Canadian Chris Hadfield blasts off into space for 3rd time

Canadian astronaut Chris Hadfield blasted off into space this morning aboard a Soyuz spacecraft and is on his way to the International Space Station, where he is set to make history.

'It makes me want to shout, and laugh and do cartwheels,' astronaut says 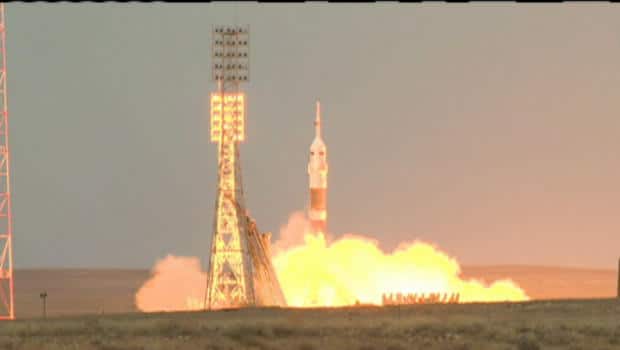 Canadian astronaut Chris Hadfield blasted off into space this morning aboard a Soyuz spacecraft and is on his way to the International Space Station, where he is set to make history.

Hadfield, American Tom Marshburn and Russian Roman Romanenko lifted off at 7:12 a.m. ET (6:12 p.m. local time) in the freezing steppes of Baikonur, Kazakhstan, where temperatures were hovering around –30 C.

The astronauts could be seen waving, and giving the thumbs-up inside the spacecraft.

Just a few hours after the launch, Hadfield's sons took over their father's Twitter account and posted a message. "The Soyuz launch was an incredibly emotional experience," they wrote. "Godspeed, Dad. Your achievement has literally brought us all to tears."

The current Soyuz is an upgraded version of the unmanned spacecraft first used by the Soviet space program in 1966.

All three had been in Baikonur for the past two weeks to prepare for the trip, which includes a two-day journey to the International Space Station, where they will be in orbit for five months. Hadfield will take over command of the ISS in March — the first time a Canadian has done so.

"Yes I'll take it seriously and yes it's important for Canada, but for me as just a Canadian kid, it makes me want to shout and laugh and do cartwheels," Hadfield told CBC News recently.

The crew will spend 147 days in orbit before their scheduled landing on May 14.

Canadians at home and abroad will be watching Hadfield's journey closely. Gov. Gen. David Johnston joined other officials at the Canadian Space Agency east of Montreal on Wednesday to watch the spacecraft carrying the Canadian astronaut blast off.

"What a great day to be here at the Canadian Space Agency, a great day for Canada, a great day for the world of discovery and innovation," Johnston said. "We're so proud that Chris Hadfield is now up in space, the first Canadian to be commanding the space station."

Former Canadian astronaut Robert Thirsk, who also watched the launch from the space agency, added, "Pride is what I feel. I'm part of this Canadian astronaut corps which has existed for over a quarter century now. We've taken small baby steps which have culminated today."

Hadfield, a Milton, Ont., native, still can’t believe what he's about to do.

"You expect someone to come in and go, 'Wait a minute, you aren't a guy that could command a spaceship, come on.' You expect to get busted by somebody because it's just such an unlikely thing to ever happen in your life, and so it absolutely thrills me just as a person."

For Hadfield, it’s a pinnacle of achievement that’s been 20 years in the making.

A Canadian Forces fighter pilot with a mechanical engineering degree from the Royal Military College in Kingston, Ont., Hadfield was chosen to become one of four new Canadian astronauts in 1992.

Among his many influences, he names the movie 2001: A Space Odyssey and the TV series Star Trek, recalling that one of his childhood heroes was fictional: "You know, James Tiberius Kirk commanding the Enterprise."

"I instead feel an obligation to fulfil this role, to do this thing right. I would not have felt hard done by if I didn’t get a third space flight."

Nonetheless, he is going on another space journey and orbiting for six months — quite long for a human body, which means the muscles, the heart and bones tend to atrophy.

Marc Garneau, the first Canadian to shuttle into outer space, says he's proud of Hadfield's accomplishments and wishes him well.

"This is a first," he said Tuesday. "The first [Canadian] commander of the International Space Station."

Thirsk, the last Canadian astronaut to go into space for a long-duration flight, said he had offered one piece of advice to Hadfield: enjoy it.

"Just to enjoy the fact that you're up there. Take time to look out the window, fly around like Superman.… Make sure you enjoy those moments. That's what you'll miss the most when you come back home."

One of the things Hadfield is looking forward to aboard the ISS is a special song set to premiere on Feb. 8, which will be featured on CBC-TV, radio and CBCMusic.ca

"It'll be really nice to be able to play music, to try and capture the experience as best I can," Hadfield said of his song about space flight, Is Somebody Singing? or ISS, which he wrote with Ed Robertson of the Barenaked Ladies.

Starting in January, CBCMusic will team up with Hadfield and Robertson to produce a series of blog posts, behind the scene photo galleries and playlists.

Also while aboard the ISS, Hadfield will also be involved with more than 130 experiments, including Microflow, a Canadian blood-sampling experiment that he compared to a hospital in a box.