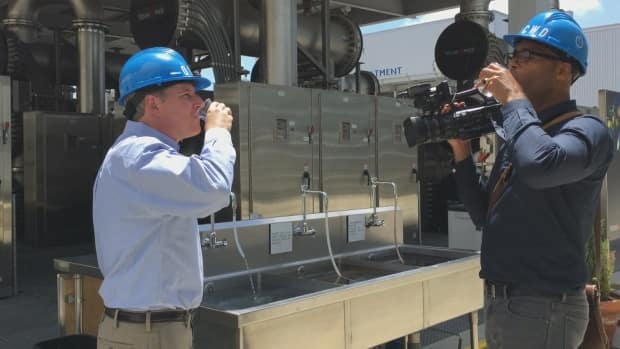 5 years agoVideo
2:04
Denis Bilodeau, Orange Country District VP, gives a tour of a recycling plant that can turn sewage into drinkable water. How does it taste? 2:04

The liquid in the trough below looks remarkably like iced tea. But trust me, you don't want to drink it.

"This is the first step of our treatment process," says Denis Bilodeau, vice-president of the Orange County Water District, on a metal catwalk next to a canal of municipal sewage.

Water is precious in the drought-plagued region, and this massive water recycling plant in Fountain Valley, an hour south of Los Angeles, was built to convert raw sewage into drinkable H20.

The brown liquid begins to bubble. Then it will be drawn into straw-like filters 1/300th the size of a human hair.

"That will keep all of the bacteria and viruses out," Bilodeau says.

The sewage will go through reverse osmosis and then be treated with intense UV light from bulbs manufactured by Ontario company Trojan UV.

" It's actually clean down to the atomic level, where all we have left is the H20 molecules," Bilodeau says. "And now this plant produces enough water to serve 800,000 people."

Got any more sewage?

According to the Orange County Water District, the facility is the largest of its kind in the world. Built in 2008, it has already gone through one expansion, and now Bilodeau says they're preparing for a second.

"Our only limiting factor now is that we need more sewage water to process," Bilodeau says. "Here in Orange County we actually have less sewage than we did 20 years ago because of all of the water conservation that takes place with low-flow toilets and low-flow shower heads."

Urban Californians are using a third less water than they were two years ago. But letting lawns go brown and fountains go dry isn't enough. Many here realize that at home they have to not just use less, but re-use more.

That's why Laura Allen decided to modified some of her appliances. Half of California's urban water is used on landscaping. But the garden at her apartment building gets most of its water from its sinks and washing machines.

As she washes her hands, the dirty water is piped from the sink into small underground reservoirs covered with small round covers. Water trickles out of the pipe and into the reservoir through a layer of wood shavings.

"The greywater flows through, it soaks through the wood chips. And they are actually the filter, so they catch all the lint or debris in the water, and the greywater soaks down into the soil," Allen says.

The washing machine, too, has been retrofitted with a simple valve.

"One side of the valve sends the water back to the sewer or the septic, the other side goes into our irrigation system," Allen says. "You have to make sure you're using plant-friendly products… if you use that, the water's great quality for irrigation."

As founder of the group Greywater Action, she now teaches people how to install their own water recycling systems, which are becoming more popular as Californians become more aware of the drought and receive generous incentives from water utilities.

"Generally speaking, you can save 16 to 40 per cent of your water consumption," Allen says.

That's about 56,780 litres a year for an average household. Which is helpful, but some cities are starting to think a lot bigger.

This week, the the Metropolitan Water District of Southern California presented a plan to develop a water recycling plant in the Los Angeles area that could provide enough water for 300,000 people for a year. It would be even bigger than the mega-plant in Orange County, which generates enough to cover a quarter of the needs of the district's more than two million residents.

"Once we explain to people that the water we create here is actually cleaner than bottled water or what's in their tap," Bilodeau says, "then they understand that this water is very safe to drink."

Except no-one will actually drink this water — at least not right away.

Regardless of how much the water is filtered, health officials here still don't allow it to go directly from toilet-to-tap.

"We're very mindful that perhaps the public isn't quite ready for that step yet," Bilodeau says.

Instead, it'll be piped underground to replenish California's dwindling groundwater, which may eventually get drawn back into the municipal water supply.

But he's certain that soon Californians will have no choice.

"The future is here," Bilodeau says.