The recycling symbol may give the comforting impression that your plastic pop or water bottle will be recycled into other plastic bottles again and again. Unfortunately, there’s a good chance it won’t become even one new bottle. Here’s what really happens — and what's needed to boost recycling.

They're usually turned into carpets and pillows, but 100% recycled bottles do exist

The infinite triangular loop of arrows that we know as the recycling symbol adorns millions of plastic pop and water bottles we carefully sort in the blue bin. It comforts us with the idea that each one will be recycled over and over again forever.

But unfortunately, most of the time, it's a lie.

Many bottles aren't recycled at all, and those that do get recycled usually aren't turned into other bottles or recycled again after that.

Instead, they end up in the world's landfills — or worse, in the ocean. In Canada, plastic bottles and caps were the top plastic trash items collected during shoreline cleanups in 2019, just behind cigarette butts. They're also typically among the top three items in shoreline cleanups worldwide.

That's led some people to question why drinks are still sold in single-use plastic bottles at all.

Here's a closer look at what actually happens to those bottles after use and what needs to happen to boost recycling in the future.

How recyclable are plastic drink bottles?

The plastic used to make water and pop bottles is polyethylene terephthalate or PET, which is also known as No. 1 plastic. The number is its "resin code," which often appears in a triangle that resembles the recycling symbol. It's technically one of the most recyclable plastics in use today.

While many plastics degrade in quality when recycled and can only be recycled once or a handful of times, "PET is the one plastic you can recycle over and over again," says Michael Schedler, a plastic recycling consultant who has worked in the industry for decades.

How much is actually collected for recycling?

In Canada, where most communities have blue box programs that accept PET,  there was a  79 per cent recovery rate for PET bottles and jars in 2015, says a 2017 study commissioned by the Continuous Improvement Fund. The fund is supported by Ontario municipalities and Stewardship Ontario, a non-profit recycling organization funded by manufacturers.

That's not bad, but bottles and jars aren't the only things made from PET — so are grocery store clamshell containers for things like berries and muffins, known in the industry as "thermoforms." Those make up only a fraction of PET products, but have a recovery rate of just 11 per cent.

It's also worth noting that Canada represents a fraction of plastic bottles sold in North America, and the recovery rate is much lower in the U.S. — just 29 per cent in of plastic bottles were recycled the U.S. in 2017, according to the National Association of PET Container Resources.

Does all plastic collected for recycling get recycled?

Not necessarily, especially when it comes to waste collected at a business or institution rather than from someone's home, as CBC's Marketplace showed in an investigation last September.

Watch the episode to find out what the investigative team discovered: 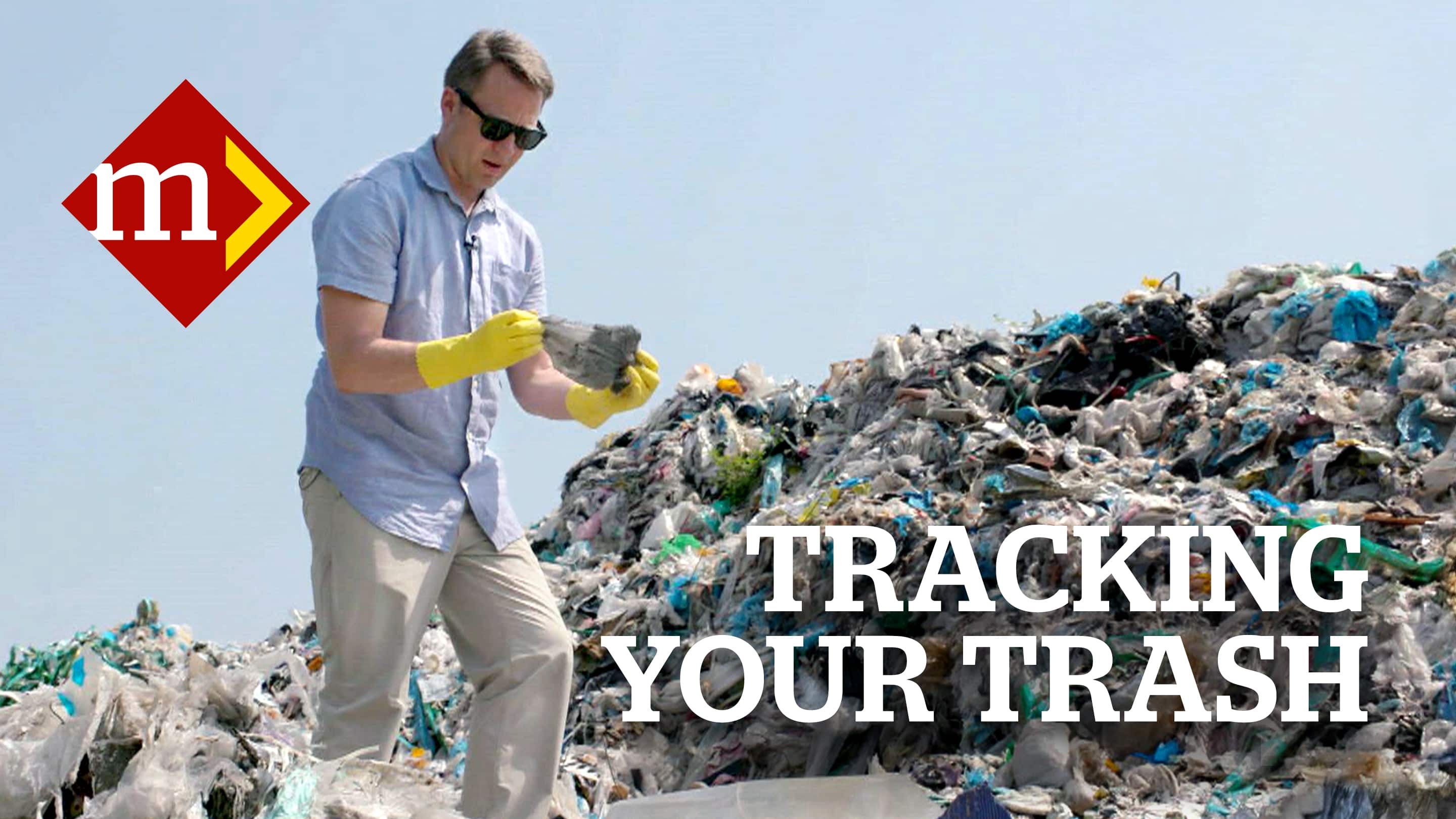 1 year ago
20:31
Should you even bother recycling? We go undercover, posing as plastic brokers in Malaysia, to expose the lucrative recycling business. And we buy and track your plastic waste to see where it really ends up. 20:31

What does recycling PET involve?

Plastic bottles collected in your blue bin are typically sent to recycling plants called materials recovery facilities that sort them from other recyclables and package them into bales.

Bales of recovered PET are typically purchased by five Canadian "reclamation" plants that wash them, grind them up, and sell the recycled PET or rPET.

What happens to the recycled PET?

Nearly half of Canada's recycled PET in 2015 was sold to the U.S. as "fibre," which means it gets turned into things like carpets, stuffings for pillows and futons and the occasional fleece sweater.

"Fibre has always been the largest application for recycled PET," says Michael Schedler, the Vermont-based plastic recycling consultant who produced the report for the CIF.

Why is most PET turned into fibre, not bottles?

The PET used in bottles generally needs to be clear, colourless and free of contaminants from things like labels. For other applications, those things don't matter as much.

In fact, that's one argument that's been used by the beverage industry as to why they shouldn't increase the recycled content in their bottles.

"Bottle-to-bottle recycling uses more energy and financial resources to sufficiently clean material to meet quality and safety specifications than is required by carpet and fibre applications," wrote Joan Archer, then president of the Minnesota Drink Association in a 2001 opinion piece.

Because a higher grade of PET is needed for food and beverage containers, it tends to be more expensive.

Can recycled PET be recycled again?

In the case of bottles, yes.

But once it's turned into carpets or pillows, it's probably destined for the landfill.

On the other hand, Schedler notes that such items have quite a long lifespan compared to a plastic water bottle.

On average, how much of drink bottles is recycled plastic?

The average recycled content of PET bottles in Canada was only 19 per cent in 2015, Schedler's study found.

However, since 2010, one Ontario-based company, Ice River Springs, has been using 100 per cent recycled plastic bottles for both its own brand and store brands that the company is commissioned to produce.

Crystal Howe, the company's sustainability manager, says the company buys about 80 to 85 per cent of PET plastic collected from recycling programs in Ontario.

In general, virgin PET — made directly from raw materials derived from fossil fuels — is cheaper and easier to source than recycled PET.

Schedler says many large beverage companies want to sign very large, long-term contracts for their plastic. That's generally not possible for recycled PET, which is sourced from many different recycling and bottle deposit programs of variable quality that depend on what people put in the bin.

"Whatever you plan on today, something different could be in the bale tomorrow," Schedler says. "Everyone wants stability."

The supply of recycled PET in North America also typically outstrips demand, Schedler says, and that makes it difficult to ensure the quality of the recycled PET is high enough for bottles.

So is recycling bottles into bottles worth it?

Ice River Springs thinks it is.

Howe says the company has found bottle-to-bottle recycling reduces energy use by 70 per cent and water consumption during manufacturing by 99 per cent.

"It doesn't make it cheaper, but it makes it better," she added. "Anytime you can recycle a bottle back, you are gaining another life for that plastic."

The company has addressed some of the business challenges by starting its own plastics recycling company, Blue Mountain Plastics, which buys bales of bottles from municipal recycling programs — mostly in Ontario — and processing it into rPET itself.

But, Schedler thinks bigger beverage companies also need to be held accountable for the waste they generate.

"At the end of the day, they've made the decision to put the containers out there," he said.

He also sees the shortage of recycled PET as a "convenient argument," but he doesn't buy it — he thinks they would be able to get what they need if they were willing to pay more for it. After all, at the moment, most PET bottles in North America go directly to landfill.

What are big beverage companies doing to increase bottle recycling?

Many large companies have set higher targets for recycled content in their bottles.

The Coca-Cola Company, Keurig Dr Pepper, and PepsiCo have also committed $100 million US to the American Beverage Association initiative called "Every Bottle Back" that aims to increase public awareness of recycling, modernize recycling infrastructure in the U.S., and reduce plastic use.

What could be done to encourage more PET plastic recycling?

There are a few options:

Extended producer responsibility: These are laws that require manufacturers that generate waste such as plastic bottles to help support recycling financially. Some recycling programs in Canada already have partial or full EPR.

Deposit-return laws:  Requiring people to pay a deposit when they buy beverage bottles and getting it back when they return it will result in a higher recovery rate and higher-quality, less contaminated plastic, Schedler says.

More recycling bins in public places: Howe suggests that having more recycling opportunities away from home at places such as gas stations would help boost recycling rates.

"That would send a very clear signal to the market," he said, noting that companies are less concerned that recycled plastic is more expensive than virgin plastic if a certain amount of recycled content is required by law.

Similar laws in California for the plastic used in laundry jugs — HDPE — have kept the supply and prices for recycled material much more stable, he added.

"I think what happens," he said, "is you get a more sustainable situation."