Watch a human paraglide through a starling-filled sky

Spanish paraglider Horacio Llorens flies with the 'Black Sun' - a biannual gathering of up to a million starlings that swoop together through the skies of Denmark. 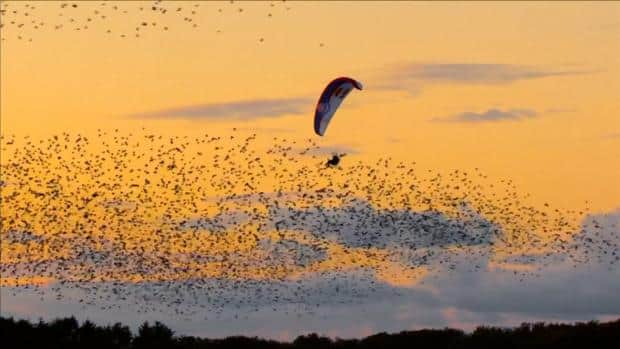 Paraglider dances in sky with thousands of starlings

3 years agoVideo
1:05
Man wanted to experience the annual murmuration of birds from a new perspective 1:05

Paraglider Horacio Llorens became part of a flock of starlings to embrace his dream of flying like a bird.

Last month, the 35-year-old Spaniard and five-time aerobatic paragliding world champion travelled to Tondermarsken in southern Denmark to witness the natural phenomenon called the "Black Sun." Twice a year, in spring and fall, migrating starlings from Norway and other countries surrounding the Baltic Sea gather and form great clouds of up to a million birds, creating mesmerising dances in the sky.

Llorens flew at the heart of the flock. In video published by Reuters today, he changed direction with the birds at every twist and turn.

He called the experience a "dream come true."

"The feeling of flying with this flock of birds was different from anything I did in my life," he said. "I felt I was part of the flock."