As forest fires rage, experts worry about the future of the Amazon

As of Thursday, there are more than 165,000 fires burning in the Amazon rainforest. The alarming part, however, is that a significant number of them — more than 75,000 — are burning in Brazil, which some experts fear will have dire consequences.

As of Thursday, there are more than 165,000 fires burning in the Amazon rainforest — and a significant number of them, more than 75,000, are burning in Brazil.

The Amazon spans more than 5.5 million square kilometres, is home to roughly 40,000 plant species, 1,300 bird species and 2.5 million species of insects. And it is in crisis, experts say.

And what's making it worse, say some, are some of the economic and environmental policies put in place by the Brazilian government under the leadership of President Jair Bolsonaro, a far-right politician who has questioned the existence of climate change.

"This is the time of year when farmers set fires for cultivation and farming," said Christian Poirier, program director at Amazon Watch, a non-profit organization that advocates for the protection of the rainforest. 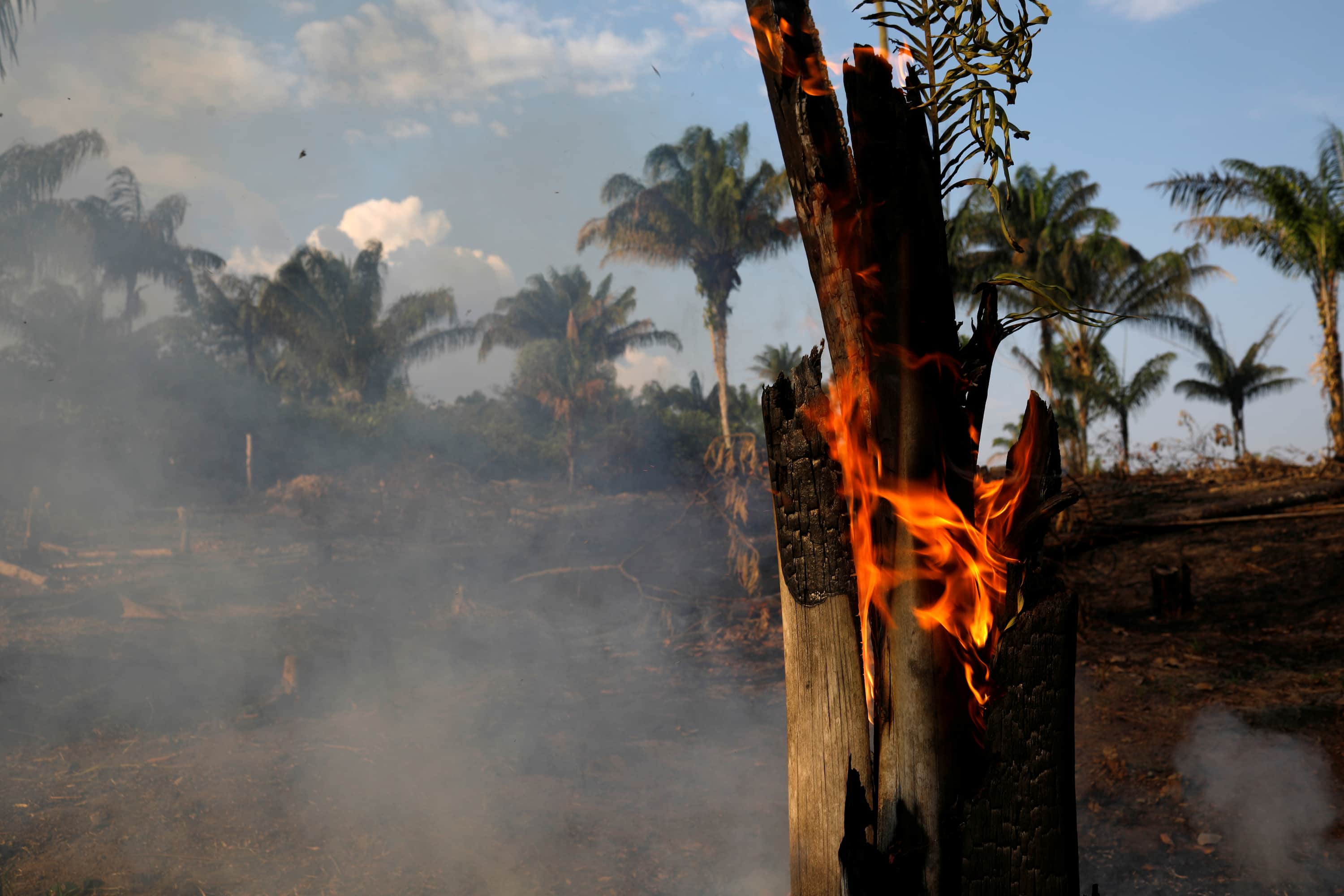 2 years ago
1:32
Tens of thousands of fires are burning across the Amazon rainforest, some naturally occurring, some intentionally set. 1:32

While some of the fires are naturally occurring, Amnesty International has also documented a number of arson attacks, allegedly by illegal loggers, miners and cattle ranchers, in Indigenous territories in the Amazon this year, including in Rondonia state, said Kumi Naidoo, Amnesty's secretary general.

Federal prosecutors in Brazil said Thursday that they will investigate the rising rate of deforestation and increase in wildfires to determine whether there has been reduced monitoring and enforcement of environmental protections.

Meanwhile, Bolsonaro and his administration say media organizations are exploiting the fires to undermine his government. The Brazilian president also said there was a "very strong" indication that some non-governmental groups could be setting blazes in retaliation for losing state funds.

He did not provide any evidence, and NGOs dispute the claim.

Filipe Martins, an adviser to Bolsonaro, said on Twitter that the Brazilian government is committed to fighting illegal deforestation, and that many other countries are causing environmental damage in the Amazon.

1. So you think the Amazon is in danger and that you should pray to save it? A piece of advice: the first thing you should do is stop spreading lies, since lying does not only harm the real efforts to protect our forest, but also compromise your prayers — God does not like liars.

With Brazil holding roughly 60 per cent of the Amazon rainforest, there are concerns about what effects the fires will have ecologically and environmentally, particularly their potential to accelerate climate change.

Bolsonaro has opened up the rainforest for more development. He's also transferred responsibility for the demarcation of Indigenous lands to the Agriculture Ministry, a move that some compare with a fox guarding the chicken coop.

"If you compare to last year's numbers, in the first seven months, there's been a 60 per cent jump in deforestation," Poirer said. "What we're seeing here is a direct result of mismanagement — the intentional environmental mismanagement by this government."

Bolsonaro has also been accused of turning a blind eye to illegal practices by farmers and those looking to make money from tearing down trees.

"It's extremely dangerous in that it gives carte blanche to illegal foresters, to land-grabbing mafias and illegal miners, who are now operating with impunity," Poirier said. "And we see fires as a result of that."

On Thursday, French President Emmanuel Macron took to Twitter to call the Amazon fires an "international crisis" that should be discussed by the G7 summit that will begin on Saturday in Biarritz, France.

Prime Minister Justin Trudeau tweeted that he could not agree more, saying "I couldn't agree more, @EmmanuelMacron. We did lots of work to protect the environment at the #G7 last year in Charlevoix, & we need to continue this weekend. We need to #ActForTheAmazon & act for our planet — our kids & grandkids are counting on us."

Bolsonaro responded angrily to what he regarded as meddling.

"These countries that send money here, they don't send it out of charity... They send it with the aim of interfering with our sovereignty," he said in a Facebook Live broadcast.

The Group of Seven countries does not include Brazil.

What's worrying is that the consequences don't just end at Brazil's border.

The Amazon is a unique and important part of Earth's ecosystem. It has a large influence on not just its immediate surroundings, but it also exchanges a large amount of energy and water with the atmosphere.

"The Amazon rainforest is somewhat anomalous in that it is the biggest system of its kind on the planet in terms of how it feeds itself water," said Kai Chan, a professor at the University of British Columbia's Institute for Resources, Environment and Sustainability.

It works like this: the trees of the Amazon suck water out of the forest floor. In turn, every leaf releases water into the air — think of it as sweating — and then that water travels through the atmosphere, creating what some term "rivers in the sky."

Finally, clouds form, it rains and the process starts over again. It's called evapotranspiration.

The problem is, disruption of this process can have consequences thousands of kilometres away. So, as fires burn and more and more of the trees are lost, the balance is threatened.

"The feedback cycle isn't just sustaining rainforest but affecting the rain cycle elsewhere," Chan said. "If it breaks down, it will have major implications … it's a massive issue."

And this also has an impact on climate change.

"We are very concerned about these fires," Stephane Dujarric, spokesperson for the secretary general of the United Nations, said Thursday.

"Both for the immediate damage that they are causing and also because sustaining forest is crucial in our fight against climate change."

The forests of the world act as carbon sinks, absorbing carbon dioxide. In the case of burning forests, carbon dioxide gases are being released while at the same time, the trees that were once carbon sinks are lost.

Some fear we are nearing a tipping point, and that if left unchecked, more deforestation will turn Earth's lush Amazon into a savannah, with drier conditions and grasses replacing the leafy canopy of trees.

"If we lose a few more percentage points of rainforest, we're at risk of losing this whole system," Chan said.

"And if we do reach that tipping point and the Amazon starts to shift toward being more savannah-like, that will affect precipitation ... it will have a major impact on the global scale."

Both Chan and Poirier said that action is needed on a governmental scale and an individual scale.

If Bolsonaro is forgoing Brazil's role in preserving the Amazon in order to make way for economic prosperity, they say, countries have the power to stop importing goods from Brazil.

"This is not just a made-in-Brazil problem," Chan said. "We're contributing by consuming products from these actions."

Already, Germany froze roughly $51 million US that was to be used for sustainability projects in the Brazilian forest. Norway suspended $47 million in contributions to the Amazon Fund, a Brazilian organization dedicated to fighting deforestation.

"We cannot allow the irresponsible and reckless government of [Brazil] to destroy what is essential to Brazil and to all this planet," Poirier said.

with files from Reuters and The Associated Press