Fort McMurray wildfire burning so hot, only weather can stop it

The raging wildfire that has forced the evacuation of Fort McMurray, Alta., and engulfed parts of the community is the kind of blaze that firefighters dread, and experts fear such fires could become more common.

'Perfect storm' of factors makes Alberta wildfire a powerful force, but such fires could be 'the new normal' 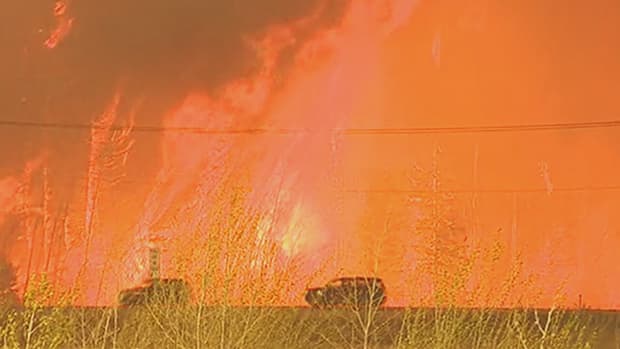 The science of fire: Bob McDonald

5 years agoVideo
4:29
How was the Fort McMurray wildfire able to spread so quickly? 4:29

The raging wildfire that has forced the evacuation of Fort McMurray, Alta., and engulfed parts of the community is the kind of blaze that firefighters dread, but could become more common, according to experts.

Alternatively described by officials as "catastrophic," a "multi-headed monster" and a "dirty, nasty" fire, the blaze is at least 80,000 hectares in area and has destroyed more than 1,600 structures. It could threaten the entire town, the fire chief told reporters.

The wildfire became so intense Tuesday that the heat limited air operations over the affected areas. More than 150 firefighters are battling it on multiple fronts, with hundreds more from other provinces scheduled to arrive in the coming days. 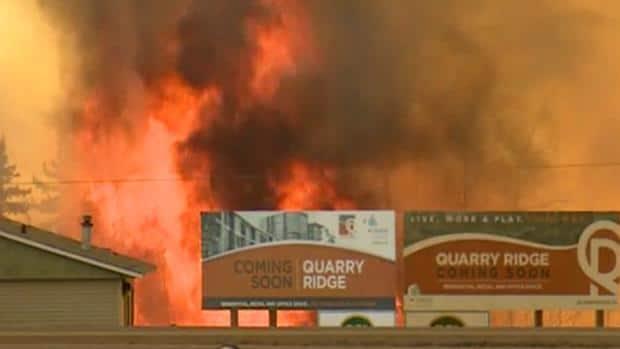 Anatomy of a wildfire

5 years agoVideo
0:59
How the Alberta blaze went from ember to inferno 0:59

Temperatures are expected to remain high, with a glimmer of hope on the horizon as a cold front approaches. It could, however, bring lightning with it, possibly starting more fires. It is a nearly impossible situation.

The blaze is an extreme example of the power of Mother Nature, but offers some interesting lessons about the science of wildfires.

'A perfect storm' of fire

The conditions that preceded the start of this fire were quintessential wildfire conditions: a seemingly endless supply of dry fuel on the forest floor and in the canopy, and intense heat. All that was needed was a spark, and whether it was caused by human error or lightning (an investigation is underway), once the spark was there, the fire became a beast.

"You hate to use the ​cliché, but it really was kind of a perfect storm," says Mike Wotton, a research scientist with the Canadian Forest Service and professor at the University of Toronto.

"There was a mild winter and not a lot of meltwater from the mountain snow pack. Now, a stale air mass has been sitting over Alberta, and it led to very low humidity. Then there was an early, hot spring, and everything got very dry. Then on top of that, it got windy."

The fire, burning between 800 C and 1,000 C, was first spotted when it was about 500 hectares in area (with each hectare about the size of a rugby pitch). It became what's called a crown fire, which occurs when the tops of conifers, which tend to burn more easily than deciduous trees, become engulfed and the flames spread through the canopy.

"That's when you start to see the 100-metre-high flames," said Mike Flannigan, professor of wildland fire at the University of Alberta in Edmonton.

The fire was likely moving at a speed of up to five kilometres per hour and quickly became difficult to manage.

Many fires in the Boreal forest are extremely unpredictable. The fire front, the area where it's burning most intensely, is so hot, that crews can't attack it from the front.

Sometimes the fire front can be hundreds of metres long, according to Flannigan, so crews have to work at its flanks. Aerial attacks become less effective because they aren't hitting the core of the fire.

For example, on Tuesday, firefighters were unable to fly over the fire front of the Fort McMurray wildfire because it was too hot and too smoky, according to Alberta emergency officials.

"This really shows that once a fire like this is up and running, the only things that are going to stop it is if the weather changes or if it runs out of fuel to burn up," says Flannigan. "With a fire like this, it's burning so hot that air drops are like spitting on a campfire. Water and retardant might slow it down, but probably not much."

The wildfire that has destroyed parts of Fort McMurray managed to cross two rivers and spawned so-called hot spots all around the affected area, and officials said that has put a terrible strain on crews.

The wildfire is burning so intensely at its front that burning sticks, vegetation and embers are belched out of it and carried by the wind, starting brand new fires. If the wind changes direction, it can be disastrous.

During the massive 2011 fire in Slave Lake, Alta., there were examples of spot fires starting in populated areas more than two kilometres from the fire's front.

Another complicating factor is that the latest fire started close to and moved into Fort McMurray, forcing the evacuation of about 88,000 people. The "wildland-urban interface," as Flannigan called it, is fraught with danger.

'The new normal' for wildfires

According to Natural Resources Canada, the mean number of wildfires each year in Canada for the last 25 years has been about 8,300. An average of about 2.3 million hectares burns each year, but recent years have seen more destructive fires in terms of area covered.

In 2014, for example, more than 5,100 forest fires burned over 4.5 million hectares. Last year, nearly four million hectares had been scorched by around 6,700 fires by early September, and fire season continues from late April to late September, depending on the region.

"Climate change models and research all point to the idea that fire season is going to be longer in the coming years, and the fires will be more severe," says David Andison, adjunct professor with the faculty of forestry at UBC.

"It will really just be the new normal."

Many agencies have started taking an approach that focuses only on wildfires that could threaten urban centres or important infrastructure. Only three per cent of wildfires in the boreal forest grow to be more than 200 hectares, but that three per cent accounts for 97 per cent of the area burned each year, according to Natural Resources Canada.

It's not just a resources problem, but rather a new approach to fire management. Wildfires are a key part of the ecological cycle and provide an opportunity for new growth and the evolution of ecosystems. Instead of trying to suppress every fire, an assessment is made, and if it can burn without any damage to populated areas, it will be left alone.

"As tragic as this is in terms of property damage, and costs and stress, fire is still a natural process in the forest and the outcome of this will be a young, vibrant forest ecosystem," says Andison. 5 years agoVideo
1:20
Daybreak reveals the extent of the wildfire damage 1:20