Scientists have discovered seven Earth-sized planets orbiting a small star 39 light-years away, with several planets believed to be capable of having water.

'We have made a crucial step toward finding if there is life out there,' researcher says 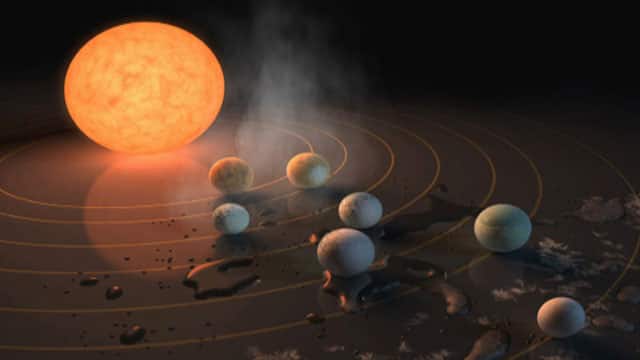 4 years ago
1:46
Seven Earth-sized planets, all of which could contain water, have been found orbiting a small star 39 light-years away 1:46

Scientists have discovered what looks like the best place so far where life as we know it may exist outside our own solar system.

Seven Earth-sized planets, all of which could contain water, have been found orbiting a small star 39 light-years away.

"We have made a crucial step toward finding if there is life out there," said Amaury Triaud, co-author of a study published Wednesday in the science journal Nature.

"I don't think any time before we had the right planets to discover and find out if there was.

"Here, if life managed to thrive … then we will know. Before, it was indication; now, we have the right target."

The discovery is the first of its kind. Never before have so many Earth-like planets been found orbiting a single star.

This new system, which orbits a small, ultra-cool star known as TRAPPIST-1, was first discovered in May 2016. At the time, only three planets were confirmed. TRAPPIST is short for Transiting Planets and Planetesimals Small Telescope.

However, further study revealed four more, all of which are the right size, mass and distance from the sun to hold water. Models reveal that three of the seven have the best chances of containing water.

The star, with a mass that is just eight per cent of our own sun's, is no bigger than Jupiter, with the planets all orbiting extremely close to the parent star. If they were in our solar system, they would all be within the orbit of Mercury. As a result, there is no chance of direct observation.

Astronomers use several methods to find planets, known as exoplanets, orbiting other stars. One method is by using extremely sensitive equipment that measures the dip in light as a planet crosses in front of the star, known as a transit.

It was this particular method that the astronomers used to study the system. They utilized several ground-based and space telescopes, including the Spitzer Space Telescope, which sees in infrared light, and the Hubble Space Telescope.

The orbits of six of the new planets, which go by the names TRAPPIST-1b to 1h, have all been calculated. Less is known about TRAPPIST-1h, however, as it has only crossed in front of the star once during the 900 hours of observations.

The planets are believed to have formed farther out and then migrated inward, forming a "train of planets," lead author Michaël Gillon said. They are also all tidally locked, meaning that one side always faces the star, just as one side of our moon always faces Earth.

The planets orbit so closely that if a person were standing on one, they would see planets crossing the sky, sometimes larger than our own moon. To travel between them would take days or weeks, instead of months and years in our solar system.

And while the star is considerably dimmer than our own sun, we would still be warmed by the infrared heat from the salmon-coloured star.

"It would be a wonderful view on this planet," Gillon said on Wednesday.

The star is considered young, at just half a billion years old. However, this type of star will far outlive our own sun, lasting for 1,000 billion years, the researchers said.

The researchers said that the dimness of the TRAPPIST-1 provided a unique opportunity to search for more planets. For the most part, exoplanet research — such as that done by the Kepler Space Telescope — has focused around large, bright stars, mainly because large worlds would be easier to detect as they pass in front of their host star.

It takes a daring person to say "We're the only one where anything interesting is happening." That's a bit self-centred, I'd say.- Seth Shostak, SETI Institute

But if you're looking for smaller worlds, a smaller, dimmer star might be a good place to search, the astronomers said.

As for searching for intelligent life in the system, the jury is still out.

The SETI Institute, which searches for signs of intelligent life, turned its Allen Telescope Array to the TRAPPIST-1 system last year. It didn't find any signal. But that doesn't mean there isn't a chance that they might get one.

"I think we'll do it again, now that there are seven planets," said Seth Shostak, senior astronomer at SETI. "I think that's an interesting story because that could indeed be a small little galactic empire right there."

Even without a signal from this particular system, SETI has been studying these red dwarf stars for some time. There is a project underway to study 20,000 of them within the next two years.

Shostak said the discovery is hopeful.

"It shows that there's just an awful lot of territory on which you could have life," Shostak, who was not involved in the study, said. "When you have tens of billions of habitable worlds — moons and planets — just in our galaxy, that's a stunningly large number of worlds where there could be life. It takes a daring person to say, 'We're the only one where anything interesting is happening.' That's a bit self-centred, I'd say."

The new findings raise hope that further systems are waiting to be discovered, the researchers say. And it's something that astronomers and exoplanet hunters are eager to explore.

"We actually have a planetary system with many options to look for signs of water and signs of life. We couldn't say that before," exoplanet researcher Sara Seager, who was not associated with the study said.

"And when there's one, there's more. In exoplanet research … the hope is that there are more out there just waiting to be found."

The discovery also allows astronomers to study the atmospheres of these planets, something that the researchers have already begun doing, they say.

They will use Hubble, and later the James Webb telescope which is set to launch next year, to find signs of methane, carbon dioxide, oxygen or ozone, which could indicate that these are truly habitable planets.

Gillon said that it's an exciting time in planetary research.

"The story is just beginning," he said.