He has been humiliated and mocked, and repeatedly frustrated and undercut by his own boss. But the hiring of a new White House communications director seems to have been the final straw for Sean Spicer, who announced on Friday he will abandon his post as Donald Trump's press secretary after a tumultuous six-month stint.

Could anyone communicate effectively for Trump? The press secretary tried his best for 6 months

He has been humiliated and mocked, and repeatedly frustrated and undercut by his own boss. But the hiring of a new White House communications director seems to have been the final straw for Sean Spicer, who announced on Friday he will abandon his post as Donald Trump's press secretary after a tumultuous six-month stint.

But Spicer's exit comes as no surprise for those who felt that his days in the Trump White House were numbered months ago.

"This was the opportune time to go — and go with the least egg on his face," Republican strategist Evan Siegfried said.

According to news reports, Spicer quit in protest over the hiring of the new director of White House communications, New York financier Anthony Scaramucci, who Spicer believes lacks qualifications for the job.

And while Trump reportedly asked Spicer to stay on as press secretary, Siegfried believes that the president never gave any serious thought about rejecting his resignation "in any way, shape or form."

Some questioned whether the arrival of Scaramucci was Spicer's so called "red line." Despite all the other scandals and controversies of the administration, it was the hiring of this man that meant he could no longer in good conscience remain on the Trump team.

But his departure was likely a culmination of factors, a mutual decision owing in part to his tenuous relationship with Trump, who would present a challenge for any press spokesperson.

"I don't think there was ever any great bond or chemistry between the two, but I think, most importantly, it is just impossible to do communication effectively for Donald Trump," said Gary Nordlinger, of George Washington University's Graduate School of Political Management. "I don't care who it is."

Spicer entered the White House at a disadvantage, in terms of being welcomed into Trump's inner circle. He was not a Trump loyalist, but part of the so-called Republican establishment, lobbied for by Trump's chief of staff Reince Priebus, who had worked with Spicer at the Republican National Committee.

"They certainly never had a relationship where they trusted one another. I would imagine both were frustrated with the other," said Siegfried.

That frustration, at least from Trump's point of view, began with Spicer's shaky debut, in which he argued with the press about the size of the crowds at Trump's inauguration. The image-conscious Trump would later let it be known that he wasn't happy with Spicer's performance or appearance, zeroing in on his suits in particular.

But Spicer's daily press briefings soon became must-watch television for political observers and casual watchers who  previously may have shown little interest in politics. Spicer seemed unusually sensitive and prickly, would get irritated quickly by the press and take a combative stance. 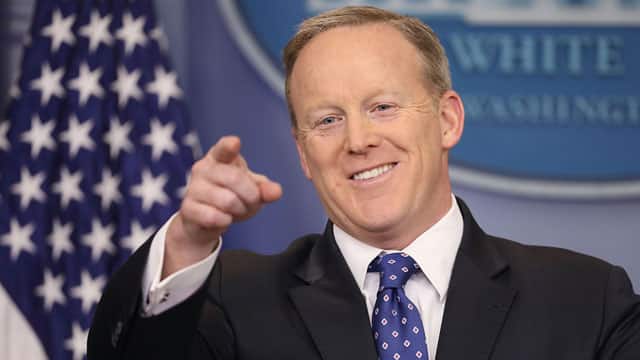 4 years agoVideo
2:23
A look at Spicer's eventful and, at times, adversarial tenure as press secretary 2:23

These testy exchanges did serve to generate unusually high television ratings. While Trump was reportedly pleased by the numbers, he was less than amused that those same briefings had made his press secretary the subject of an unflattering spoof on Saturday Night Live.

Overall, however, Trump seemed most frustrated by Spicer's role as an advocate and defender of the president.

"It's very clear that the president is a president who responds to people who go on TV and defend him and will stick it to the enemies, and Sean Spicer never really gained that inner trust of Trump," said Siegfried.

Spicer, too, had his own frustrations.

"He was having several problems, one of them was that he was having difficulty taking the president's critiques of his performance all the time," said Michael Tackett a Washington bureau reporter for the New York Times.

Spicer would be forced to go out and sell a message, and then have the president contradict him in either a series of tweets or interviews.

For example, Spicer said that Trump's ban on visitors from Iran, Libya, Somalia, Sudan, Syria and Yemen was not a "travel ban," only to have Trump later tweet that it was.

As for the firing of FBI Director James Comey, that was based on the recommendation of Deputy Attorney General Rod Rosenstein, Spicer insisted. Yet in an interview with NBC, Trump said he had made up his mind to fire Comey before the Rosenstein memo.

"When you have a guy that makes impulsive and often contradictory statements, how can you be a spokesperson for him and maintain any credibility?" said Nordlinger.

Meanwhile, Spicer's role seemed to be diminishing. The White House had not done a public press briefing in weeks, and those were being done off camera with Sarah Huckabee Sanders, who will be taking over Spicer's role as press secretary.

With the hiring of a new communications director, a role that Spicer had assumed along with his press secretary duties, it's likely that Spicer saw "the writing on the wall," said Republican strategist Ford O'Connell.

'Not going to be hurting for work'

As Trump's spinmeister, Spicer's credibility took a significant hit, say some observers. But Siegfried and O'Connell agree that In the months ahead, he will be in high demand. All three major cable news networks will likely offer him to become a contributor while publishers will pursue him to write a tell-all book.

A smart move, said Siegfried, would be for Spicer to appear on Saturday Night Live, to show that he has a good sense of humour.

"He is going to have to do some image rehab and that would be part of it."

It's unclear if Spicer's resignation is an indication of a major White House staff shakeup. But O'Connell said it is a signal to everyone in the White House staff that, whatever their role, if they are not part of the solution in helping to get legislation passed through, they could be next on the chopping block.

"I think this is a lot bigger than Sean Spicer," O'Connell said. "It's just that I think that the president feels that the communication team was not carrying its weight in terms of what he wanted to see accomplished."