While it's long been believed that octopuses are solitary animals, new research suggests that these eight-legged wonders of the deep can gather together and even interact socially with one another.

It's long been believed that octopuses are solitary creatures, but new research suggests that these eight-legged wonders can gather together and even interact socially with one another.

In 2009, researchers found a site they dubbed Octopolis, where 16 octopuses lived in close proximity in dens off the coast of Australia.

Then, in 2016, not too far from the original location, another team found a rocky outcropping where 10 to 15 octopuses were living close together. They dubbed the new site called Octlantis.

The study, published in the journal Marine and Freshwater Behaviour and Physiology, noted several octopuses chased each other, postured and even changed their colour. In one case, one octopus kicked another out of its den. 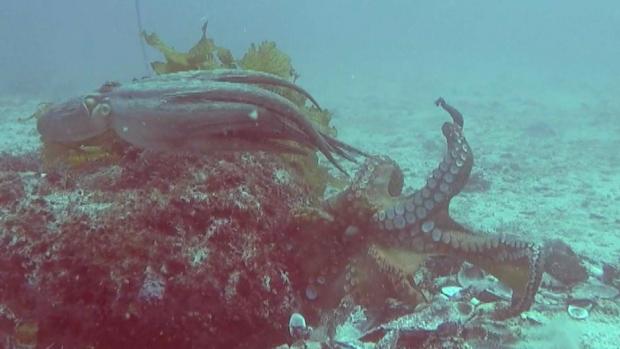 5 years ago
Duration 1:12
Cephalopod evicts competitor trying to muscle in on its turf

"It's a bit surprising to see how much they're interacting at the site," Stefan Linquist, a philosopher of biology at the University of Guelph, told CBC News.

"There's been this social dynamic happening at the site that you don't usually hear about when people are reporting octopus behaviour," he said.

"Maybe they're actually social under certain circumstances and we haven't really seen it before."

Maybe they're actually social under certain circumstances and we haven't really seen it before.- Stefan Linquist, University of Guelph

Gloomy octopuses were previously thought to be reclusive, but purposefully so. They spend most of their time in their dens and venture out only to get food, such as scallops. As soon as they grab some, they scurry back their to dens to eat.

At Octopolis, scallops were in abundance. The researchers believe that one by one, the octopuses settled in the structure close to their food source, creating what some media called an octopus "city."

The researchers, however, urge caution when using the term. The octopuses aren't purposefully interacting as a group. Rather, their interaction comes as a consequence of living in a good location near a food source.

In an addendum to their recent research, the authors note: "An aggregation of individual dwellings, even where each is intentionally constructed, is not a city. A city is a center not just of population but of commerce, culture and design. Cities are cooperatively constructed and maintained communities."

Octopolis grew around a human-made structure that gradually sunk into the ocean floor.

"Now when we go to this site...it's hard to see that structure anymore — it's really sunk down into the middle — but what we'll see is a whole bunch of little holes that the octopuses have excavated that are about 40 cm deep, and there they are doing their thing," said Linquist, who worked on the study.

Linquist said that while one might think that these octopuses could live in close proximity to one another in isolation — hiding away in their den, heading out to grab a bite and bring it back, then return —  that's not what researchers have observed in the roughly three-square-metre site.

"In fact, there's quite a lot of social interaction going on," he said.

The new research could highlight what may be normal behaviour that's just not been seen.

There is a public fascination with octopuses, as evidence mounts to suggest they are highly intelligent.

"This family — the octopuses, the squid, the cuttlefish — are just fascinating," Linquist said. "So I think I've always been drawn to them as these organisms that are so distantly related but somehow so relatable."