NASA's Juno could help us understand origins of solar system

Juno has the potential to answer questions that have been plaguing the scientific community for decades.

NASA's Juno spacecraft will begin orbiting Jupiter Monday night, and scientists are eagerly awaiting the data it will gather.

Equipped with tools to map the gas giant's magnetic field, sample plasma waves and probe the planet's deep atmosphere, Juno has the potential to answer questions that have been plaguing the scientific community for decades.

University of Toronto planetary physicist Sabine Stanley is part of a working group dedicated to the study of Jupiter.

"Our goal is essentially to build an interior model of Jupiter to try and explain its magnetic field and its velocities, and see whether or not we can explain all of the features at once," she says.

Foremost among the questions Stanley's group wants to answer is one involving Jupiter's famous bands, those stripes that can be seen through a telescope. These bands are actually jet streams of wind flowing east to west and west to east.

"Some people think that the bands of Jupiter are basically a weather phenomenon, which would mean they would be very shallow, like weather on Earth," Stanley's colleague and University of Alberta professor Moritz Heimpel says.

However, his team theorizes that the bands go very deep, to the point where the planet's magnetic field is generated.

Scientists would be able to calculate how deep the bands go by comparing the structure of Jupiter's magnetic field and gravity field, data Juno would gather.

Jupiter's deep interior is of particular interest to researchers, because little is known about the planet's core.

"There's some really fundamental questions about how planets form that can only be answered if you know what's going on deep down," says Stanley.

She says planets like Jupiter could either form by "having initial rocky cores that attract the gas that makes the huge hydrogen envelopes that surround them, or they can form from a gravitational instability where the gas just basically contracts on its own."

Juno will gather clues as to how the planet formed by taking gravity measurements, through which scientists can theorize about its centre — whether it's a huge, rocky core or mostly just a ball of gas containing a few rock elements.

Additionally, learning how much water, and therefore oxygen, is inside Jupiter will give helpful clues about its beginnings.

To measure the amount of water inside the giant planet, "they're going to use this very clever method of measuring how much microwaves are coming out from inside Jupiter and how much those are being absorbed by water inside the planet," says University of Toronto astronomy professor Michael Reid.

Previous spacecraft have photographed the gas giant, and NASA's Galileo craft actually spent eight years orbiting it. So why couldn't they give us these answers?

For one thing, Juno will be closer to the planet than any other spacecraft has been, allowing it to study the gravitational and magnetic fields in detail. Instead of orbiting around the planet's equator, as it would if, like previous missions, it was studying Jupiter's moons, it will orbit its poles. 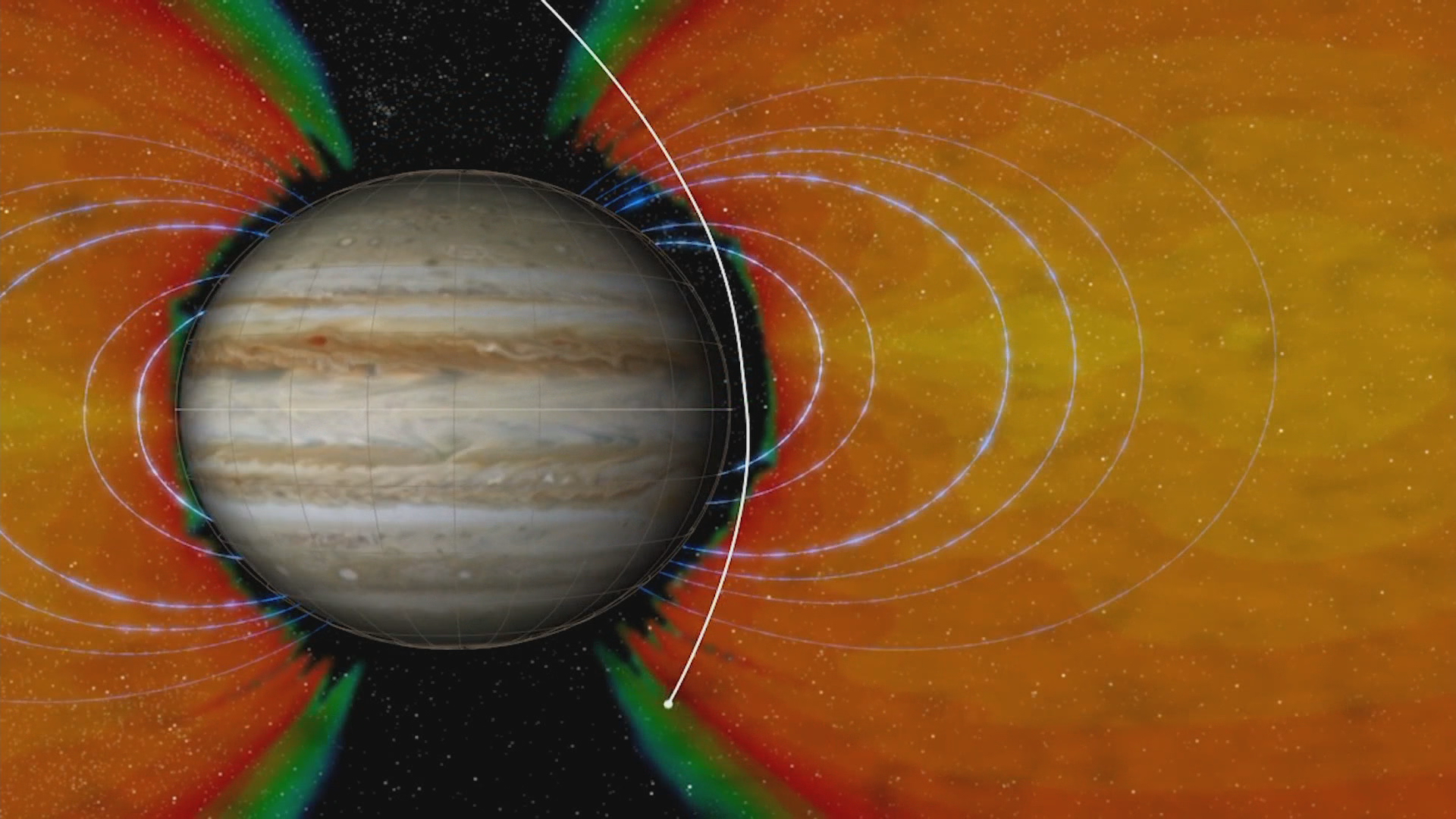 6 years ago
Duration 2:07
NASA's Juno spacecraft will begin orbiting Jupiter Monday night, and scientists are eagerly awaiting the data it will gather.

Because the spacecraft's measuring equipment will experience a change in latitude "everything is going to change much more dramatically, and we're going to see a lot more about what's going on at the surface and also the deep interior of Jupiter," says Heimpel.

Also helping it to get more accurate measurements of the planet's magnetic and gravitational fields is the fact that Juno will be coming very close to the planet, within 5,000 kilometres of its cloud tops. As NASA's Juno fact sheet puts it, "if Jupiter were the size of a basketball, the equivalent distance would be only one-third of an inch (about 0.8 centimetres)."

The Canadian researchers hope Juno's discoveries will shed some light on a relatively little-understood planet.

"Jupiter is the biggest planet in our solar system, it's certainly got most of the mass of the entire solar system aside from the sun, and we need to understand it in order to understand the planetary formation and evolution process in general," says Stanley.

Jillian writes for CBCNews.ca. Her work has previously appeared in The Globe and Mail, Metro and Chatelaine.