York Regional Police have arrested a man in connection with a hate crime investigation in the tiny village of Schomberg, Ont. People living there had printed yard signs to oppose racism, then someone stole and burned the signs proclaiming that Indigenous Lives Matter.

People living in a tiny Ontario village printed yard signs to oppose racism. Someone stole and burned them

York Regional Police have arrested a man in connection with a hate crime investigation after a small Ontario community's efforts to confront racism were reduced to ash.

Residents of Schomberg, a village of 2,700 people about 70 km north of Toronto, have been displaying about 200 signs reading "Black Lives Matter" and "Indigenous Lives Matter" on their lawns and business fronts since the beginning of July — part of a grassroots effort to express solidarity with the global wave of protests against systemic discrimination.

But late last week, someone sent a message to a community Facebook group expressing outrage over the campaign and threatening to destroy some of the signs.

Then, in the early morning hours of Aug. 11, six of the Indigenous Lives Matter placards went missing from the village's historic Main Street and were set alight in a nearby park.

On Thursday, York Regional Police staged a dramatic noon-hour raid, closing off the village's business strip, as members of the force's Emergency Response Team arrested a male suspect as he stood outside his Main St. apartment, smoking. They then carried out a search warrant on his second floor unit, looking for evidence of an accelerant, according to an officer on the scene. A police spokesperson confirmed that the force's Hate Crimes Unit has been overseeing their investigation.

The suspect's name and details of the charges have not yet been released, but sources tell CBC News that it is the same individual whose name and photo were attached to the Facebook post.

"I'm feeling quite relieved," said Susan Heslop, who administers the Schomberg Community Facebook group, and passed a screenshot of the threat on to police on the morning it was made. Heslop said an officer then called her, and said he had spoken to the suspect who was "just blowing off steam."

Now she wonders if more should have been done.

"Somebody let this slide," she said. "And this guy's been walking around town thinking he got away with it."

CBC News has reviewed an image of the threatening message, which Heslop refused to approve for posting in the forum. It used racially charged language and made reference to recent land protests by Six Nations members in Caledonia, near Hamilton, Ont. The threat targeted only the Indigenous Lives Matters signs and warned that they would be burned — details that weren't made public prior to Thursday's arrest.

"If they think there [sic] lives matter so much, then they wouldn't be breaking laws and stopping us (as in all races) from using our roads," it reads in part.

The suspect has been released and charged with mischief and uttering threats, according to police.

There is no hate crime in the Criminal Code. Police departments vary in how they determine whether a crime is identified as hate-motivated, and the consideration only comes into play during sentencing. 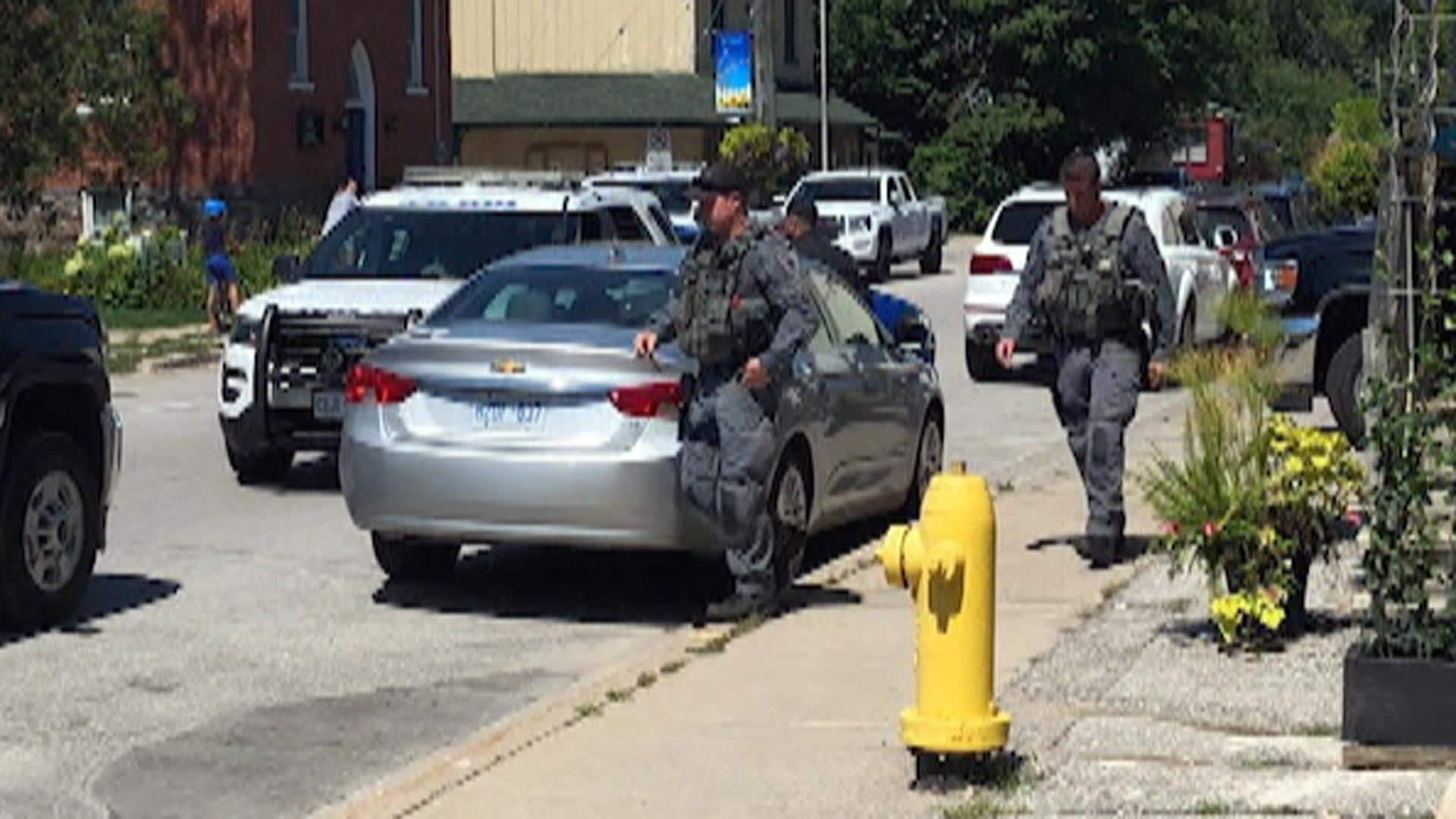 2 months ago
0:20
The Emergency Response Team of York Regional Police closed Main Street in Schomberg, Ont., to make an arrest after signs saying 'Indigenous Lives Matter' were stolen and burned. 0:20

'It is a hateful statement'

Greg Locke, a Main St. resident, was among the first to notice the missing signs, when he went outside to retrieve his paper early Thursday morning. A little later, he took his border collie Flynn for a walk at the nearby village fairgrounds and found the charred remains of several of the red-and-white plastic signs on a pathway. The fire had been hot enough to melt the asphalt.

"It is a hateful statement," said Locke, who has lived in Schomberg for 14 years. The vandalism stirred outrage in the community, he said. "We're offended. We're offended that we would have somebody who would think that of our native, Indigenous groups."

The lawn signs were the brainchild of his neighbours, Alicia Turner and Michelle Hubert, an American couple who moved to Schomberg in 2010.

They were moved by the worldwide Black Lives Matter protests, said Turner, but figured that staging their own small demonstration in a tiny village wouldn't have much of an impact. So instead, they contracted another neighbour to print up the messages of solidarity, paying the costs out of their own pockets.

"When you see a Pride sign, or a Pride flag you feel like this is a safe place to be," Turner explained. "And I wanted to be really visible and present. An ongoing sign that this was a safe place for Indigenous people and for Black people, and for people of colour generally."

Like the rest of Canada, Schomberg is becoming more diverse, but the village remains overwhelmingly white. According to 2016 Census data, only 120 people counted themselves as visible minorities, with most being Latin American, Asian or South Asian. There were no Black residents at the time, but 40 people reported they were of Aboriginal identity — 25 from First Nations, and 15 Métis.

Initially, the couple printed up just 15 signs, for themselves and a couple of friends, with some extras in case of vandalism. But demand was brisk, and in the end they went back to the printer twice more, with the orders totalling more than 200. Many were handed out from their front porch on Canada Day.

The last of the signs were used to replace the stolen and burned ones on Wednesday. Now Turner and Hubert intend to make a much larger order.

"People really want more signs. They've been very positive," said Turner. "That's definitely the kind of close knit community we are, and we want to be."

On Thursday afternoon, the community Facebook page was filled with messages of celebration and support as news of the arrest spread. "Not in our town!," proclaimed one, "Good riddance," said another.

With files from Madeline McNair and Diana Swain