Democrats appeared to have fallen short in their bid to secure the votes needed to call witnesses in President Trump's impeachment trial, clearing the way for Trump's likely acquittal as early as this weekend.

Key senator says no to witnesses

Democrats appeared to have fallen short on Thursday in their bid to secure the votes needed to call witnesses in President Trump's impeachment trial, clearing the way for Trump's likely acquittal as early as this weekend.

Democrats had urged a handful of Republicans to support their effort to call witnesses, but their hopes appeared dashed when Republican Sen. Lamar Alexander, who had been undecided, declared further evidence in the case was unnecessary.

"There is no need for more evidence to prove something that has already been proven and that does not meet the United States Constitution's high bar for an impeachable offence," Alexander said in a statement after the evening session had concluded.

Barring an unforeseen change of heart by another Republican senator, it appeared Alexander's decision would bring an end to Trump's two-week trial and provide him with the swift decision he had sought.

Earlier, Republican Sen. Susan Collins broke with her party and announced her support for witnesses. But Democrats needed at least of three of her colleagues to defect and give them the 51 votes needed to call witnesses and prolong the trial.

Two-thirds of the Senate is required to remove Trump from office. He is unlikely to be convicted.

Democrats had hoped to hear from former National Security Adviser John Bolton after a report — which he has not denied — that he planned to say in an upcoming book that Trump told him he wanted to freeze $391 million in U.S. military aid for Ukraine until it investigated Democratic presidential contender Joe Biden and his son Hunter, who worked for a Ukrainian energy firm while his father was vice president.

The Democratic-controlled House of Representatives impeached Trump in December, formally accusing him of abusing his power for pressuring Ukraine to investigate the Bidens. The House also charged Trump with obstruction of Congress.

Trump's acquittal would allow him to claim vindication just as the Democratic Party holds its first nominating contest for the Nov. 3 election in Iowa on Monday.

Trump held a rally in Des Moines, Iowa, on Thursday night and slammed the trial, calling it an effort by Democrats to overthrow his 2016 election victory.

"They want to nullify your ballots, poison our democracy and overthrow the entire system of government," Trump said.

Earlier Thursday, the whistleblower issue again boiled to the surface when U.S. Chief Justice John Roberts, who is presiding over the trial, refused to read a question from Republican Sen. Rand Paul that included the name of a person that right-wing media has accused of being the whistleblower.

Paul is one of several Republicans, including Trump, who have posted social media links to some of those news articles.

"The presiding officer declines to read the question as submitted," Roberts said. He had rejected a similar question the day before.

Paul said his question, which asked whether that person worked with a member of Democratic Rep. Adam Schiff's staff to impeach Trump, was not meant to unmask the whistleblower.

"My question's not about the whistleblower. My question's about two people who are friends," he told reporters.

"This question was really framed and intended to expose the identity of the whistleblower and subject that whistleblower to retaliation," Democratic Sen. Richard Blumenthal told reporters.

Bradley P. Moss, a lawyer whose firm represents the whistleblower, called the Republican effort "a stain on the legacy of this constitutional republic." 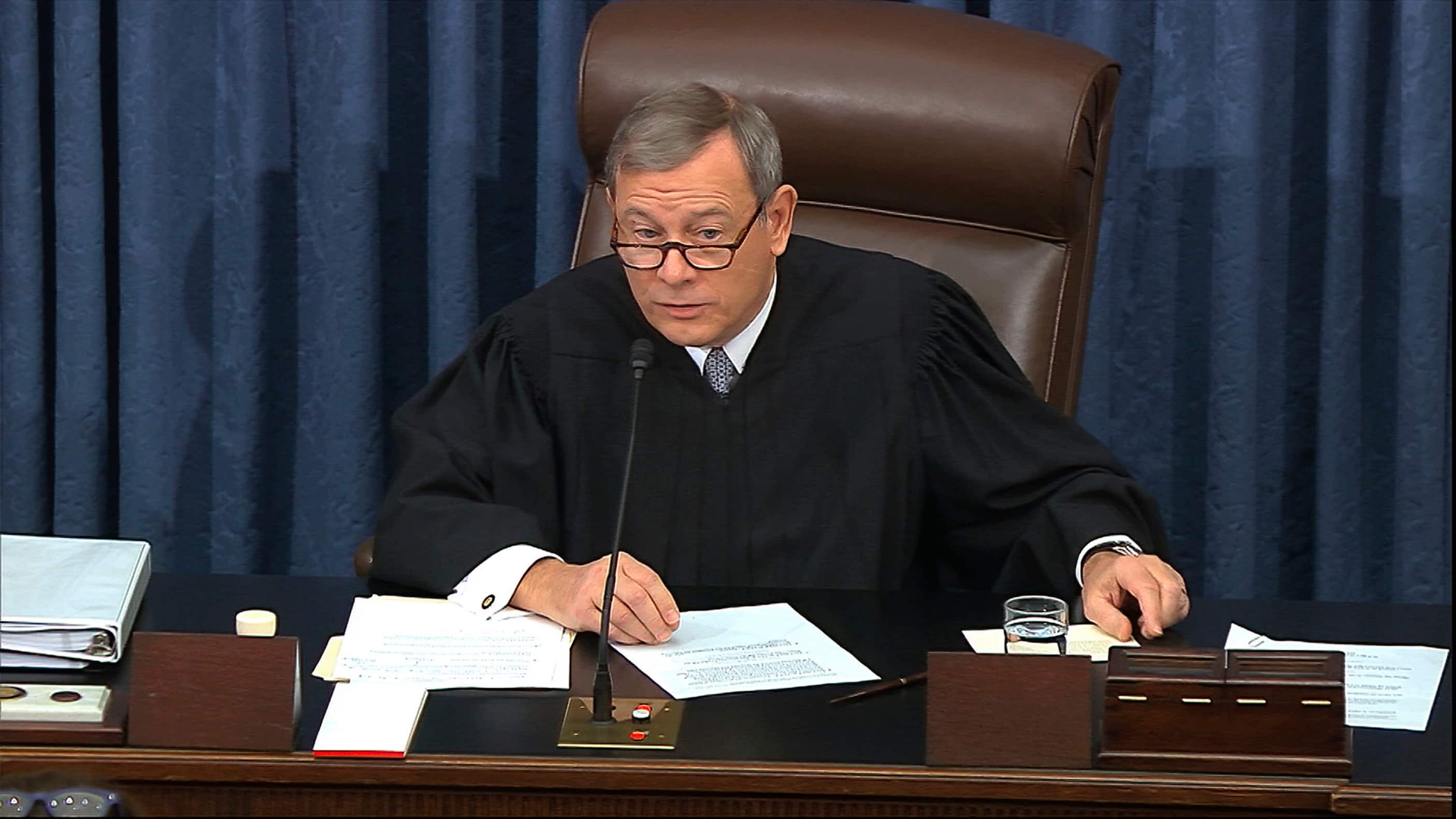 10 months agoVideo
0:16
Chief Justice John Roberts declines to read a senator's question for the second day in a row. Sen. Rand Paul expressed frustration Wednesday that Roberts would not read a question that contained the whistleblower's name. 0:16

On Friday, each side is expected to present closing arguments before the Senate moves to the question of whether to call witnesses.

If the vote on whether to allow witnesses is 50-50, Roberts could step in to break the tie. But there is so little precedent for impeachment trials — this is only the third of a president in U.S. history — that Senate aides said there was no way to know exactly what would occur.

If Roberts declines to break a tie, the vote deadlock would mean a defeat for Democrats.

During the question period Thursday, Schiff, the lead Democratic prosecutor in the trial,proposed both sides conduct closed-door witness depositions for a week while the Senate returns to normal business.

But there was no sign his plea was being considered by Republicans.

'One of the most bizarre things'

As senators questioned both the Trump legal team and the Democratic managers of the trial yesterday, Trump lawyer Alan Dershowitz offered an expansive defence of presidential power that provoked astonishment among Democrats.

"If a president does something which he believes will help him get elected in the public interest, that cannot be the kind of quid pro quo that results in an impeachment," Dershowitz said, referring to the charge that Trump abused his power by using congressionally-approved security aid as leverage to get Ukraine to smear Biden.

Democratic Sen. Mazie Hirono told reporters: "That was one of the most bizarre things I've ever heard as a response."

On the same subject, House manager Jerrold Nadler told the Senate on Thursday that the idea of weighing a corrupt motive against a fine motive is "nonsense."

On Thursday, Dershowitz said his headline-dominating argument against impeaching the president was "distorted."

My question today is about whether or not individuals who were holdovers from the Obama National Security Council and Democrat partisans conspired with Schiff staffers to plot impeaching the President before there were formal House impeachment proceedings.

In a day-after tweet, the former Harvard Law professor complained about the portrayal of his testimony at Trump's impeachment trial.

"They characterized my argument as if I had said that if a president believes that his re-election was in the national interest, he can do anything," Dershowitz  said. "I said nothing like that, as anyone who actually heard what I said can attest."

House manager Hakeem Jeffries addressed the issue during Thursday's proceedings following a question from a Democratic senator. He told the Senate that a president "corrupting the integrity of our democracy and our free and fair elections" was exactly what the framers of the U.S. Constitution were concerned about. 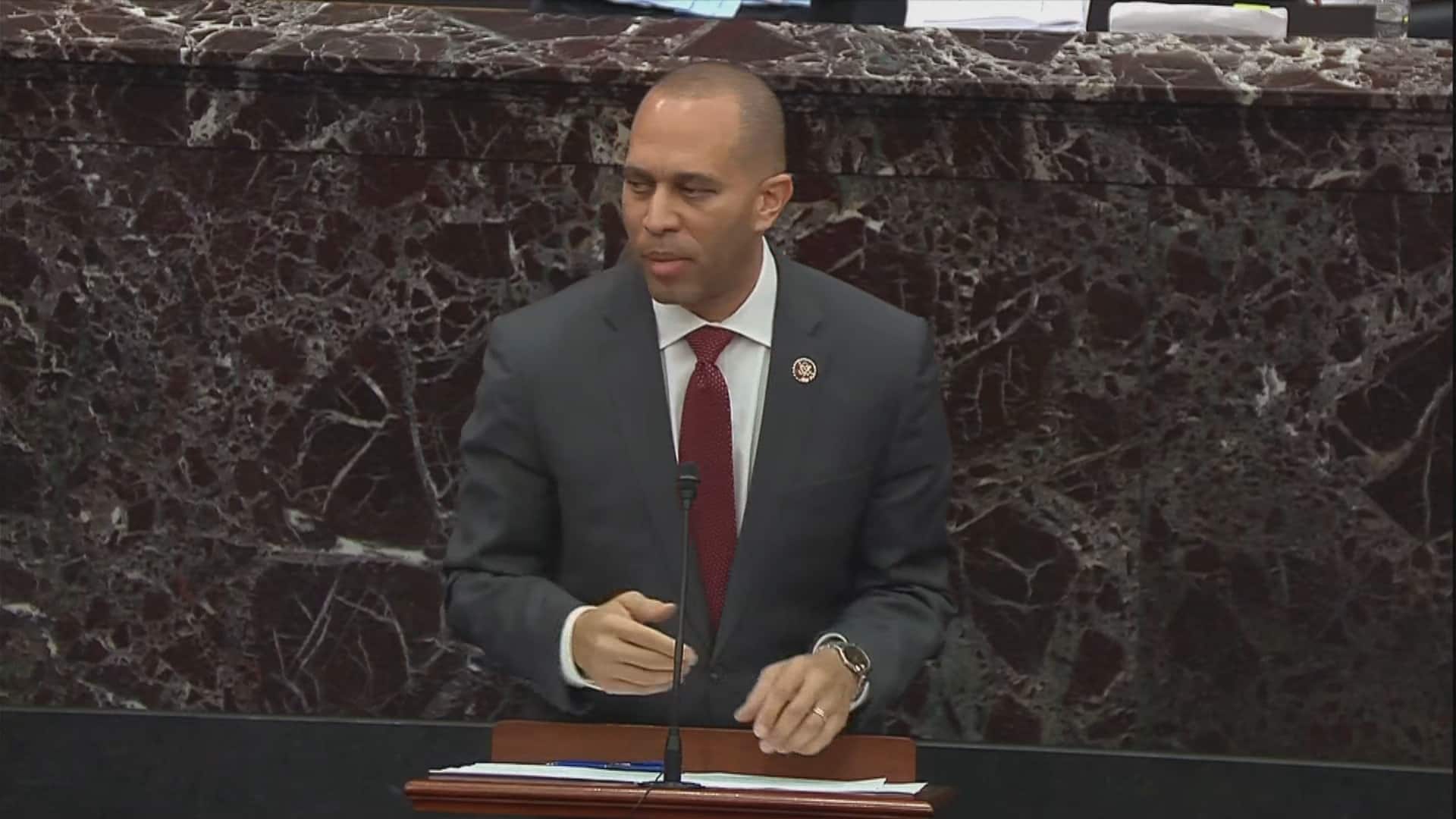 10 months agoVideo
1:58
House manager Hakeem Jeffries rejects the opinion that any foreign interference in an American election is okay. 1:58

Possible testimony from  Bolton is of particular interest after a report — which he has not denied — that he planned to say in an upcoming book that Trump told him he wanted to freeze $391 million US in military aid for Ukraine until it investigated Biden and his son.

Nadler, the head of the House judiciary committee, said it might be a good idea for the House to subpoena Bolton, media reported.

"If tomorrow's vote fails, they will not permit him or anyone else to testify. I expect he'll talk publicly, and we will see," Nadler told reporters, according to those present.

Democrats were not conceding defeat, however.