Environment Canada says a massive system is slowly drenching much of Ontario, the Maritimes and Quebec. Record precipitation levels — with double to triple the seasonal norms for rainfall — have threatened to trigger widespread flooding in those areas.

Eastern Ontario, parts of Quebec and most of New Brunswick all under rainfall warnings 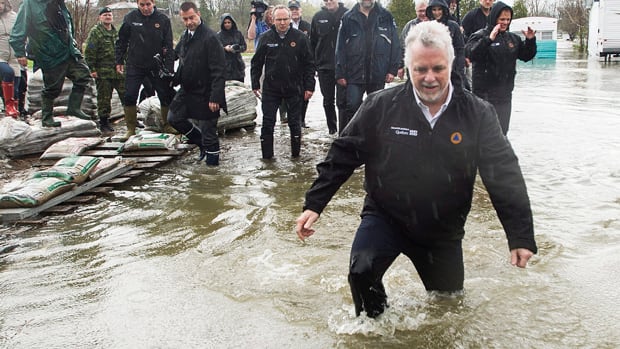 Quebec calls in the military to fight rising floodwaters

3 years ago
2:08
More than 350 Canadian Forces soldiers are on the move in Quebec assisting with flood relief efforts, CBC's Salimah Shivji reports 2:08

Unrelenting rain is worsening a flood crisis in Central Canada that has already forced Quebec to call in military aid.

The Quebec government says the Canadian Forces have been enlisted to help battle the floodwaters in that province, where the storm has been most severe.

The troops are headed to Gatineau, Laval, Rigaud and the Mauricie region of Quebec. Another unit will be set up as a command post in Montreal. In total, between 350 and 400 military personnel have been deployed.

More than 120 Quebec communities have been hit by flooding and 857 people have been asked to leave their homes, according to Quebec authorities. More than 1,500 homes are flooded and 340 roads have been affected.

Environment Canada says a massive system is slowly drenching much of Ontario, Quebec and the Maritimes. Record precipitation levels have threatened to trigger widespread flooding in those areas.

Rainfall advisories were lifted for the large urban areas of Montreal and Toronto early Saturday, but are still in place in eastern Ontario (including Kingston and Ottawa), parts of Quebec and most of New Brunswick.

A special weather statement says much of Nova Scotia could see close to 50 millimetres of rain.

In Montreal, a rehabilitation centre and a 76-unit condo have both been evacuated due to the swelling Rivière des Prairies.

Residents of the rehab centre have been taken to other health-care centres, where they'll stay for the next three weeks.

Île Mercier, an island of some 50 properties in Montreal, is completely underwater and has been under an evacuation order since Wednesday.

Montreal Mayor Denis Coderre says the city may have to consider forcibly removing the 20 or so householders who have refused to leave, even as the only bridge connecting it to the rest of the city was shut down.

In Gatineau, Que., near Ottawa, around 400 people have been forced out of more than 200 homes as the Ottawa River rises.

Homeowner Jonathan Brennan told CBC News he'd been working since Monday to prevent his property from being flooded.

"Right now, I had to make a decision between pumping outside of my wall that I made or just take care of my basement," he said. "Because people didn't have a chance to prepare, there is old people around, there are abandoned houses ... If we had help from the army earlier, probably I wouldn't be like this right now.

"It's not that I failed, but I tried so hard. I don't know what to do anymore." 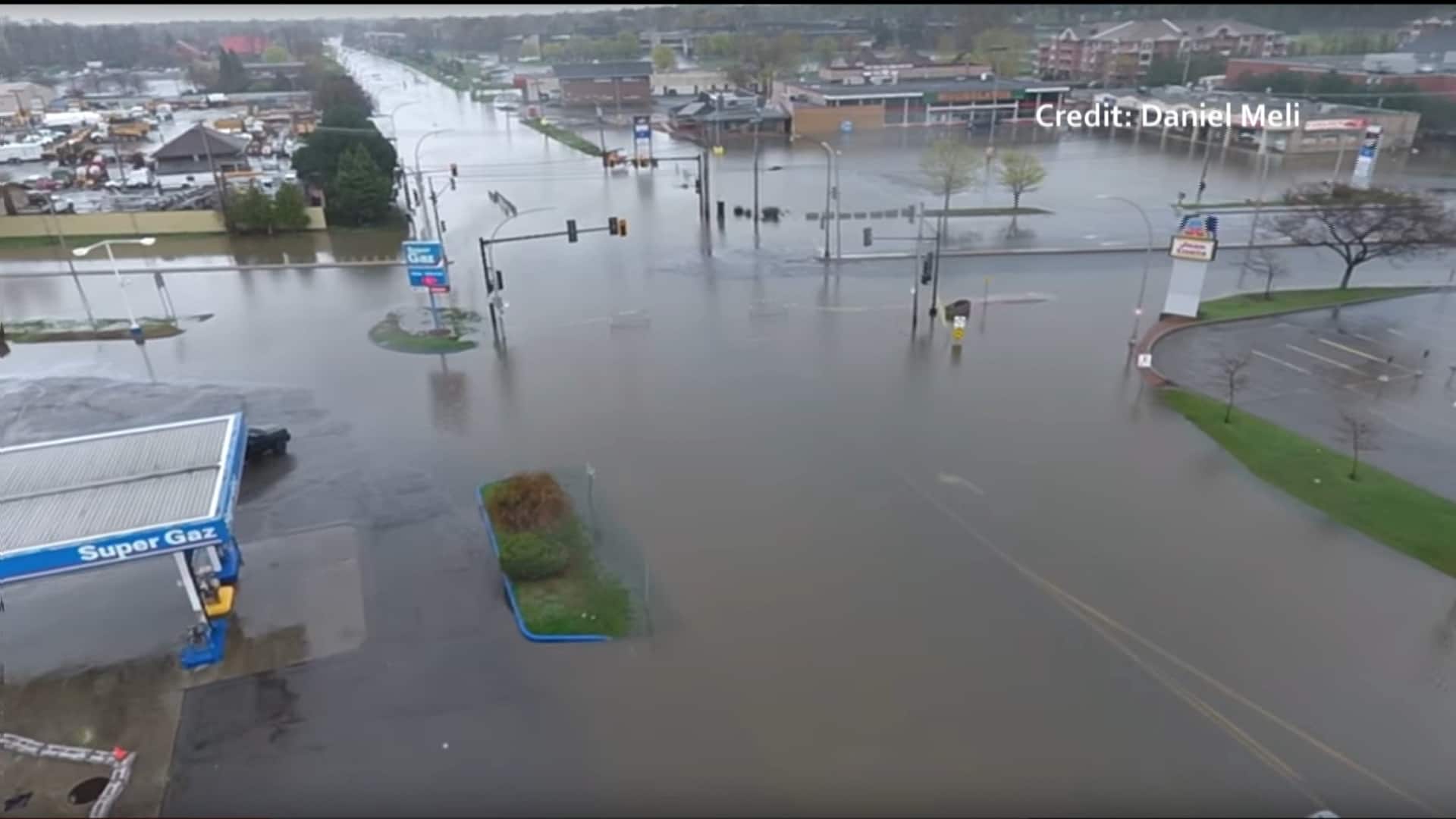 Flooding in Pierrefonds seen from above

3 years ago
0:54
This is what Pierrefonds looks like from above as flooding continues to plague some parts of Quebec. Submitted by Daniel Meli. 0:54

On the other side of the river, the Ontario community of Clarence-Rockland declared a state of emergency in anticipation of continuing heavy rain.

Electricity was cut off on one road where a house was floating away, tethered only by power lines, the mayor said.

There have also been states of emergency declared in Gracefield, Pontiac and Oka.

Quebec's Environment Minister, David Heurtel, said on Friday that the rain forecast is "beyond the worst scenarios that have occurred in the last 55 years."

Prime Minister Justin Trudeau promised the federal government was ready to do whatever it can to help people deal with the flooding and its cleanup.

A month's worth of rain

In New Brunswick, emergency officials are concerned about water levels and keeping a close eye on rivers and streams, including the St. John River.

In the southwestern part of the province, residents were warned that nearly a month's worth of rain was expected to fall in 24 hours.

CBC meteorologist Kalin Mitchell said the the rain would continue overnight Saturday and into Sunday morning. Some areas had already seen 50 mm by midday Saturday.

In their lakeshore home in Stoney Creek, Ont. on Friday, LeeAnn Lemay and Toni Burke peered out through the back window as the waves from Lake Ontario crashed over the retaining wall onto their small backyard.

Heavy rain has fuelled the high lake levels, sparking concerns about flooding and damage among some southern Ontario homeowners whose houses hug the shoreline of the lake.

"I've never seen the lake come this close to the house," said Burke, who has lived in the area, located just outside of Hamilton, for over 40 years. "I have seen storms like this, but the lake wasn't so high.

"The water goes directly right across the street. So both sides of the street get it, it's not just the lakefront."

Next door to Lemay and Burke, the house built much closer to the shore took the full brunt of the waves, as the overflow from Lake Ontario crept into the front yard, flooding the whole area.

Lake Ontario's water levels are the highest they've been since 1993.

Bill Chornomaz, who works out of a home on the same street as Burke and Lemay, said water has already begun to leak inside.

"People are going to be experiencing flooding, no doubt," he said. "There will be basement flooding for sure."

When it comes to flooding, it would seem that many Canadians are unprepared. The University of Waterloo surveyed 2,300 homeowners who live in areas designated as high-risk flood areas. But nearly all (94 per cent) were unaware of that risk.

The study also found that those surveyed did not know recent government policy changes put the onus on homeowners to insure their homes specifically for flooding.

"Canadians pay $600 million out of pocket for flood damage every year," Jason Thistlethwaite, an assistant professor at the School of Environment, Enterprise and Development at the University of Waterloo, said in a statement.

"With disaster-assistance costs expected to double over the next five years, homeowners can't afford to remain in the dark about their options and responsibilities." 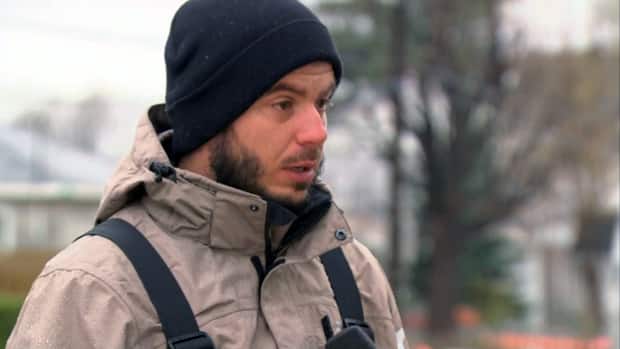 'I tried so hard': Emotional Gatineau man on fight against floodwaters

3 years ago
3:06
CBC's Amanda Pfeffer speaks with a resident of Gatineau, Que., who has been trying to protect his home from floodwaters since Monday 3:06

With files from CBC's Mark Gollom and The Canadian Press