Britain's Prince Harry has arrived in Canada to begin a new life with his wife Meghan and son Archie after sparking a crisis in the Windsor family by unexpectedly announcing earlier this month that they would be stepping down from royal duties.

Britain's Prince Harry has arrived in Canada to begin a new life with his wife Meghan and son Archie after sparking a crisis in the Windsor family by unexpectedly announcing earlier this month that they would be stepping down from royal duties.

Harry was shown arriving on Vancouver Island via WestJet by Sky News, just days after striking a deal with Queen Elizabeth and senior royals that will see him and his wife Meghan exit official roles to seek an independent future.

Buckingham Palace and the Queen said on Saturday that Harry and Meghan would no longer be working members of Britain's monarchy, no longer use their "Royal Highness" titles and would now pay their own way in life, freeing them to forge new careers in North America. 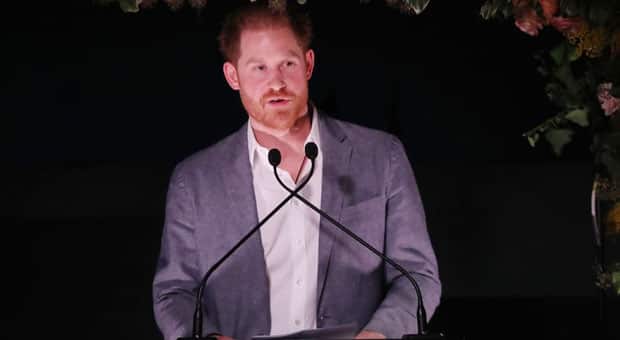 1 year ago
1:33
Prince Harry addressed the myriad emotions he and his wife, Meghan, are feeling after agreeing with Queen Elizabeth that the couple would step down from official roles. 1:33

The Duke and Duchess of Sussex, as they are formally known, spent six weeks in Canada at the end of last year before returning to Britain. Their first official engagement of 2020 was to visit Canada House to thank consular staff for what they said had been an "unbelievable" welcome.

The duchess has been staying on B.C.'s West Coast with her son, after briefly returning to the U.K. earlier this month following an extended six-week Christmas break on Vancouver Island with Prince Harry.

For more coverage of Harry and Meghan, subscribe to the Royal Fascinator, our biweekly newsletter dedicated to news and analysis of the goings-on at Buckingham Palace, Windsor Castle and beyond — in your inbox every other Friday.