Canada must do more to help persecuted Yazidis, MPs told

Canada must do more to help desperate Yazidi survivors of genocide and cannot rely on a "flawed" refugee identification system led by the United Nations, advocates tell MPs in Ottawa on the second day of three days of hearings on immigration policy.

Canada must do more to help desperate Yazidi survivors of genocide and cannot rely on a "flawed" refugee identification system led by the United Nations, advocates told MPs today in Ottawa.

The House of Commons immigration committee heard horrific accounts of torture, rape, murder and enslavement as witnesses offered emotional testimony about atrocities carried out by the Islamic State of Iraq and Syria (ISIS).

After a warning that testimony may be "upsetting" to members of the committee and viewing public, MPs heard shocking stories of mass killings, children raped by multiple men several times a day, and mothers being forced to feed on the flesh of their own children.

Nadia Murad Basee Taha, who was abducted and held by ISIS for three months, said the world has remained "negligent" and "silent" as ISIS continues to rape, torture, kill and enslave Yazidis in a quest to exterminate the targeted population. 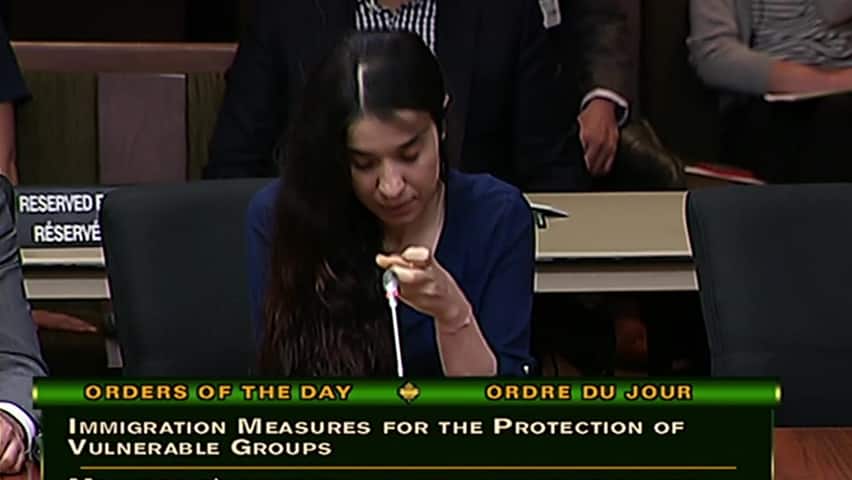 She broke down in tears recounting the Sinjar massacre, witht 4,000 people killed, 6,000 taken hostage and another 4,000 forced to flee to the mountains.

"We knew our destiny was for the men to be killed and the women and children to be held hostages," she said.

Tara urged Canada and the international community to do more to help the Yazidi people, including bringing in more refugees and providing more humanitarian and medical assistance for those in camps.

"We only want to live peacefully — that's all we want," she told MPs.

But Conservative immigration critic Michelle Rempel insisted the Conservative government had specifically asked that ethnic and religious minorities be given priority in identification lists, and urged the UN to do more to flag and fast track Yazidizs in the process.

In a news conference on Parliament Hill before the hearing, she urged the government to "lean on" the United Nations to prioritize Yazidis and other persecuted religious minorities in resettling refugees.

Rempel became emotional recalling the "horrors" of stories she has heard from persecuted members of the ancient religious faith targeted by ISIS, and urged the Liberals not to let "political correctness" guide Canada's refugee policy.

"These people are being wiped off the face of the Earth," she said.

During the committee hearings, witnesses agreed the UN process was not working to protect the Yazidi people.

"It's flawed, it's unfair and it's unacceptable," said Murad Ismael, executive director of the advocacy group Yazda, noting that some waiting for asylum have been told they must wait until 2022.

He called for Canada to impose a quota of 5,000 to 10,000 Yazidi refugees, targeting the most vulnerable survivors of the genocide.

In June, a United Nations report said militants from the Islamic State in Iraq and Syria (ISIS), an al-Qaeda splinter group fighting in the Middle East to establish an Islamist state, were seeking to destroy the ancient religious community of 400,000 people through killings, sexual slavery and other crimes.

The report said the militants had been systematically rounding up Yazidis since August 2014, seeking to "erase their identity," a finding that meets the definition of genocide under the 1948 UN Convention on Genocide.

Ismael urged Parliament to reintroduce a failed resolution to declare the atrocities as genocide.