Canadian woman will be on next series of bank notes, Trudeau announces

The image of an iconic Canadian woman will appear on the next issue of bank notes, Prime Minister Trudeau announced today.

The image of an iconic Canadian woman will appear on the next issue of bank notes, Prime Minister Trudeau announced today.

"A Canadian woman will be featured on the very first of the next series of bills expected in 2018," Trudeau said.

"Today, on International Women's Day, the Bank of Canada is taking the first step by launching public consultations to select an iconic Canadian woman to be featured on this new bill."

The government and the Bank of Canada did not indicate which denomination would showcase the iconic female Canadian.

Finance Minister Bill Morneau, who stood alongside the prime minister with other members of the Liberal caucus and former Mississauga, Ont., mayor Hazel McCallion during the announcement, noted that it is "high time to change."

"One of the very first things I had the honour of doing as the new finance minister was asking the governor of the Bank of Canada, Stephen Poloz, and his colleagues at the bank whether it's in fact possible to put a woman on the bank note," said Morneau.

The finance minister said he was told the central bank had been looking into the possibility for some time and was keen to support the initiative. 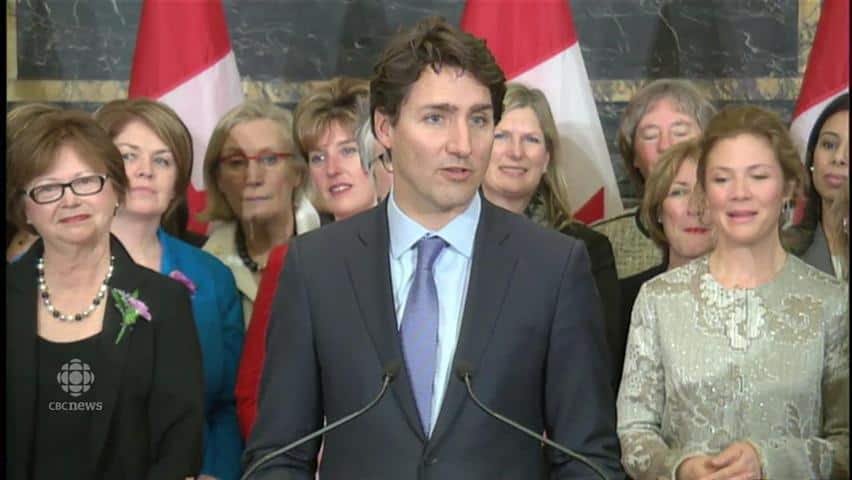 Trudeau announces search for woman to be on bank note

5 years ago
2:07
The prime minister announces the Bank of Canada is taking nominations for an "iconic Canadian woman" to appear on a banknote in 2018. 2:07

From now until April 15, Canadians can visit the Bank of Canada's website to submit nominations for the woman they think should appear on the bill.

The nominees can be any Canadian woman, either by birth or naturalization, who has demonstrated outstanding leadership, achievement or distinction in any field, said a release from the central bank.

The nominees cannot be a fictional character and must have died prior to April 15, 1991.

Once the nomination period is over, an independent advisory council made up of academics and cultural leaders will review the submissions and present a short list to Morneau for his consideration.

The news was welcomed by Victoria-based Merna Forster, a historian who has been leading a long-running campaign to get a woman on Canadian bank notes.

"Wow! I'm thrilled that we'll finally see a Canadian woman on the face of our bank notes," Forster said in an email to CBC News. "Long overdue. This is an important step, and I hope we can look forward to gender equality on Canadian notes as in Sweden and Australia."

Forster said she'd like to thank the more than 73,000 people who supported her long campaign as well as the Bank of Canada, Trudeau and Morneau for what she described as "a memorable International Women's Day. Fantastic!"

B.C. MP Sheila Malcolmson, the NDP's critic for Status of Women, said her party has been fighting to make Canadian currency reflective of the country's diversity for years, and added that representation on bank notes is not the only issue that requires redress.

"It would be great to see a woman on a hundred dollar bill but it'd be even better if women didn't only make $72 for every $100 men make for work of equal value. That's why it's time to close the wage gap," Malcolmson said in an email.

Once people have visited the central bank's nomination website and submitted their nomination, the bank is encouraging them to tweet out their choice using the hashtag #bankNOTEable.