Jody Wilson-Raybould says she faced intense political pressure and veiled threats related to the SNC-Lavalin affair, and was warned directly by Prime Minister Justin Trudeau of the negative consequences if the Quebec-based company faced prosecution.

Jody Wilson-Raybould says she faced intense political pressure and veiled threats related to the SNC-Lavalin affair, and was warned directly by Prime Minister Justin Trudeau about the negative consequences if the company faced prosecution.

It was a day of high political drama, as the former justice minister and attorney general accused top Liberal government officials of inappropriate, excessive political interference in an independent criminal prosecution, and the opposition parties called for Trudeau's resignation and a public inquiry into the scandal.

Testifying at the Commons justice committee Wednesday, Wilson-Raybould said she was contacted by 11 officials in the Prime Minister's Office, the Privy Council Office and Finance Minister Bill Morneau's office while she was justice minister and attorney general about the Quebec-based engineering and construction company. SNC-Lavalin was facing corruption charges for contracts in Libya and was lobbying for a remediation agreement as an alternative to criminal prosecution.

"For a period of four months from September to December 2018, I experienced a consistent and sustained effort by many people within the government to seek to politically interfere in the exercise of prosecutorial discretion in my role as the attorney general of Canada in an inappropriate effort to secure a Deferred Prosecution Agreement (DPA) with SNC-Lavalin."

Wilson-Raybould said she was "hounded" by various officials through phone calls, meetings and text messages.

"Within these conversations there were express statements regarding the necessity of interfering in the SNC-Lavalin matter, the potential of consequences, and veiled threats if a DPA was not made available to SNC-Lavalin," she said. 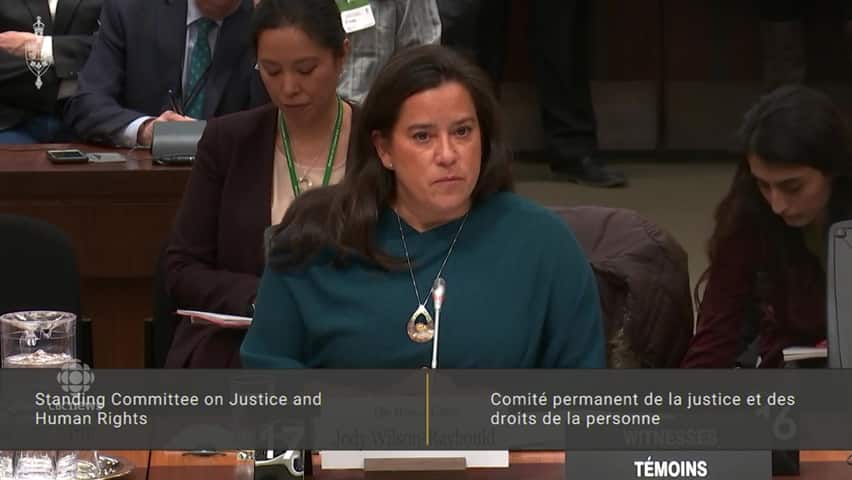 The corporation faced a 10-year ban on bidding on government contracts if convicted of the criminal charges of bribery.

Wilson-Raybould chronicled a series of meetings, including one with Trudeau and Privy Council clerk Michael Wernick on Sept. 17, 2018. She told him that she had made a decision not to overturn the decision from the director of the Public Prosecution Service Kathleen Roussel to proceed with criminal prosecution against SNC-Lavalin.

The prime minister cited potential job losses and the possible move by the company, and asked her to "help out." The clerk then made the case for a DPA and reminded her that there was an election coming in Quebec.

"At that point, the prime minister jumped in, stressing that there is an election in Quebec, and that 'I am an MP in Quebec, the MP for Papineau,'" she recounted. 'I was quite taken aback."

At that point, Wilson-Raybould said, she posed a direct question to Trudeau while looking him straight in the eye, asking if he was politically interfering with her role and her decision as the attorney general.

"I would strongly advise against it," she told the committee she warned Trudeau, who responded, "No, no, no, we just need to find a solution." 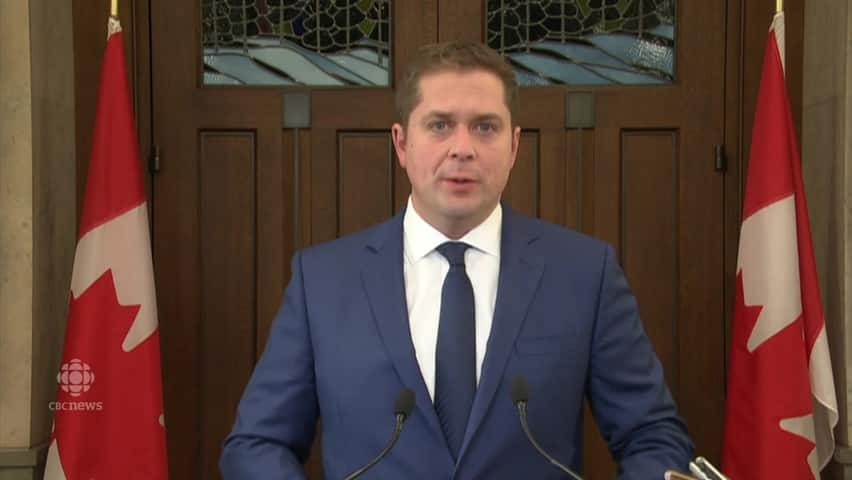 Conservative Leader Andrew Scheer said the RCMP must open an investigation, and he called on Trudeau to resign as prime minister for his role in undermining the administration of justice and trying to overturn an independent decision by the attorney general. He said the prime minister has lost his moral authority to govern.

"I was sickened and appalled by [Wilson-Raybould's] story of inappropriate and, frankly, borderline illegal pressure brought to bear on her by the highest levels of Justin Trudeau's government," he said.

Trudeau refuted Wilson-Raybould's account and dismissed the call for him to step down.

"I strongly maintain, as I have from the beginning, that I and my staff always acted appropriately and professionally," he said during an event in Montreal late Wednesday. "And therefore I completely disagree with the characterization of the former attorney general about these events."

Still in caucus — for now

Trudeau said it's premature to determine Wilson-Raybould's status in the Liberal caucus.

"I haven't yet had the opportunity to review her entire testimony. I will do that before making any further decision," he said.

NDP Leader Jagmeet Singh said Trudeau may well have to resign, but right now he's pressing to get to the bottom of the scandal.

"At this point, Canadians demand some answers that they have, and the only way to get to the bottom of this is a public inquiry that would have the independence to assess the truth," he said.

Wilson-Raybould, who is still in the Liberal caucus, testified for nearly four hours as the key witness for the Commons justice committee in a packed room on Parliament Hill. In an unusual reversal of roles, opposition Conservative and NDP MPs praised the Liberal MP for speaking truthfully and having the courage to speak out while she was asked pointed and at times uncomfortable questions from her fellow Liberal MPs. 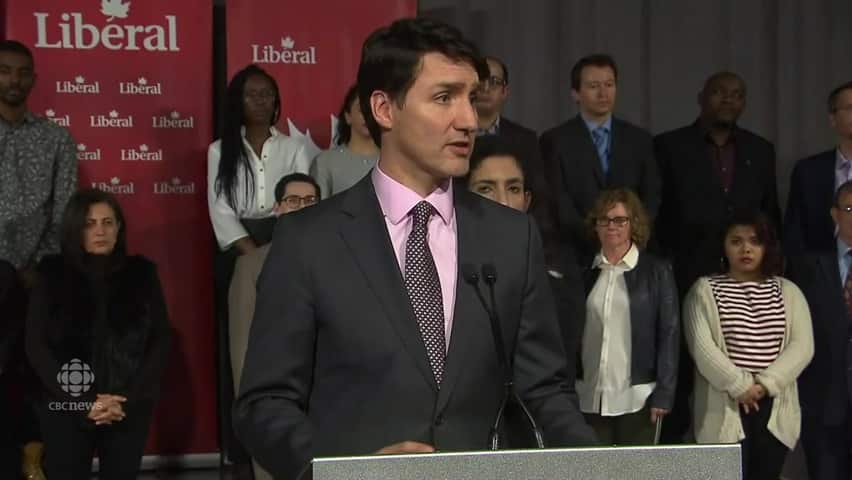 Wilson-Raybould recounted an Oct. 26, 2018, conversation between her chief of staff Jessica Prince and PMO adviser Mathieu Bouchard, who was still pressing the option of an alternative to prosecution for SNC-Lavalin and suggesting an external legal opinion.

She told the committee that Prince told Bouchard this would be perceived as interference and the attorney general questioning Roussel's decision.

"Mathieu said that if — six months from the election — SNC announces they are moving their headquarters out of Canada, that is bad. He said, 'We can have the best policy in the world, but we need to be re-elected,'" Wilson-Raybould testified.

On Dec. 5, 2018, she met with Gerry Butts, the prime minister's then-principal secretary, to discuss issues including SNC-Lavalin and the "barrage" of people hounding her and her staff.

'We need a solution'

"Towards the end of the meeting I raised how I needed everyone to stop talking to me about SNC as I had made up my mind and the engagements were inappropriate. Gerry then took over the conversation and said how we need a solution on the SNC stuff — he said I needed to find a solution," she said.

Wilson-Raybould said the pressure escalated later that month with contacts from PMO officials. Butts and Trudeau's chief of staff Katie Telford "summoned" Prince to a Dec. 18 meeting, saying the situation was getting worse and that they felt she wasn't doing anything about it.

According to Wilson-Raybould's testimony, Telford suggested they could line up people to write op-eds to say what she was doing was "proper."

The next day, Wilson-Raybould met with Wernick. She said the clerk conveyed that the prime minister was "quite determined, quite firm," and wanted to know why the DPA route wasn't being pursued.

"He said, 'I think he is gonna find a way to get it done one way or another. So he is in that kinda mood and I wanted you to be aware of that,'" Wilson-Raybould testified.

Wernick testified last week that he warned Wilson-Raybould about the economic "consequences" of prosecuting SNC-Lavalin, including heavy job losses, but insisted there was never any "inappropriate pressure" put on her to override the prosecution service's decision. The clerk also told her that the prime minister and others in the government were "anxious" about the impact of prosecution.

Repeatedly asked by Liberal MPs why she would have remained in cabinet when she felt inappropriate pressure, Wilson-Raybould explained that she took the prime minister at his word, retained confidence in him, and decided to stay at the cabinet table as veterans affairs minister after the shuffle Jan. 14.

She said she had "serious concerns" that the government would enter into a DPA if she were no longer attorney general, and said she would have quit if that happened.

Wilson-Raybould offered few details on why she ultimately left.

"I resigned from cabinet because I did not have confidence to sit around the cabinet table, that's why I resigned," she said.

She declined to explain why she quit cabinet or disclose details of her conversations with the prime minister prior to her resignation. But she described experiencing "heightened anxiety" as she waited for the "other shoe to drop."

A week before the cabinet shuffle, she said she received a call from Trudeau advising her she was being moved from the justice portfolio.

"I will not go into details of this call, or subsequent communications about the shuffle, but I will say that I stated I believed the reason was because of the SNC matter. They denied this to be the case."

Asked if she still has confidence in the prime minister, Wilson-Raybould said the question was not relevant to the hearings. 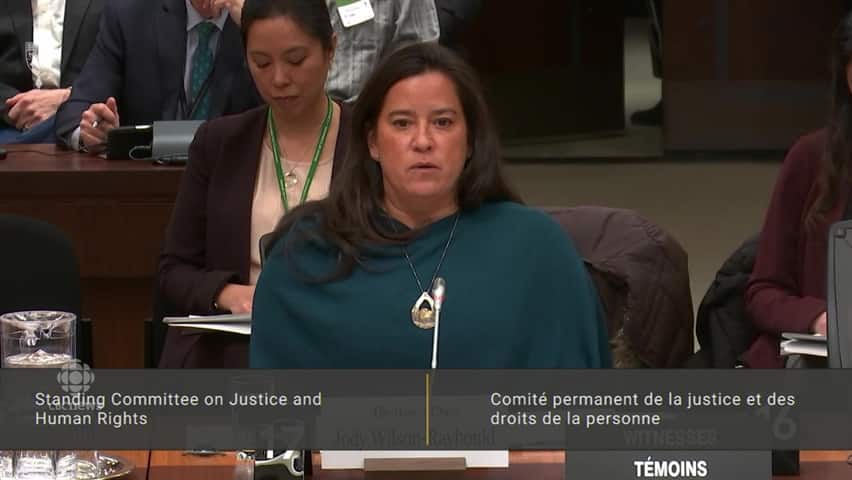 2 years ago
1:15
"Are you politically interfering with my role as the attorney general," Wilson-Raybould says she asked Trudeau. "I would strongly advise against it." 1:15

NDP MP Nathan Cullen asked if it is illegal to exert pressure on an attorney general to offer a "special plea" to a company for political reasons.

"In my opinion, it's not illegal. It is very inappropriate depending on the context of the comments made, the nature of the pressure, the specific issues that are raised," she said. "It is incredibly inappropriate and is an attempt to compromise, or to impose upon an independent attorney general." 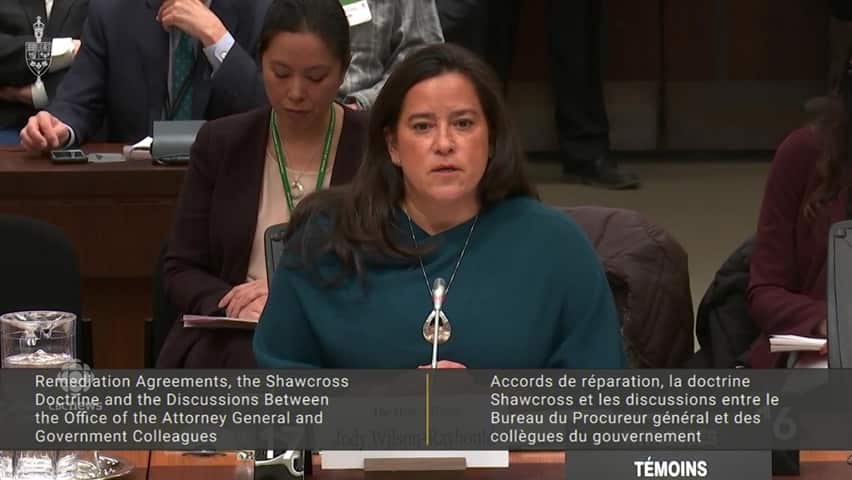 Wilson-Raybould on 'what is not appropriate'

2 years ago
1:10
“What is not appropriate is pressing the attorney general on matters that she or he cannot take into account such as partisan political considerations …” 1:10

Earlier Wednesday, Prime Minister Justin Trudeau insisted that Wilson-Raybould could "speak fully" about the SNC-Lavalin affair, contrary to the claim by Wilson-Raybould that she was constrained despite a confidentiality waiver from the Liberal government.

Wilson-Raybould wrote to the committee chair, Liberal MP Anthony Housefather, late Tuesday to say the parameters outlined in Monday's waiver would not allow her to speak freely on issues related to her resignation from cabinet or her time as veterans affairs minister.