When Prime Minister Justin Trudeau's former principal secretary appeared before the Justice committee today, he had a great deal more to say about his boss's reasons for shuffling Jody Wilson-Raybould out of the justice portfolio than the committee heard the previous week.

'If you allow a minister to veto a ... shuffle by refusing to move, you soon won't be able to manage cabinet'

When Prime Minister Justin Trudeau's former principal secretary appeared before the Justice committee today, he had a great deal more to say about his boss's reasons for shuffling Jody Wilson-Raybould out of the justice portfolio than the committee heard the previous week.

When former attorney general and justice minister Wilson-Raybould appeared before the same Commons committee last week, she said only that she received a call from Trudeau telling her she was changing jobs.

"I will not go into details of this call, or subsequent communications about the shuffle, but I will say that I stated I believed the reason was because of the SNC matter," she said. "They denied this to be the case."

On Jan. 14, Wilson-Raybould was shuffled out of the justice and attorney general role and into Veterans Affairs.

Weeks later, the Globe and Mail reported that Wilson-Raybould felt she was under improper pressure from Trudeau's people to intervene in the SNC-Lavalin case to allow the company to answer criminal prosecution on bribery charges through a remediation agreement.

On Feb. 12, Wilson-Raybould resigned from cabinet.

Under questioning before the committee last week, Wilson-Raybould said that, during her conversation with Trudeau about the shuffle, she was given a "rationale" that she would not "get into."

"I had a subsequent, very close in time, conversation with Gerry Butts, where I specifically said, 'I know this has to do with SNC and a decision that I wouldn't take.' To which he said, 'Are you questioning the integrity of the prime minister?' To which I didn't say anything."

Today at committee, Butts detailed what he said happened behind closed doors. He said that Wilson-Raybould was first offered the ministry of Indigenous Services but turned it down.

Butts insisted that "the January cabinet shuffle had nothing whatsoever to do with SNC Lavalin." He said that when Scott Brison, the former president of the Treasury Board and MP for Kings Hants, approached him on Dec. 12, 2018 to say he was going to leave politics, he tried to dissuade Brison because it would require a cabinet shuffle "and the prime minister was happy with the team he had."

"If Minister Brison had not resigned, Minister Wilson-Raybould would still be minister of justice today," Butts said. "That is a fact, and facts are very stubborn things. Cabinet selections are among the most difficult tasks for any first minister."

Butts went on to say that Jane Philpott, then the minister of Indigenous Services, was thought to be the best person at cabinet to replace Brison because she had been vice-chair of Treasury Board.

Butts also said that Trudeau met with Philpott, one on one, in his office to discuss her move to Treasury Board and that she was "excited by the challenge, especially the digital government aspects of her new file."

Philpott was concerned, Butts said, that Wilson-Raybould would view her move as a demotion, "then told the prime minister that she worried that minister Wilson-Raybould might wonder if her move were connected to [the SNC Lavalin] issue."

Butts said that was the first time he ever heard anyone suggest that the cabinet shuffle was "in any way related" to SNC-Lavalin. 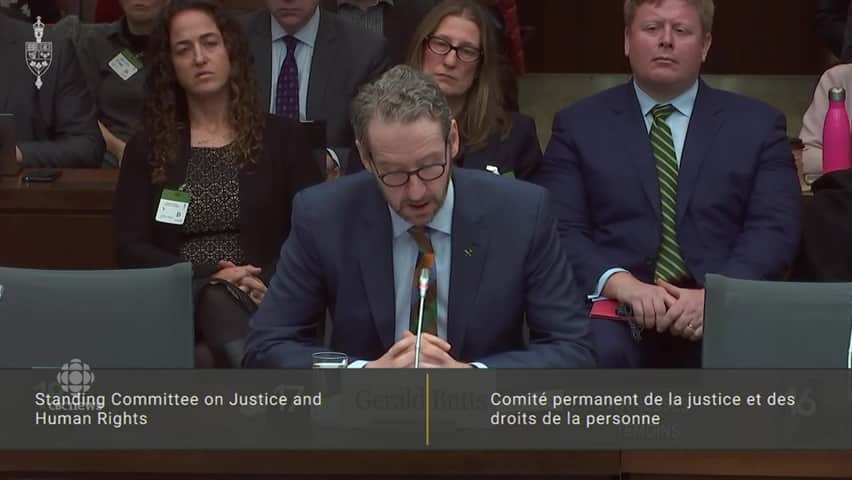 Gerry Butts: 'The PM assured minister Philpott that the shuffle had nothing to do with the file.'

2 years ago
1:01
"That was the first time I ever heard anyone suggest that this cabinet shuffle was in any way related to the SNC Lavalin file." 1:01

Butts said the decision was taken to assign Wilson-Raybould the Indigenous Services file "to show Canadians how seriously we take this."

Butts said that when Wilson-Raybould was told she was being moved to Indigenous Services, she said she did not want the job for a couple of reasons — not least of which was the fact that minister of justice job was her "dream job."

"She said she couldn't do it for the reason that she had spent her life opposed to the Indian Act and couldn't be in charge of programs administered under its authority," he said.

Butts said that over the last 13 cabinet shuffles, he had not heard of a minister refusing a cabinet post. He said that Wilson-Raybould was not kept in her position at Justice because it would set the precedent "that a cabinet minister could refuse a new position and therefore remain in one position for the life of the government." 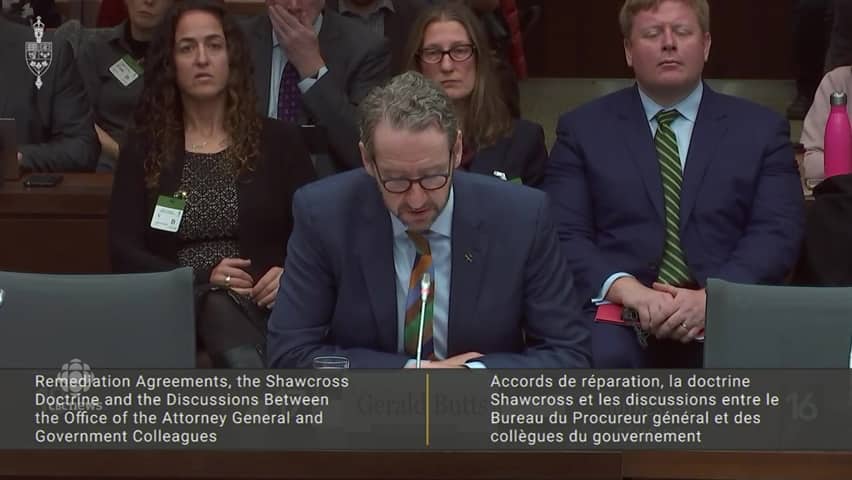 Gerry Butts: 'I feel I am being shifted out of Justice for other reasons.'

2 years ago
3:50
"If you allow a minister to veto a cabinet shuffle by refusing to move, you soon won't be able to manage cabinet. Cabinet invitations are not the product of shared decision making." 3:50

"My advice was this: If you allow a minister to veto a cabinet shuffle by refusing to move, you soon won't be able to manage cabinet," Butts said. "Cabinet invitations are not the product of shared decision-making."

As a result, Butts said, Wilson-Raybould was moved into the Veterans Affairs cabinet post — a move that appeared to those outside cabinet as a straight line move from Justice to Veterans, when it was more complicated than that.

After Butts delivered his testimony, members of the committee voted on an opposition motion to recall Wilson-Raybould to the committee for further testimony, something she said she was willing to do during her appearance last week.

Liberals on the committee voted the motion down.