What are the top five questions Canadians have about NDP Leader Tom Mulcair? Google Canada has compiled the data.

Tom Mulcair and the NDP are on the up and up. Well, if you believe the polls, that is. But unlike his main opponents, Conservative Leader Stephen Harper and Liberal Leader Justin Trudeau, his personal story is somewhat of a mystery to most Canadians.

Google Canada has released the five most-searched questions about each of the main party leaders, based on search data from the six months leading up to the election call earlier this month.

Starting today with Mulcair, CBC News is taking a deep dive to bring you all the answers. We'll look at other leaders in the coming days.

Note: Ads are produced by the candidates, their parties or their agents. They are embedded here for informational purposes only, and their placement does not constitute an endorsement by CBC News.

While the NDP might have surged in the polls, it seems many Canadians still aren't exactly sure who Mulcair really is. If you live outside Quebec — or haven't followed question period for the past two years — you might be forgiven for not knowing much about him. The first most Googled question about Mulcair is, "Who is Tom Mulcair?"

Well, to start, he was first elected to Quebec's National Assembly as a Liberal in 1994, and later served for three years in the cabinet of former premier Jean Charest, before leaving cabinet and provincial politics in a dispute over development in a provincial park. He made the leap to federal politics and to the surprise of some, chose Jack Layton's NDP party, winning a 2007 byelection.

Mulcair was a key architect of the Orange Wave that washed over Quebec in the last federal election and upended Canadian politics, sending 59 New Democrat MPs to Ottawa and breaking the stranglehold the sovereigntist Bloc Québécois had held on Quebec for the better part of two decades.

After Layton's untimely death, Mulcair clinched the title of leader of the Opposition after beating nine other candidates for the job.

As for his family life, Mulcair is married to psychologist Catherine Pinhas and they have two sons.

Oh, and sticking with the other side of the Atlantic, he once offered praise for the late Conservative British prime minister Margaret Thatcher and the Iron Lady's stewardship of the British economy.

2. Why is Harper not attacking Mulcair?

The second-most Googled question is, "Why is Harper not attacking Mulcair?"

It's no secret the Conservatives have made Trudeau and the Liberal Party target No. 1. Only days after Trudeau was elected leader of the party, the Tories bought national air time for a series of attack ads that branded Trudeau "in over his head," paired with images of him engaged in a mock striptease at a charity event.

But, until recently at least, Mulcair has been left relatively unscathed. The most the Conservatives have been able to muster is branding the NDP leader as a "career politician," without mentioning that, in fact, their leader is somewhat of a lifelong politician himself.

As to why they've avoided attacking Mulcair — a divided left-of-centre vote could split the vote in the Conservatives' favour. So a buoyant Mulcair could help the Tories, unless, of course, it looks like the NDP might actually win the election.

Public support for the bill — which gives sweeping new powers to CSIS and ramps up information sharing between government departments — began to drop and the NDP's poll numbers began to move up in lockstep. 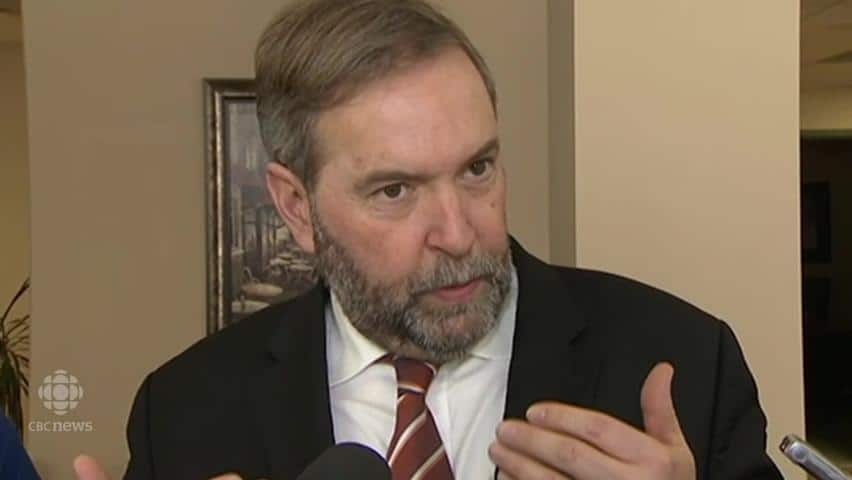 6 years agoVideo
1:06
NDP Leader Tom Mulcair says the government can protect Canadians' rights while ensuring their safety, adding the RCMP, CSIS need the resources to do so. 1:06

Trudeau and the Liberal Party have been dogged by criticism for supporting the legislation. Trudeau indicated in March that his position on Bill C-51 was meant to counter potential Tory claims about his stance on terrorism.

Trudeau has said he would amend parts of the law should the Liberals win power, saying only the Liberal Party would strike the right balance between keeping Canadians secure and protecting their rights and freedoms.

4. Is Mulcair a French name?

According to Google, the fourth most-searched question about the NDP leader is, "Is Mulcair a French name?"

No, it's not. It's a name of Gaelic origin. Mulcair was born in a bilingual and bicultural household, after all.

His father, Harry, was an insurance man of Irish descent, and his mother, Jeanne Hurtubise, a teacher, was of French-Canadian heritage. Mulcair hails from a large family — he is the second oldest of 10 (yes, 10!) kids.

5. What is Mulcair's religion?

The NDP leader was raised Roman Catholic. In his recent autobiography, Strength of Conviction, he writes about growing up Catholic in Quebec in the 1960s. "We used to say the rosary together as a family before going to bed at night."

He also reveals his deep admiration for one priest at his local high school, Father Cox.

"His homilies were calls to action. Father Cox challenged us. He inspired us. Sometimes, he drove us nuts."

But it seems Mulcair, and his pious parents, like many other Quebecers of the era, had a falling out. Mass, which was once a daily commitment, became an optional affair, Mulcair writes.