Top advisers to U.S. President Donald Trump are launching blistering attacks on Justin Trudeau for comments he made at the end of the G7 leaders' summit this weekend.

Top advisers to U.S. President Donald Trump are launching blistering attacks on Justin Trudeau for comments he made at the end of the G7 leaders' summit this weekend, with one going as far as to say the prime minister deserves a "special place in hell."

Speaking Saturday after Trump had departed for Singapore ahead of the much-anticipated North Korea meeting, Trudeau reiterated Canada's stance on the U.S. tariffs on steel and aluminum: The duties are "insulting," Canada won't be pushed around, and he plans to retaliate with dollar-for-dollar tariffs.

"There's a special place in hell for any foreign leader that engages in bad faith diplomacy with President Donald J. Trump and then tries to stab him in the back on the way out the door," trade adviser Peter Navarro told Fox News.

He blasted Trudeau for having positive conversations with the president during the G7 meetings, then changing his tune in a "stunt press conference."

Trudeau's comments only included statements he's previously made, the Prime Minister's Office pointed out in a statement, adding that Trudeau had made those remarks privately to Trump as well. 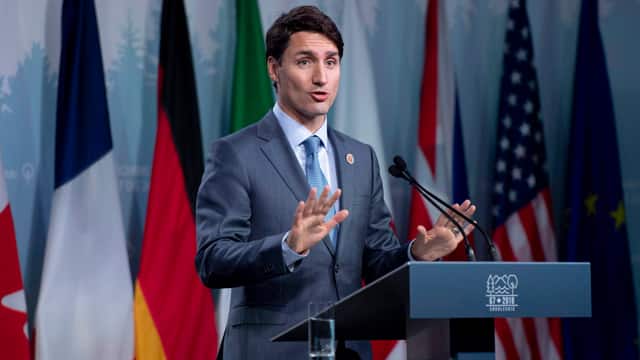 3 years ago
42:20
Prime Minster Justin Trudeau speaks to reporters at the conclusion of the G7 leaders summit in Charlevoix, Que. 42:20

"You don't walk away and start firing bullets," Kudlow said.

"POTUS is not going to let a Canadian prime minister push him around … on the eve of this," he said firmly. "Kim must not see American weakness."

Trudeau has done a "great disservice" to the G7 by saying Canada had to stand up for itself and that the U.S. was responsible for the problem with tariffs, Kudlow added.

The volleys come after Trump himself unleashed a string of tweets attacking the prime minister, sent from Air Force One as he was en route to Singapore.

It seemed the two-day G7 leaders' summit in La Malbaie, Que., had avoided descending into chaos over trade disagreements after a joint communiqué signed by all seven participating nations was issued Saturday.

But minutes after the official release of the document, Trump pulled the U.S. out of the communiqué citing "false statements" by Trudeau and calling the Canadian leader "very dishonest and weak."

Based on Justin’s false statements at his news conference, and the fact that Canada is charging massive Tariffs to our U.S. farmers, workers and companies, I have instructed our U.S. Reps not to endorse the Communique as we look at Tariffs on automobiles flooding the U.S. Market!

On Sunday, both Trump aides also said while a NAFTA deal was close, Canada's "stunts" jeopardize any progress made on the trade front. The prime minister's actions are "bungling the trade relationship," Navarro said, adding that the news conference was "nothing short of an attack on our political system."

Though tensions are running high among White House officials, it seems not every Republican appreciates the tone.

Sen. John McCain tweeted that Americans stand with Canada — even if the president doesn't.

To our allies: bipartisan majorities of Americans remain pro-free trade, pro-globalization &amp; supportive of alliances based on 70 years of shared values. Americans stand with you, even if our president doesn’t.

"I can understand why President Trump, why the American people feel they need some better trade relationships," he said. "[But] this is the wrong target."

Harper went on to say he doesn't understand the obsession the U.S. has with Canadian trade, and that he learned during his time in office to keep disagreements between the two countries isolated to those particular issues, in order not to spoil the overall relationship. 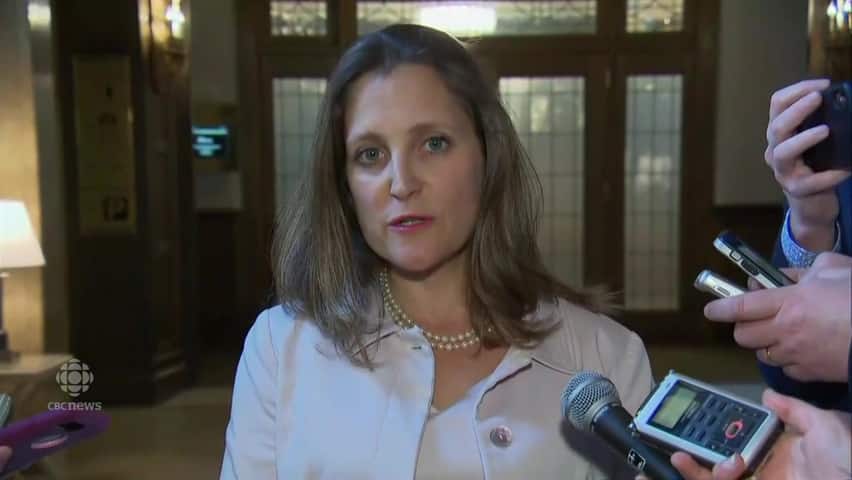 Speaking from the G7 summit site on Sunday, Foreign Affairs Minister Chrystia Freeland said the real offence for her remained the U.S. tariffs. But, she added, the insults from the U.S. officials were not appreciated.

"Canada does not believe that ad hominem attacks are a particularly appropriate or useful way to conduct our relations with other countries," she said.

Freeland said her focus will remain on fighting the "illegal" duties on steel and aluminum — not the verbal snubs from the White House.

"The most important thing is deeds rather than words," she said.

Trudeau didn't respond to reporters' questions when he arrived at the Chateau Frontenac in Quebec City on Sunday morning and has so far not engaged the U.S. president on Twitter.

With files from CBC's Katie Simpson and the Associated Press