Growing frustration over changes to veterans' pension system and other benefits has created disillusionment among some ex-soldiers and their families as Remembrance Day approaches. 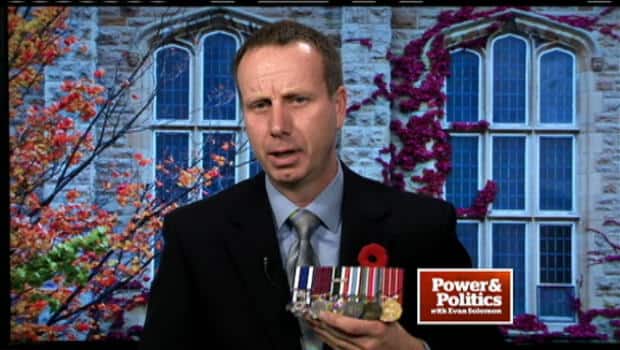 8 years agoVideo
6:54
One of Canada's most decorated veterans, retired sergeant Tom Hoppe, will not be wearing his medals on Remembrance Day in protest over the federal government's treatment of veterans 6:54

Tom Hoppe earned the Medal of Bravery and the affectionate nickname "Dances With Bullets" for his heroic August 1994 sprint into sniper fire to rescue three children pinned down in the civil war fury of Visoko, Bosnia.

That medal along with others the former army sergeant earned, including the Meritorious Service Cross will sit on a shelf this Remembrance Day in a quiet but symbolic protest against the Harper government.

The fact one of Canada's most decorated soldiers, and a respected voice in the peacekeeping community, chose to remove his medals —a decision some troops consider sacrilege — speaks volumes about the level of frustration and disillusionment among ex-soldiers and their families.

"It's very, very hard choice for me to do this ... but I don't know what else to do," Hoppe said Thursday in an interview with The Canadian Press.

"As long as people understand there's no disrespect to veterans whatsoever. It's just a choice I've made because I can't sit on the sidelines and do nothing anymore. And I've tried everything I can. I've tried to work with Veterans Affairs and the government, but every time we go to Veterans Affairs with ideas and stuff it's a confrontational approach."

The protest is also a way to show supports for ex-soldiers who have launched court challenge against the government's marquee legislation, the New Veterans Charter that was approved by all parties, enacted by the Conservatives in 2006 and defended by the government ever since.

Hoppe also said the government has failed to completely atone for a privacy scandal.

It has settled out of court with advocate Sean Bruyea, but others have yet to receive an apology, including Hoppe, whose privacy records show his medical information was sought by officials after he expressed concern about the veterans charter in 2006.

Another veteran, former warrant officer Harold Leduc, chose two weeks ago not to wear his medals in protest over his own privacy breaches.

The growing discontent, at times, mystifies and exasperates Conservatives who've introduced a series of changes and improvements meant to take the sting out of veterans' complaints.

The New Veterans Charter overhauled the way ex-soldiers are compensated and moved away from a pension-for-life system into a workers compensation-style lump-sum payment.

No matter how the government dresses it up, said Blais, the system has created two classes of veterans: those on the old system and those on the new system, who often get less and face a variety of caveats.

"We believe in one veteran, and one standard," Blais said.

In an interview with The Canadian Press, Veterans Affairs Minister Steven Blaney said the government has been transforming the system, pointing to a recent $177-million injection of cash to halt a long-term disability clawback.

"We are just a phone call away" for help, Blaney said.

That didn't stop disabled veterans and military widows from unleashing a broadside of frustration Thursday on Parliament Hill, complaining of bureaucratic indifference and red tape that flies in the face of Blaney's reassurances.

Desjardins said he was proud to serve his country.

"What I'm not proud of, however, is how our government officials and senior military leadership can look directly into the camera (and) speak to the Canadian public about honouring our veterans at this time of year with implied conviction when they've clearly turned their back on us and continue to demonstrate (that) on a daily basis," said Desjardins.

He challenged Blaney to look him in the eye "and tell me you really care."

The government recently threw its weight behind a so-called "helmets-to-hardhats" program, which helps ex-soldiers get into the construction industry. That's a wonderful resource for someone without physical limitations, said Desjardins.

A number of officials "in expensive suits" are on the record as saying there are a number of opportunities for disabled veterans, but Desjardins said many of the head hunters discriminate in favour of officers, leaving non-commissioned members out in the cold.

"I'm here to ask those suits one simple question: Show me. Show me where those opportunities and jobs are — and I'm not just asking for myself, I'm also asking for the hundreds of other disabled veterans across Canada."

Tracy Kerr, wife of a triple amputee who fought in Afghanistan, said she and her family have battled for years to get basic needs, such as a lift to get her husband in and out of the bathtub.

"I've travelled seven hours to speak to the public about how we're struggling," said Kerr, from Sudbury, Ont., her eyes filling with tears as she spoke.

"I just want a quality of life, happiness for my family and when we make requests for his needs, to get them."

Jackie Girouard, whose husband was killed by a roadside bomb in Kandahar in 2006, said the families of many soldiers are denied access to the veterans independence program, which helps with yard work and light housekeeping.

She said policies that set time limits on accepting assistance, such as two years for education and job retraining, are insensitive and unrealistic.

"I was with my husband for 31 years, and I make no apologies for how long it took to me to get this far without my husband," she said.

"They could've said to me, 'Jackie, take your time and when you're ready come see us and we'll work together to help you achieve you and your family's goals.' Those words alone would have demonstrated to me that you care."