An Ontario veteran of the Canadian Forces is fighting for retroactive pension benefits for post-traumatic stress disorder (PTSD) he says he developed after an ambush in Croatia almost 20 years ago. 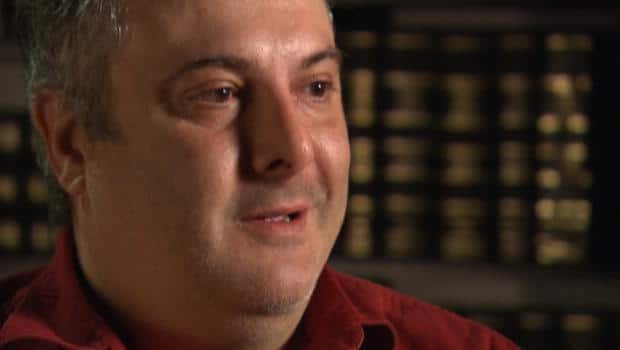 7 years agoVideo
3:20
Canadian Forces members do not feel confident about seeking help for PTSD or other mental illness, and when they do, the support they receive is limited 3:20

An Ontario veteran of the Canadian Forces is fighting for retroactive pension benefits for post-traumatic stress disorder (PTSD) he says he developed after an ambush in Croatia almost 20 years ago.

Retired sergeant John Tescione pleaded his case twice to the Veterans Review and Appeal Board and lost.

I shed blood, sweat and tears for my country physically, but I still have emotional shrapnel in me.—John Tescione

On the night of New Year's Eve in 1994, Tescione and his friend, then private Phillip Badanai, were returning from a job and driving a Canadian Iltis jeep through the Croatian town of Kolarina when they came across a group of Serbian soldiers who opened fire. Military police later counted 57 bullet holes in the vehicle, but countless more rounds were fired through the open sides of the jeep. Seven of them hit Tescione.

"I still have some rounds trapped in my skull. Four times to the head, one round took my ear, lodged inside the temple.  Part of my arm is missing, my hand, my shoulder," he said.

CBC News interviewed Tescione at the Canadian War Museum in Ottawa, where the jeep is on display, "I broke into a sweat, the anxiety of seeing it again," he said.

Remarkably, Tescione's physical injuries healed quickly, but the mental injuries festered, he said. "I was a very bad person in those days. I only wanted to self-medicate, drink and fight. I isolated myself and the only time I would go out with my friends was to do that, get drunk and fight."

Tescione has received a disability pension for physical injuries such as hearing and vision loss since 1995. Officials at Veterans Affairs and the Defence Department were helpful, he said, assisting him with reams of paperwork from his hospital bed. However, Tescione said, no one ever suggested ticking off any of the boxes on the forms for mental injuries. In his opinion, it was a critical oversight.

In the end, it took 10 years and some harsh words from a senior officer before Tescione sought help for his psychiatric problems. He was diagnosed with PTSD and started receiving benefits in 2004.

But Tescione feels the benefits should be paid retroactively to the date of the ambush, just as he has been for his physical wounds. "I shed blood, sweat and tears for my country physically, but I still have emotional shrapnel in me. I can't get back those 10 years that I've lost, that's what I feel … they're gone."

On both attempts to claim retroactive benefits, the Veterans Review and Appeal Board ruled that the Pension Act is clear — veterans may only receive benefits starting from the date they apply for them.

"More flexibility is what's required, because now there is no flexibility whatsoever," he said.

Parent has met many veterans who waited years and even decades before seeking help for psychological injuries, some of whom seek retroactive benefits.

"Obviously, if you've been shot a few times or if you've got a limb missing, I think you can assume that there will be some psychological injuries with that as well and I don't think that's the way that things are approached in Canada."

Parent said the minister of veterans affairs has some power to extend retroactivity, but it's limited to two years. He wants to see more discretion built into the law.

No one from Veterans Affairs was available for an interview and the department cannot comment on specific cases.

In an email, a spokesman repeated that veterans may only receive benefits starting from the application date, but he added that there are no limits on when a veteran may apply for a disability pension, which means someone who served in the Second World War could file an application today.