U.S. politics may be in a state at the moment - but Canadians can't afford to be smug about it

Canada's institutions seem designed to resist some of the corrosive forces undermining politics in the United States. That's a good thing - but it's no excuse for complacency.

The dysfunction in D.C. has deep roots - and we're seeing some of the same warning signs here

On any given day, it can be difficult to feel good about Canadian democracy — particularly if the day includes a session of question period, Parliament's regularly staged (but poorly acted) exchange of shouted platitudes and rote umbrage.

But it could be much worse, as a glance at the United States over the past week would make clear — and not only because Washington has been consumed by President Donald Trump's impeachment trial.

The American example of late is a useful benchmark these days for measuring the relative efficacy of Canada's institutions. It also offers a stark warning against complacency.

To start, ask yourself which you prefer: the prime-time partisan spectacle of a State of the Union address or a speech from the throne — where the leader of the government is made to sit quietly in a wooden chair while a statement of the government's priorities is read flatly by a representative of the country's distant, but deferential, head of state? 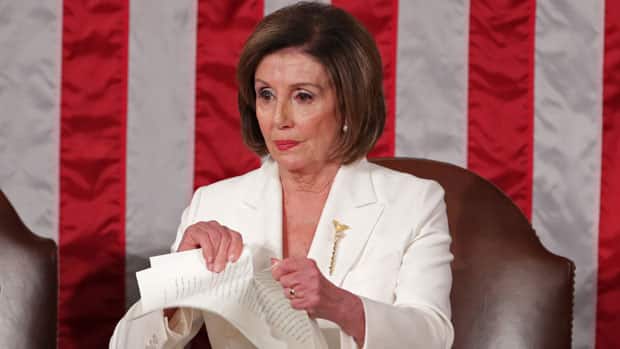 12 months agoVideo
0:35
As U.S. President Donald Trump finished his state of the union address on Tuesday, House Speaker Nancy Pelosi ripped up her copy of his speech. Tensions between the White House and the Speaker heightened as Pelosi led the impeachment case against Trump. 0:35

As the Conservative Party of Canada entered the third week of a leadership contest that will take six-and-a-half months to complete, the Democratic Party in the U.S. had only just completed the first round of a presidential primary that has already been running for a year — and may not be decided until late April, after a series of staggered and separate state-level contests.

Notwithstanding the mathematical mess of last week's caucuses in Iowa, the race could swing in a month with the official entry of Michael Bloomberg, a billionaire who is spending millions of dollars of his own money to finance a late bid for the Democratic Party's presidential nomination.

The weight of wealth in politics

Bloomberg's candidacy is only remotely viable at this point because of his immense personal wealth — an asset that would not help him much in Canadian federal politics, where leadership candidates can only put $25,000 of their own money toward their campaigns, and where donations are capped at $1,625.

Whoever the Democratic candidate turns out to be, he or she will have to contend with the historical oddity of the Electoral College — an institution that has, twice in the past 20 years, awarded the presidency to someone other than the candidate who actually won the most votes. But even if that Democrat wins the election this time, the new president could struggle to implement an agenda in the face of two separate and elected legislative chambers — along with the structural and procedural obstacles that make it difficult for anyone to do much of anything in U.S. federal politics.

The Canadian system is very far from perfect. Excessive party discipline still dulls the minds of politicians (and all those who are exposed to the endless repetition of partisan talking points). The access-to-information system remains more of a notion than a functioning tool for transparency. Proponents of proportional representation will never stop pining for the way they do things in many European countries.

Canada has also been lucky. Twenty-one years before Brexit upended the United Kingdom, Canada narrowly avoided a break-up over our own referendum.

A system that works (mostly)

But there are many aspects of government here that seem to work better than what we're seeing in the other large, multicultural democracy next door.

The boundaries of electoral districts in Canada are drawn by independent, non-partisan commissions. Political donations and spending activity are strictly regulated and elections are overseen by an independent national agency.

The electoral system produces governments that can implement the policies they promised to pursue, and those governments are replaced at regular intervals. The ability of a xenophobic or nationalist party to gain power is significantly limited by the combination of first-past-the-post and a large number of ridings where visible minorities represent a significant share of voters.

An independent and appointed Senate acts as a check on the House of Commons, while still generally deferring to the elected chamber, thus avoiding the sort of gridlock common in the United States. Our unelected head of state's appointed representative eschews politics, represents the nation, acts as a backstop to settle disputes over who should govern and imposes a measure of humility on the prime minister.

Whatever its flaws, the Canadian system works far more often than it doesn't.

A vote of confidence

The current state of affairs in the United States is not entirely the result of its institutions. America's problems go much deeper and include a fractured media environment.

But it's fair to wonder how much better off the United States might be with a different set of institutions, and whether Canada's institutions might have something to do with whatever success this country has achieved.

This isn't a moment for self-congratulation. If anything, what's happening to American politics right now should serve as a warning of how far a democracy can stray into dysfunction. And it's not hard to find similar warning signs in Canada.

As Michael Valpy and Frank Graves wrote last week, the opinion gap between Liberals and Conservatives on issues like climate change and immigration is growing. While public satisfaction with democracy in Canada remains relatively high, it has dropped significantly in Alberta. And the Teck Frontier project is now being spoken of both as a referendum on the rest of the country's support for that province and as a test of Canada's willingness to combat the global threat of climate change.

Canada's parliamentary system might be better suited to deal with polarization, but no system is foolproof. In ways big and small, the quality of a country's politics ultimately depends on the goodwill and discretion of its participants, and the faith and vigilance of its voters.

Whatever solace can be taken from Canada's relative ability to function, the abiding lesson of this moment is to take nothing for granted.