U.S. to focus on climate change, oceans as new chair of Arctic Council

The United States is starting its term as chair of the Arctic Council by adamantly steering clear of geopolitical and military issues, in favour of focusing on social and environmental stewardship of the North.

Canada's 2-year term as chair comes to an end 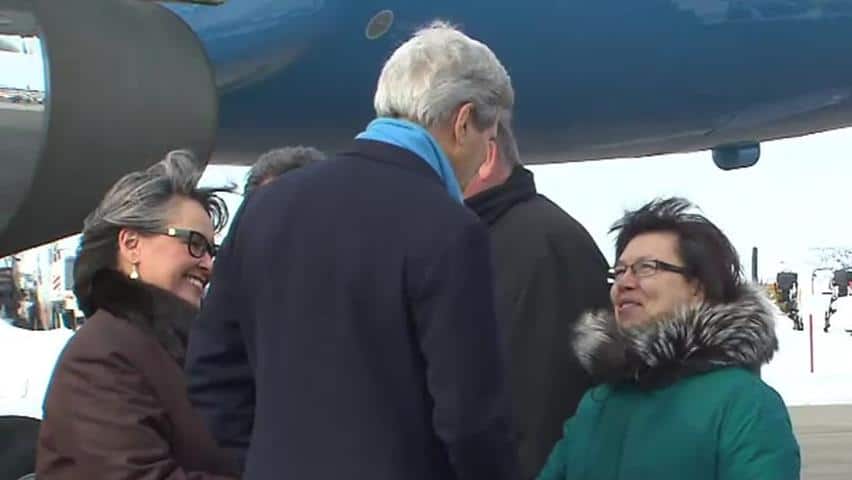 The United States is starting its term as chair of the Arctic Council by adamantly steering clear of geopolitical and military issues, in favour of focusing on social and environmental stewardship of the North.

This comes after some have raised concern about Russia's activities in the Arctic, deploying large forces in a show of military might. About 76,000 troops, over 100 ships and more than 200 aircraft took part in Arctic manoeuvres last month.

U.S. Secretary of State John Kerry said the council has "a functional process" in place with which to address social and environmental issues. To wade into military issues "could really deter" from the overall work of the council, he said during Friday's closing news conference in Iqaluit.

Kerry said there are other forums to pursue those issues, such as the G7, G20 and NATO.

It's a step away from Canada's leadership, evidenced by Environment Minister Leona Aglukkaq's intentions to use the one-day ministerial meeting as an opportunity deliver Canada's "tough message to Russia for their aggression against Ukraine." Critics had said allowing geopolitics to enter in the council's discussion runs counter to its philosophy of consensus and could risk dysfunction.​

Canada handed off its two-year chairmanship of the Arctic Council to the United States during Friday's gathering, where senior diplomats and ministers from eight Arctic nations, as well as leaders of northern indigenous groups, gathered in Nunavut's legislative assembly to discuss shared issues and mutual co-operation.

The U.S. plans to put climate change at the centre of its leadership. Kerry said that there is a plan in place to try to curb black carbon and methane emissions which, he said, have more devastating environmental effects than C02.

"We all share one Arctic," he said, adding that work needs to be done to ensure the future of this "vital and sensitive" region.

Another pillar of the U.S. plan is stewardship and safety of the ocean, which he said is over-polluted and over-acidified at great risk to marine ecosystems.

The third pillar, Kerry said, is improving economic and living conditions of people in the Arctic.

"The economy and environment are not divergent priorities. On the contrary, they're inextricably linked. The people in the region tell us this all the time," he said. "They don't think it's necessary for it to be a zero-sum game — one wins, one loses."

Earlier, during the two-hour meeting, Aglukkaq presented the council's achievements under Canada's leadership.

"As a Canadian, born and raised in Canada's Arctic, I am proud Canada has advocated putting northerners at the forefront of the Arctic Council agenda," Aglukkaq said in her opening statement.

It includes the creation of the independent Arctic Economic Council, bringing attention to mental health in the region, and addressing climate pollutants such as black carbon.

Aglukkaq also emphasized the need for the council to be accountable to people living in the North.

"As Canada concludes our chairmanship today, I know this: a successful Arctic means we must incorporate the people into our future decisions," she said.