It's been less than two weeks since dairy sector spokespeople from across Canada all raised their hands when asked how many of them believed the Trudeau government would defend their industry in the NAFTA talks. How quickly things change.

It's been less than two weeks since dairy sector spokespeople from across Canada were asked how many of them believed the Trudeau government would defend their industry in trade talks.

The prime minister had promised he would, right? Taking him at his word, all the farmers raised their hands.

As of Monday afternoon, at least one of those spokespeople said he was still waiting to be briefed on the triple-whammy of concessions Canada just gave up in the new U.S.–Mexico–Canada trade agreement. Not only did Canadian dairy farmers lose an additional 3.6 per cent of their market — the part unnamed federal officials disclosed right away Sunday night — but the new deal also imposes unprecedented export controls and ends a dairy ingredient pricing system that was helping dairy processors compete without using cheap American imports. Those concessions required more digging to understand.

Dairy farmers are no longer an obstacle to trade deals, Dairy Farmers of Ontario spokesman Ralph Dietrich told CBC News Network. On the contrary, his industry's sacrifices now seem to be "what makes trade deals happen."

He may have a point about farmers being useful bargaining chips.

U.S. President Donald Trump's repeated fixation on Canadas "high" and "unfair" dairy tariffs pretty much spelled out Canada's price of admission — particularly after a preliminary agreement was reached with Mexico in late August.

Giving Trump a "win" on dairy no doubt greased the wheels for Canadian negotiators. But in Prime Minister Justin Trudeau's words, Canada at least didn't give in to U.S. demands to dismantle the entire marketing board system.

"Yes, supply management per se is not taken away from us," Dietrich said. "But there is such a thing as death by a thousand cuts."

The original NAFTA did not give dairy market access to the U.S. But a small amount of American dairy imports enter under World Trade Organization rules, or because customs loopholes allow dairy ingredients like diafiltered milk or ultrafiltered milk products to slip in tariff-free.

Canada's three biggest trade deals — the Comprehensive Economic and Trade Agreement (CETA) with the European Union, the Comprehensive and Progressive Trans-Pacific Partnership (CPTPP) and now this revised North American deal — together serve up nearly 10 per cent of Canada's market to foreign farmers and processors, Dietrich said.

'Trying to buy us over'

"We had a system where we didn't need compensation," Dietrich said. The pricing and import controls in Canada's marketing board system were tailored to guarantee reliable compensation for producers.

Now, Canada is falling into the "trap of the rest of the world," he said, where taxpayers pay to keep farmers afloat.

The Trudeau government's promise of a compensation program amounts to "trying to buy us over," Dietrich said.

But deals like this risk collapsing the entire supply management system, he said. "Then they'd really have to compensate us."

That won't exactly be music to Finance Minister Bill Morneau's ears as he ponders his fall economic statement and next spring's final budget before the 2019 federal election.

When TPP negotiations concluded during the 2015 election, the previous Conservative government reckoned that a smaller dairy concession than the one in the USMCA would require compensation of more than $4 billion.

Farmers "will be fully compensated because that is the fair thing to do," Foreign Affairs Minister Chrystia Freeland said during her news conference Monday. 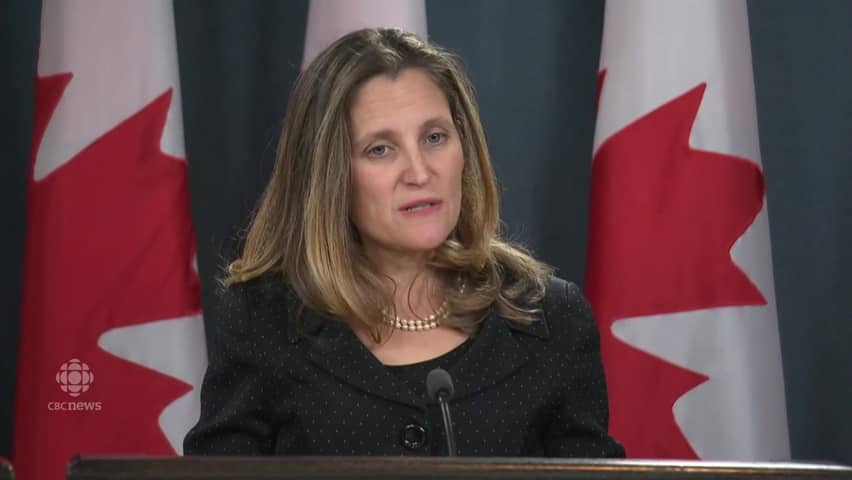 Dairy, poultry producers to be compensated under USMCA

But unlike the case of the TPP (the Conservatives had compensation details ready to roll out when the TPP concessions were revealed), the feds had no reassuring details to offer Monday.

Freeland said her government was taking the time to "get that compensation right."

In fact, the government hasn't yet announced what sort of compensation it intends to offer for the CPTPP — an agreement that might be ratified and ready to take effect this winter.

It's unclear whether Liberals will follow the model of the innovation fund offered as compensation for CETA: a $350 million strategy to help industry compete. It was gobbled up and completely spoken for shortly after funds became available.

More competition on the way

The hope of those in favour of liberalizing dairy markets is that more competition brings the price of Canadian dairy products down for consumers. But at least one analyst interviewed by CBC News Monday suggested little would change for consumers.

Fewer than one in five U.S. farms use hormones, and a quick spin through U.S. grocery aisles reveals many American dairy brands proactively marketing their dairy as hormone-free to appeal to consumers.

Hormones are banned for Canadian milking herds — not because of health risks for human milk consumers, but because the cows who received the hormones got sick.

With more U.S. imports on the horizon, the Canadian industry proactively developed a new logo to make it easier for hormone-cautious consumers to differentiate between dairy that was 100 per cent Canadian and products that might contain U.S. milk.

The USMCA language sets a curious new precedent in Canadian trade deals by setting a cap on how much Canadian dairy product can be exported not to the other two NAFTA partners, but to the rest of the world — exports that would compete with U.S. dairy products globally.

Canada is a relatively small dairy exporter. The World Trade Organization permits supply management to exist because it focuses on price and supply controls for Canada's domestic market, rather than distorting global markets.

Nevertheless, Canada has now agreed to monitor its global exports of milk protein concentrates, skim milk powder and infant formula and provide the information to the U.S.

If Canada should exceed specified thresholds, its exports would face an additional charge to make them more expensive for customers elsewhere.

Unlike the voluntary export restrictions Canada agreed to in a side letter on the automotive sector, the caps Canada agreed to for skim milk powder, for example, appear to be lower than the amount Canada exported last year.

"This deal lets the Americans dictate our dairy policies," a release from the Dairy Farmers of Canada said Monday.

Politically, it would be easier to dismiss grumpy dairy farmers if they didn't have solid backing in at least two provinces — Ontario and Quebec — that might be spoiling for a good jurisdictional fight.

The milk classes ended by the USMCA are not the federal government's to dismantle. Marketing boards fall under provincial jurisdiction. The idea of a special dairy ingredient price emerged from a compromise farmers and processors reached on their own.

In the dying hours of Quebec's election campaign, Liberal Leader Philippe Couillard said the future of the family farm was being threatened by this deal, and Quebec would use any means at its disposal to fight back.

He didn't specify what that might mean. A court challenge? Something else? And on Monday night, his party lost the election.

But his successor has expressed support for Quebec's dairy industry too.

Quebec is the only province required by law to vote on new international trade treaties. If the next government of Quebec refuses to pass the USMCA, the Liberals' political headaches in Quebec may not wait for the judgment of federal voters in 2019.

Canada's premiers mostly held their tongues until a deal was in hand. They could start speaking out now. Trudeau might have another bruising federal-provincial fight on his plate.