Donald Trump's trade adviser is apologizing for saying there's a "special place in hell" for Prime Minister Justin Trudeau because of his "bad-faith diplomacy" during the G7 summit in Quebec.

Foreign Affairs Minister Chrystia Freeland said today Canada expects "moments of drama" from Washington and will remain calm when they happen — even after President Donald Trump expanded his verbal assault against Prime Minister Justin Trudeau to include a warning for "the people of Canada."

Trump told a news conference in Singapore Tuesday that he was surprised by Prime Minister Justin Trudeau's closing news conference at the G7 summit, during which Trudeau said Canada would "not be pushed around" on trade.

Trump, who had taken to Twitter over the weekend to call Trudeau "weak" and "dishonest," said that comment was going to cost "a lot of money for the people of Canada."

Trump said he watched that news conference on his way to Singapore — where he held a historic meeting with North Korean dictator Kim Jong-un that failed to secure a timeline for the country's promised elimination of its nuclear arsenal — and was upset because he thought he and Trudeau had engaged in a positive meeting at the G7 summit in Charlevoix, Que.

"You can't do that," he said. "I see the television and he's giving a news conference about how he 'will not be pushed around' by the United States. And I say, 'Push him around? We just shook hands!"' 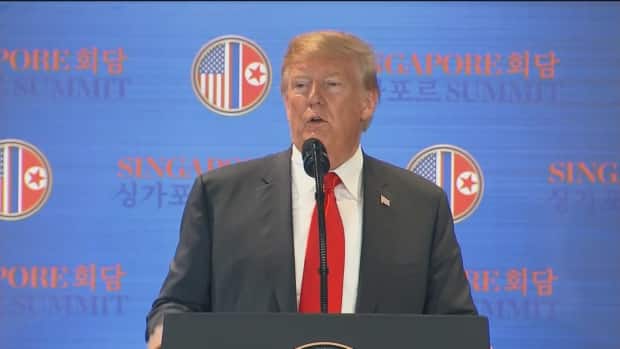 3 years agoVideo
0:38
'He learned, that's going to cost a lot of money for the people of Canada,' U.S. president says, responding to Trudeau remarks on trade 0:38

"From the very outset we have said that we welcome the opportunity to modernize NAFTA and we think there are real opportunities to bring a very good agreement into the 21st century.

"And from the beginning we have said that our approach would be to hope for the best, to work for the best possible outcome, but to always be prepared for the worst, to have a Plan B, C, D, E and F and maybe to the end of the alphabet."

In an interview with the New York Times back in June 2017, the prime minister said there was "no need for a Plan B" on NAFTA and insisted the deal was too important to terminate.

With NAFTA talks slumping, the United States has imposed 25 per cent tariffs on steel from Canada, Mexico and the European Union, and 10 per cent tariffs on aluminum. The Liberal government has announced it will impose retaliatory tariffs on metals and a variety of other U.S. products by July 1.

While Trump shows no signs of ending his public rants against Canada soon, his trade adviser is walking back his claim that there's a "special place in hell" waiting for Trudeau because of his "bad-faith diplomacy" at the G7.

Peter Navarro told a Wall Street Journal event in Washington Tuesday that it was his job to send a "signal of strength" after Trudeau's remarks upset Trump.

But "the problem was that in conveying that message, I used language that was inappropriate," he said.

"I own that. That was my mistake, those were my words."

Trudeau said the Liberal government looks forward to seeing the details of the agreement that emerged from Monday's historic meeting between Trump and Kim.

"We support the continuing efforts by the president on North Korea, [and] we look forward to looking at the details of the agreement," Trudeau said.

The prime minister meets with Canadian dairy farmers today. Trump has taken issue with Canada's supply management system, which levels tariffs of up to 300 per cent on imported dairy products.

On Monday, MPs in the House of Commons approved a motion endorsing Trudeau's decision to stand his ground against U.S. tariffs and tweeted presidential threats.

The motion calls on the House to recognize the importance of Canada's "long-standing, mutually beneficial trading relationship" with the U.S. and opposes the "illegitimate tariffs" imposed on steel and aluminum. It also calls for the House to stand "in solidarity" with the Trudeau government's decision to impose retaliatory tariffs.

It ends with a dig at Trump, calling on the House to "reject disparaging and ad hominem statements by U.S. officials which do a disservice to bilateral relations and work against efforts to resolve this trade dispute."​ 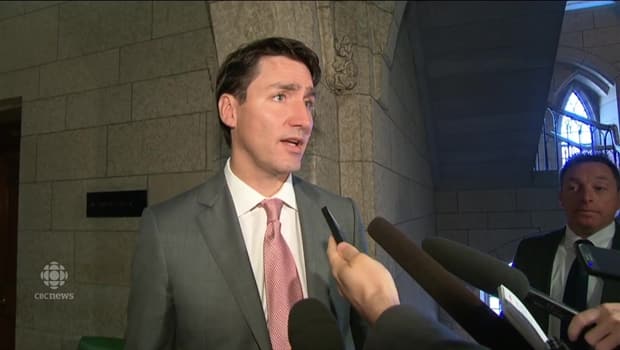