Trump is a deal-maker, not an ideologue, Canada-U.S. expert says

One leader is a proud feminist who appoints women to fill half his cabinet posts. The other calls women who challenge him pigs and slobs.

One leader welcomes Syrian refugees to his country. The other insists he'll send them back because they might be terrorists.

These are just two examples of the differences in the political approach, and in the core beliefs, of Prime Minister Justin Trudeau and U.S. president-elect Donald Trump.

They're about as opposite as any two leaders can be. And, counter to the old saying, in politics opposites rarely attract.

Yet, Trudeau will have to find a way to advance critically important issues — such as trade, security, climate change and energy policy — with an incoming president with whom he shares so little in common, a man prone to taking to Twitter in the dead of night to respond to the smallest of slights, either real or perceived.

"The relationship between Canada and the United States is based on shared values and shared hopes and dreams, and we will always work well together," the prime minister told thousands of young people attending a WE Day event in suburban Ottawa on Wednesday.

"We are strong because we listen to each other and we respect each other. The fact is, we have heard clearly from Canadians and from Americans that people want a fair shot at success." 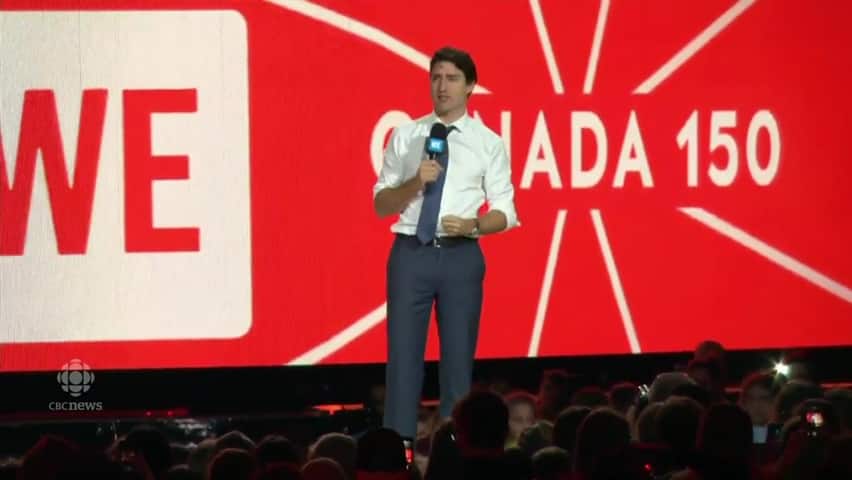 Trudeau swept to power last year on a promise to lower taxes for the middle class, and to create job opportunities for those seeking to join it. Trump, in his own way, is promising much the same by lowering tax rates for all income classes and offering higher deductions for families, child care and seniors.

But it's right about there that any similarities end between the coarse, anger-fuelled Trump and the urbane, sunny ways of the younger Trudeau.

Trump's most extreme views are well-known.

He's vowed to build a wall between Mexico and the U.S. and to make Mexico pay for it.

He's said he'll deport millions of illegal immigrants, rip up NAFTA and get out of the Trans-Pacific Partnership.

And he's said he'll pull the U.S. out of the Paris Accord, calling climate change a hoax created by the Chinese to undermine U.S. businesses overseas.

Those last two, trade and climate change, will have a direct impact on Canada if Trump follows through with his campaign promises. They will surely be among the first issues Trudeau needs to address when he and Trump meet in the new year.

Interim Conservative Leader Rona Ambrose wants Trudeau to reach out to Trump right away to press for a reversal of President Barack Obama's decision to reject the Keystone XL pipeline from Alberta to oil refineries on the U.S. Gulf Coast.

And there's a renewed push to negotiate a new deal on softwood lumber to head off another crippling trade war.

Scotty Greenwood, senior adviser to the Canadian-American Business Council and one of the most knowledgeable experts on relations between the two countries, says the differences between Trump and Trudeau shouldn't prevent them from developing a healthy working relationship.

"You don't need a bromance at the top to continue to get things done," she said, adding Trudeau's response to Tuesday's election has been "pitch-perfect."

She separates the campaign rhetoric Trump used — his vow to rip up NAFTA, for example — from what he will do once he formally takes office in January.

"Remember, the president-elect is not an ideologue. He's a deal-maker. He knows a good deal when he sees one. When he talks about ripping up NAFTA, he's thinking of Mexico and the loss of American manufacturing jobs to that country. Not Canada."

'You don't need a bromance at the top to continue to get things done.' - Scotty Greenwood, senior adviser to the Canadian-American Business Council

Liberal MP Wayne Easter is Canadian co-chair of the Canada-U.S. Interparliamentary Group. He says Canadians need to take a deep breath before worrying about what Trump will do once he's ensconced in the White House.

"He's going to quickly realize the difficulties of governing and balancing that new reality against the commitments he made in the campaign."

He says trade and climate change will both be a major focus of meetings between Canadian MPs and their counterparts in Congress during the so-called lame-duck session between now and January, and beyond.

"We have to work on them so they understand our approach, that it's possible to protect the environment while advancing economic growth."

Others aren't so sure.

Some foreign policy analysts say Canada will have to review its plan to put a price on carbon emissions in 2018, which will rise to $50 a tonne by 2022. They argue it will make Canadian companies less competitive than those in the U.S.

New Democrat MP Nathan Cullen says his party will urge the prime minister "to hold on for dear life to Canadian values" in any conversation he has with a political leader who targeted Mexicans, Muslims, immigrants, women and other groups for political gain.

"Trump might surprise and find diplomacy in his character," he said. "It's not his strong suit. It isn't what got him elected. Yet office changes people. When people come into that responsibility and are briefed every morning on the state of the world and their role in it, I hope he can elevate it and the people he brings into cabinet can do the same."

There are questions about just how much Trump actually knows about Canada. He did mock the country's universal health-care system in one of the debates. Key advisers such as former New York mayor Rudolph Giuliani, already being touted for a cabinet post, have done the same.

He's going to quickly realize the difficulties of governing and balancing that new reality against the commitments he made in the campaign.- Liberal MP Wayne Easter

"How many of you have ever gone to Canada for health treatment?" Giuliani asked during a Trump rally. "Do you know what it's like? It's terrible, right? You stand in line and then you die!"

The good news is that others in Trump's inner circle do know Canada. The head of his transition team, New Jersey Gov. Chris Christie, is one of them.

There are also opportunities for Canada to replace the U.S. as a destination for foreign investment, particularly from countries Trump has bashed such as Mexico and China.

This country could also attract talented foreigners who want to come to North America to advance their businesses or develop their ideas, but see a United States that's less welcoming.

Trump's slogan is to Make America Great Again. Trudeau's challenge is to make sure it doesn't happen at the expense of this country.