After a week of lobbing barbs at Prime Minister Justin Trudeau on social media, U.S. President Donald Trump was in a playful mood with the Canadian leader Friday.

After a week of firing criticisms at Prime Minister Justin Trudeau on social media, U.S. President Donald Trump displayed a more playful mood before a meeting with the PM Friday, joking that Canada had agreed to drop all tariffs against the U.S.

Trudeau quipped in return that NAFTA talks were in "good shape" — a reference to the major trade irritants that remain between the two countries.

After rather staid opening remarks from Trudeau ahead of his private meeting with the U.S. leader, the former reality TV star president joked that Trudeau has now agreed to "drop all tariffs, all trade barriers between Canada and the U.S. I'm very happy about that."

"And I say NAFTA is in good shape," Trudeau replied, a smile spreading across his face. 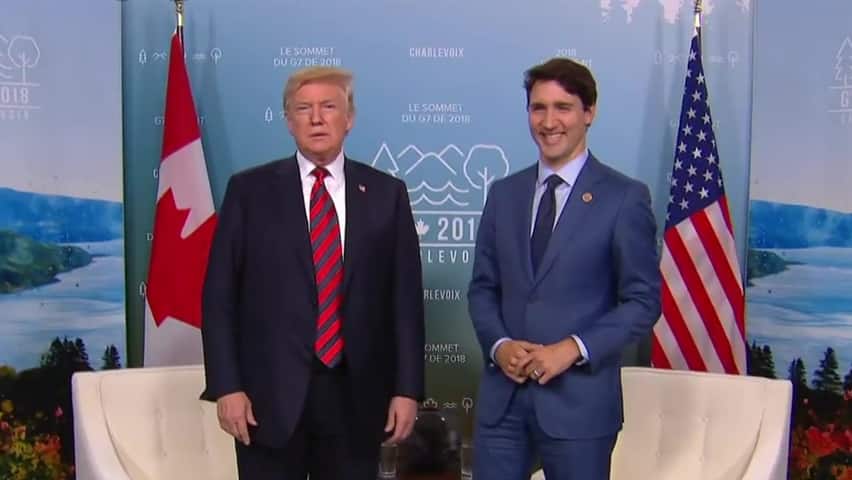 Trudeau sits down with Trump

3 years agoVideo
1:55
Prime Minister Justin Trudeau and US President Donald Trump held a bilateral meeting on the edges of the G7 Summit in La Malbaie Quebec 1:55

Adopting a more serious tone, Trump then said he thought it would be best for Canada and the U.S. to pursue a bilateral trade agreement rather than push ahead with a negotiated NAFTA with Mexico.

Canadian officials have said repeatedly they are still eager to secure a deal between all three NAFTA signatories. 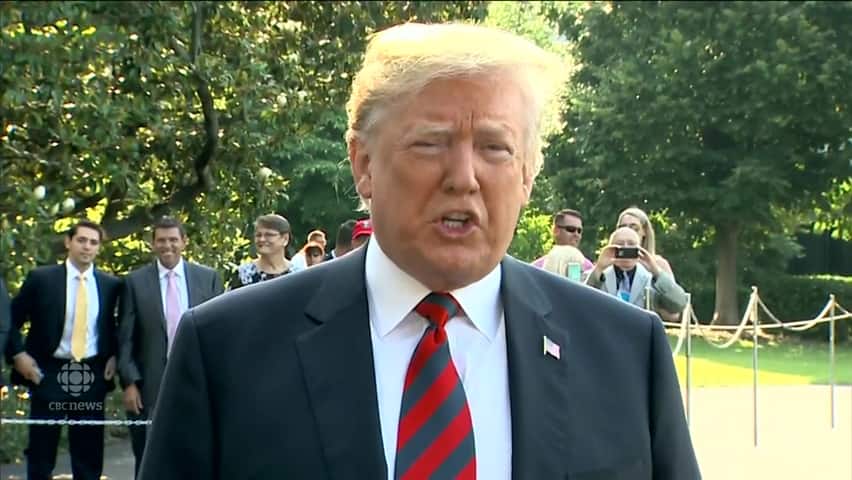 3 years agoVideo
1:40
US President Donald Trump is travelling to the G7 meeting in Charlevoix 1:40

NAFTA talks have soured in recent weeks as the U.S. has refused to budge on its demands for an overhaul of the deal's auto component and for a sunset clause.

The leaders' comments were made ahead of their bilateral meeting on the sidelines of the G7 summit in La Malbaie, Que., where trade issues have dominated the agenda due to a protectionist push by the Trump administration. After initially exempting major allies, Trump has levied punitive tariffs on Canadian and EU aluminum and steel imports.

The meeting between the two leaders lasted about an hour before Trump was whisked away to meet with French President Emmanuel Macron, another G7 leader Trump has jabbed on Twitter in recent days over his vocal opposition to the U.S. tariffs. Ahead of that meeting, Trump told reporters: "We had a very, very good meeting on NAFTA with Justin."

Trump has made such positive-sounding statements in the past — even as his negotiators have pursued NAFTA policies Canada and Mexico have called "poison pills."

Relations between Trump and Trudeau are arguably at their lowest point since the former real estate developer ascended to the Oval Office — a result of Trump levying those punitive tariffs on Canadian aluminum and steel imports on national security grounds. That justification has since been dismissed by Foreign Affairs Minister Chrystia Freeland as "ludicrous."

Trump has fired back against such criticisms on Twitter, calling Canada's supply-managed dairy sector unfair to U.S. farm interests.

"Looking forward to straightening out unfair Trade Deals with the G-7 countries. If it doesn't happen, we come out even better!" Trump tweeted earlier Friday before touching down in Quebec. "Canada charges the U.S. a 270% tariff on Dairy Products! They didn't tell you that, did they? Not fair to our farmers!"

In a similar tweet Thursday evening, Trump again attacked Trudeau by name, citing his support for the country's dairy industry protections as a source of tension. 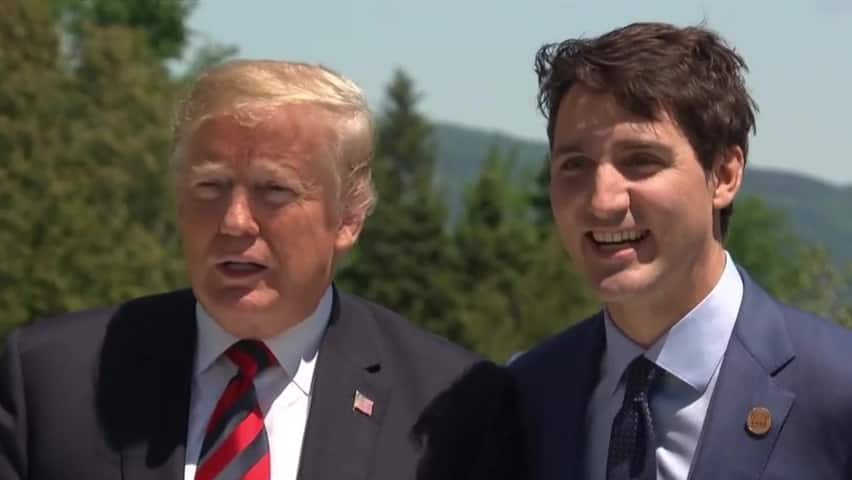 3 years agoVideo
1:31
US President Donald Trump was welcomed by Prime Minister Justin Trudeau and Sophie Gregoire-Trudeau at the Manoir Richelieu 1:31

"Prime Minister Trudeau is being so indignant, bringing up the relationship that the U.S. and Canada had over the many years and all sorts of other things," Trump tweeted. "He doesn't bring up the fact that they charge us up to 300% on dairy — hurting our Farmers, killing our Agriculture!"

Supply management is a longstanding issue for Trump, who was convinced by dairy farmers in swing-state and dairy-rich Wisconsin that Canada's system is to blame for sinking profits on some farms.

Canada levies a tariff of 270 per cent on milk, 245 per cent on cheese and 298 per cent on butter in an effort to keep U.S. and other foreign dairy imports out.

Canada charges the U.S. a 270% tariff on Dairy Products! They didn’t tell you that, did they? Not fair to our farmers!

Looking forward to straightening out unfair Trade Deals with the G-7 countries. If it doesn’t happen, we come out even better!

Canada's dairy producers introduced new prices for some products in 2016 — mainly on ingredients used in the production of cheese, yogurt and ice cream. That put some U.S. exports at a competitive disadvantage against their Canadian equivalents, resulting in job losses in some U.S. states.

Others point to massive overproduction, and excess capacity, as the source of the U.S. industry's woes. Some observers describe American griping about financial supports for farmers as the height of hypocrisy, given the generous subsidies many receive from Washington.

U.S. negotiators in the stalled NAFTA talks have sought concessions on dairy products, but Trudeau reiterated Thursday that his government strongly supports the current system that uses quotas to control the amount of dairy products produced by farmers, to ensure the national supply matches expected demand.

Before the start of the G7 summit, at a campaign stop in Saguenay, Que. for an upcoming federal byelection, Trudeau said Canada wouldn't back down in the face of Trump's rhetoric.

"There's a reason why Donald Trump continues to write tweets on dairy products and Canada — it's because I've told him many times: 'No, he won't touch, we won't touch, our supply management system,'" Trudeau told reporters.

"We will always defend our supply management system." 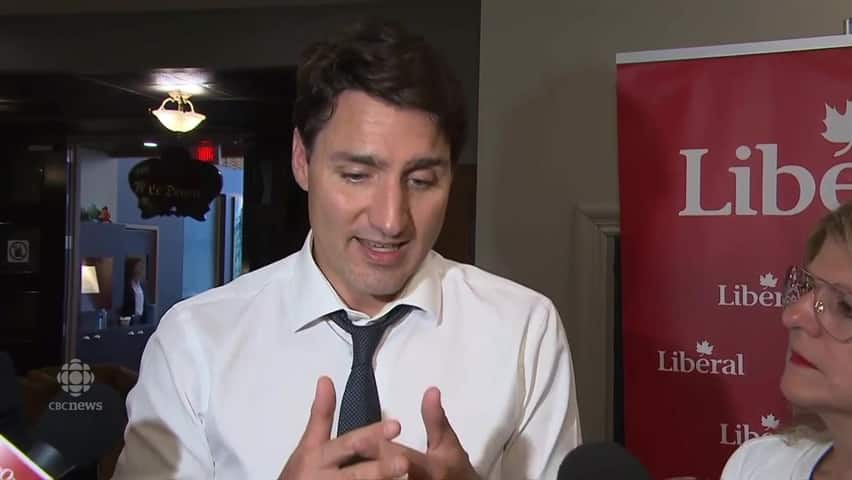 However, U.S. Agriculture Secretary Sonny Perdue said in a recent interview with a U.S.-based farm publication that Canada offered the Americans some tariff-free market access for dairy products — along the lines of what Canada conceded through the Canada-EU free trade deal and the Trans-Pacific Partnership — as part of the NAFTA talks.

Perdue did not indicate how much additional access Canada offered at the NAFTA table, but said it wasn't enough. Trudeau himself recently told NBC News that Canada was "moving toward ... flexibility" in allowing further foreign access to the protected dairy market.

The Canadian Dairy Commission, which works with the provincial milk marketing boards to co-ordinate quotas and pricing, has consistently defended the system as a way to avoid surpluses and shortages.

Trudeau reminded farmers in Quebec it was his father's Liberal government that put supply management in place in the 1970s to help stabilize farmers' income, and he supports its continued existence not because of nostalgia, but because it works.

He then jumped onto a stage at a protest site assembled near his byelection campaign stop, promising dairy farmers gathered there that he had their backs.

A senior government official, speaking to CBC News on background Thursday, sought to spin Trump's dairy-related tweets as a positive — as proof that Trudeau has strongly defended the interests of Canada's farmers in the NAFTA talks.

In a sign Trump is principally focused on discussions about the economy at this G7 (the president will leave the summit early Saturday, skipping sessions on climate change, clean energy and oceans), he brought along some of his top economic advisers, including former TV personality turned director of the president's national economic council Larry Kudlow, and U.S. Trade Representative Robert Lighthizer.

In recent days, Trump's other Canada-focused tweets have included:

And following Trudeau's remarks Thursday, Trump tweeted this: "Please tell Prime Minister Trudeau and President Macron that they are charging the U.S. massive tariffs and create non-monetary barriers… Canada keeps our farmers and others out. Look forward to seeing them tomorrow."