U.S. President Donald Trump says he'll only exempt Canada from the tariffs he has been threatening to impose on steel and aluminum imports if a "new and fair" North American Free Trade Agreement is signed.

If tariffs imposed, Canada will 'take responsive measures to defend our workers and our industry': Freeland

U.S. President Donald Trump says he'll only exempt Canada from the tariffs he has been threatening to impose on steel and aluminum imports if a "new and fair" North American Free Trade Agreement is signed.

Calling the trade pact a "disaster" that has pulled factories and jobs from the U.S., Trump said the new tariffs would only be dropped as part of a successful renegotiation of NAFTA. He called it disgraceful that past presidents have not addressed trade issues that have cost the U.S. hundreds of billions of dollars through a "very bad deal" with Canada and Mexico.

"If we don't make a deal I'll terminate NAFTA, but If I do make a deal which is fair to the workers and to the American people, that would be, I would imagine, one of the points we'll negotiate, will be tariffs on steel for Canada and for Mexico," he told reporters during a photo op with visiting Israeli Prime Minister Benjamin Netanyahu.

"So we'll see what happens."

As the seventh round of NAFTA talks wrapped up in Mexico City today, Foreign Affairs Minister Chrystia Freeland said any updated NAFTA must be good for all three countries — and called the tariff proposal "absolutely unacceptable."

Speaking to reporters, Freeland said she was unwilling to reveal what kind of trade response Canada will offer to the tariffs — but confirmed there will be one.

"If necessary, we would consider any section 232 action directed at Canada to be totally unacceptable and in that event we would take responsive measures to defend our workers and our industry," she said. Section 232 refers to a portion of a 1962 U.S. law that gives the president authority to impose tariffs in the name of "national security." 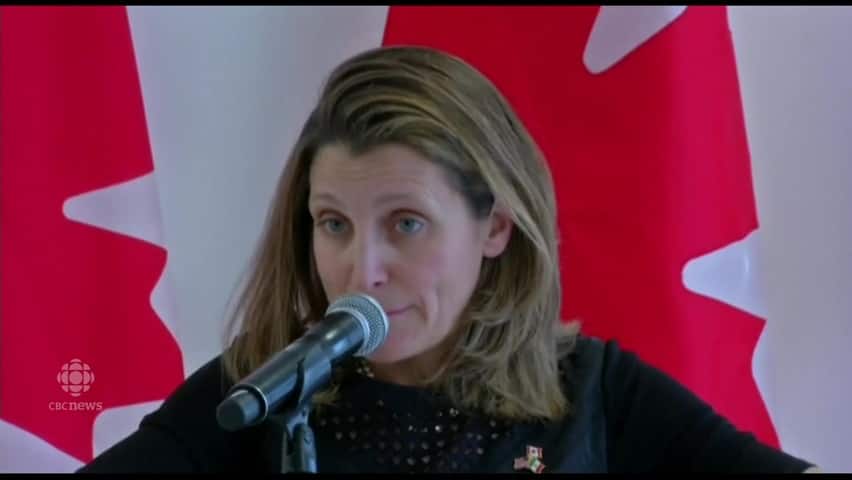 Freeland's message to the US

At the closing news conference, Freeland said "solid progress" has been made, but much work still lies ahead.

"This seventh round was a round which showed some really solid progress particularly on some of the bread and butter issues," Freeland later told reporters. "We made progress in closing some important chapters and on the harder issues ... There is certainly significant further work to be done on NAFTA but we made some solid progress here in Mexico City and we have a foundation upon which to build."

U.S. Trade Representative Robert Lighthizer was less sanguine, warning that time is running out for a deal and that, despite the hard work of officials, negotiators have not made as much progress as he had hoped.

Of the 30 chapters to be signed, only six have been closed today, including three from this latest round.

Freeland later told reporters that it is not unusual for trade negotiations to begin with the closing of only a few chapters, because many other chapters are being worked on. She insisted that progress is being made that will come together closer to the end of the talks.

Lighthizer also said the political climate could soon affect NAFTA negotiations. A presidential race is set to begin in Mexico next month, and mid-term elections in the U.S. and provincial elections in Ontario and Quebec will be held this year.

"All of this complicates our work. I fear that the longer we proceed, the more political headwinds we will feel," he said.

Trump said the U.S. has been ripped off by every country around the world, regardless of whether they are "friend or enemy."

While he did not show any signs of backing down or granting Canada an exemption, Trump said he does not foresee a trade war on the horizon.

Earlier Monday, the president took to Twitter to reiterate his view that NAFTA, which is undergoing contentious renegotiations, is a job-loser for the United States.

"We have large trade deficits with Mexico and Canada," he tweeted Monday morning. "Tariffs on steel and aluminum will only come off if new [and] fair NAFTA agreement is signed.

"Also Canada must treat our farmers much better. Highly restrictive. Mexico must do much more on stopping drugs from pouring into the U.S. They have not done what needs to be done. Millions of people addicted and dying."

Last week, Trump announced the imposition under the rarely-used 1962 law of a hefty new 25 per cent tariff on imports of steel and a 10 per cent tariff for aluminum, meant to boost U.S. manufacturers.

Canada has been seeking an exemption on the tariffs — a point Freeland mentioned again Monday.

"I did feel given the seriousness of the matter, that although these are separate negotiations and although ambassador Lighthizer is not the lead minister on this issue, I felt it was important to raise it," she said. "He was very responsive, he was very prepared to talk about it and I think we had a good conversation."

On Monday, Finance Minister Bill Morneau said Canada remains "firm" in its opposition to the tariffs and will wait for official news from the Trump administration before deciding how to react. But he said both countries stand to lose economically if the proposed tariffs are imposed.

"In fact we see it as a disadvantage, a disadvantage for American businesses," Morneau told reporters in Toronto at a post-budget event.

"We are extremely worried about the consequences of a trade war and are urging the White House to not advance with this plan. The new tax reform law has boosted the economy and we certainly don't want to jeopardize those gains," said AshLee Strong, a spokeswoman for Ryan, according to Reuters.

We have large trade deficits with Mexico and Canada. NAFTA, which is under renegotiation right now, has been a bad deal for U.S.A. Massive relocation of companies &amp; jobs. Tariffs on Steel and Aluminum will only come off if new &amp; fair NAFTA agreement is signed. Also, Canada must..

A Canadian government official, speaking on background, said Canada believes any new tariffs should not apply to this country due to the highly integrated nature of the North American steel market, and because of the close co-operation between the two countries on defence issues.

Foreign Affairs Minister Chrystia Freeland tweeted that she spoke with Rep. Kevin Brady, the Texan Republican who chairs the powerful ways and means committee, about the trade relationship between the two countries.

Brady has been one of the more vocal Republican opponents of the blanket tariffs.

The political leaders from Canada, the U.S. and Mexico who are overseeing the negotiating process meet today as the seventh round of NAFTA negotiations continue.

Plans are in the works to schedule an eighth round of talks in the U.S. in late March.

"There'll be an exemption procedure for particular cases where we need to have exemptions so business can move forward," Navarro said on CNN.

Commerce Secretary Wilbur Ross told NBC's Meet the Press that Trump could change his mind on the tariffs, but he didn't think he would. 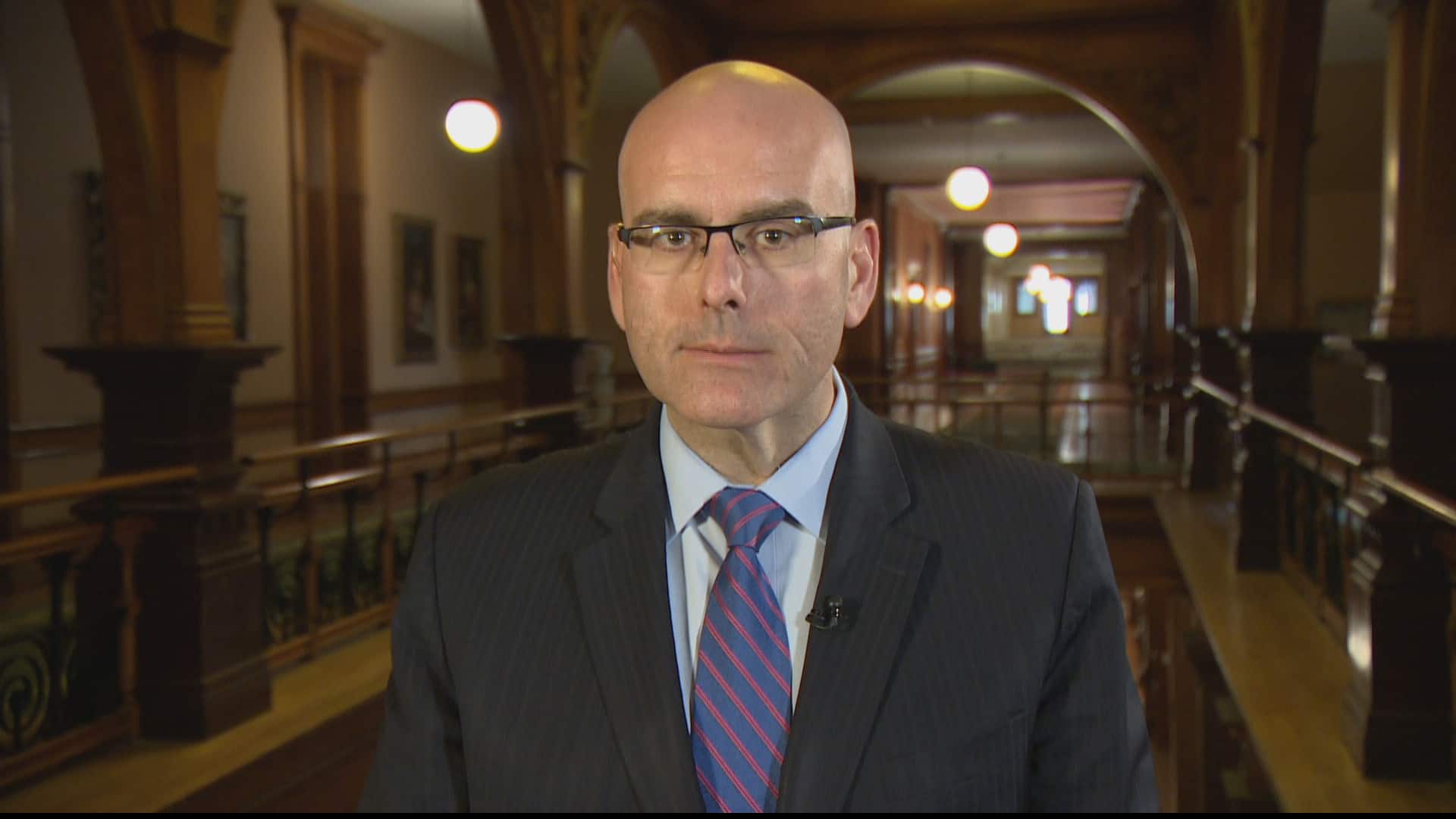 Is Ontario ready to take on Trump over steel tariff threats?

3 years agoVideo
6:51
'Ontario is very hopeful that Canada can get the exemption,' says Minister of Economic Development Steven Del Duca. 6:51

With files from Catharine Tunney and Peter Zimonjic