Jody Wilson-Raybould will give testimony before MPs on Wednesday but will not be able to speak freely because of constraints that still exist around what she can and can't talk about.

Jody Wilson-Raybould wrote to the chair of the justice committee Tuesday evening to say that while she will agree to give testimony before MPs on Wednesday, she will not be able to speak freely because of constraints that still exist around what she can and can't talk about.

The former justice minister had obtained a broad waiver from the Prime Minister's Office that allows her to disclose details of her conversations with government officials about the prosecution of SNC-Lavalin, a Montreal-based global engineering and construction company.

In an Order in Council (OIC) posted online Monday, the government said Wilson-Raybould — "and any persons who directly participated in discussions with her relating to the exercise of her authority under the Director of Public Prosecutions Act respecting the prosecution of SNC-Lavalin" — can report to the committee and to the federal ethics commissioner any cabinet confidences "in any information or communications that were directly discussed with her respecting the exercise of that authority while she held that office."

But in the letter to Anthony Housefather, Wilson-Raybould said those parameters will not allow her to "speak freely."

"The OIC addresses only my time as attorney general of Canada and therefore does nothing to release me from any restrictions that apply to communications while I served as minister of veterans affairs and in relation to my resignation from that post or my presentation to cabinet after I had resigned," she said in the letter.

"I mention this simply to alert the committee to the fact that the Order in Council leaves in place whatever restraints there are on my ability to speak freely about matters that occurred after I left the post of attorney general."

On Monday, Wilson-Raybould wrote the committee saying she is "anxious" to appear, and sought permission to deliver a 30-minute opening statement instead of the usual five to 10 minutes, a request which has been granted by the committee.

After the letter to Housefather was made public, a PMO official told CBC News that the core issue of the case revolves around whether or not Wilson-Raybould was pressured while attorney general of Canada on SNC-Lavalin. The PMO's position is that the order in council is broad enough for the former minister to deal with the issue in full. 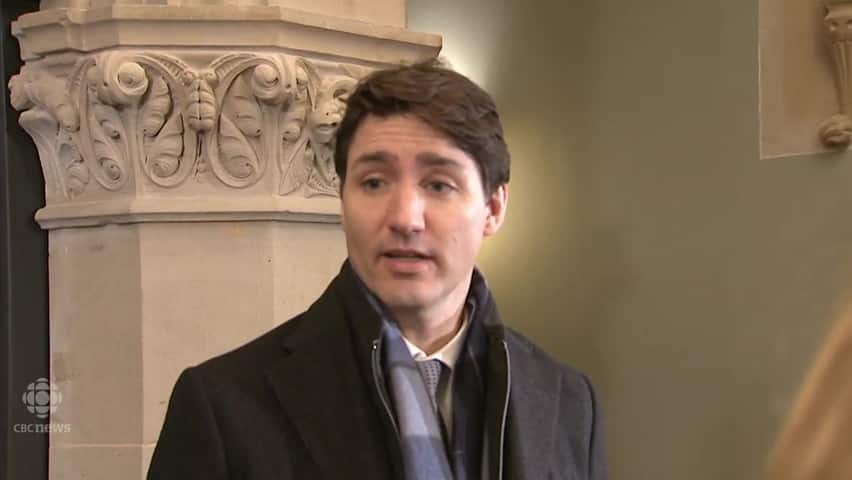 2 years ago
0:21
PM Justin Trudeau says that waiving privilege is something they take seriously, but he is glad that Jody Wilson-Raybould will be able to tell her side of things in front of the Justice Committee. 0:21

Earlier, Prime Minister Justin Trudeau said he's "pleased" that Wilson-Raybould will be able to "share her perspectives" on the SNC-Lavalin affair.

"It's important that people get an opportunity to testify, or share their point of view, at committee," Trudeau told reporters as he headed into the weekly Liberal cabinet meeting.

"As we said, waiving privilege, waiving cabinet confidentiality is something that we had to take very seriously, but I'm pleased that Ms. Wilson-Raybould is going to be able to share her perspectives." 2 years ago
0:32
Justice Minister David Lametti outlines discussions between both sides to waive solicitor client privilege in order for his predecessor to be able to appear in front of the Justice Committee. 0:32

The OIC waived cabinet confidence and solicitor-client privilege for Wilson-Raybould in her conversations with the justice committee and the ethics commissioner. The waiver does not cover communications between Wilson-Raybould and the director of public prosecutions — a limit imposed to "uphold the integrity of any criminal or civil proceedings," according to the text of the order.

"What we were doing is establishing a process that's fair and open and allows transparency but still protects the very principles that we want to protect in the legal system, as well as not interfering with ongoing litigation," he said.

Lametti confirmed there were "contacts" between lawyers, but would not say whether he was talking about discussions between government lawyers and Wilson-Raybould's counsel — retired Supreme Court justice Thomas Cromwell.

The justice committee is examining the growing controversy touched off by a Feb. 7 Globe and Mail report that said Trudeau's aides attempted to press Wilson-Raybould to intervene in the prosecution of SNC-Lavalin to help the company avoid criminal prosecution on bribery charges related to contracts in Libya. 2 years ago
6:56
'I anticipate tomorrow there may be some difficult rulings to make,' says Anthony Housefather. 6:56

Wilson-Raybould resigned from cabinet on Feb. 12, and has remained silent on the matter, insisting she's still bound by solicitor-client confidentiality from her time as attorney general.

"I understand fully that Canadians want to know the truth and want transparency," she told the House of Commons last week. "Privilege and confidentiality are not mine to waive, and I hope that I have the opportunity to speak my truth."

Housefather said he believes all of Wilson-Raybould's previous concerns have now been addressed and she will now have the opportunity to give her account of events.

"I think she now can tell her side of the story. With 30 minutes, I think she'll have ample time to do so and I look forward to hearing from her, as I know the other committee members do," he said.

Why did she resign?

Conservative justice critic and deputy leader Lisa Raitt will press Wilson-Raybould on what happened in various meetings and whether she engaged in any discussions that were, in her opinion, inappropriate. But she said the big unanswered question is what prompted Wilson-Raybould to resign.

"What was it either in what Mr. Lametti said, or in what the prime minister said, that caused her to realize she didn't have the confidence of the cabinet any longer and she had to remove herself from cabinet solidarity?" Raitt said. "Because that's what she did and it's a big deal."

NDP MP Nathan Cullen said Wilson-Raybould's testimony will be "pivotal" and the committee probe must expand to call on testimony from officials in the PMO, including Trudeau's chief of staff Katie Telford and his former principal secretary Gerry Butts.

"It's a typical scandal. First they deny anything's here, then they admit the thing happened but the thing's not important. Then one by one the accusations become verified, and we need to hear from the principal actors," he said.