Prime Minister Justin Trudeau visited a teepee on Parliament Hill that was erected as a symbol of the unresolved grievances many Indigenous people have as the country is set to celebrate its 150th anniversary.

Prime minister said he delivered 'a message of respect and reconciliation' 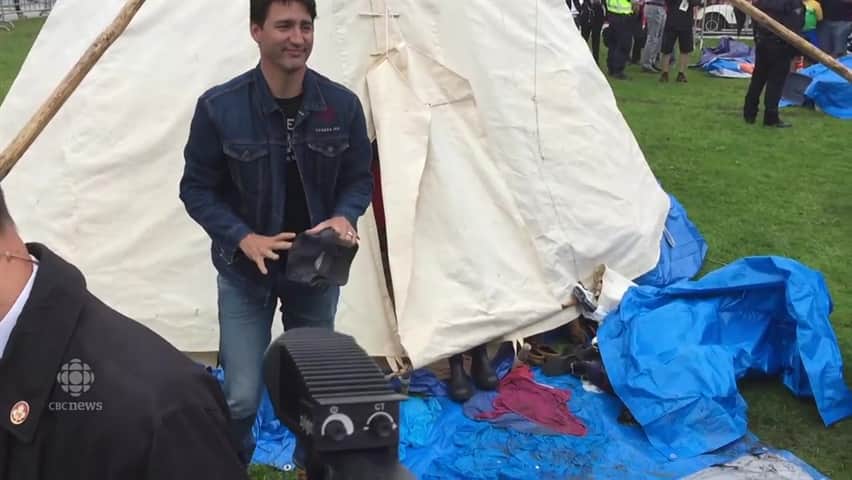 4 years agoVideo
0:38
Trudeau visited a teepee set up on Parliament Hill, a structure erected as a symbol of the unresolved grievances many Indigenous peoples have as the country is set to celebrate its 150th anniversary. 0:38

Prime Minister Justin Trudeau visited a teepee on Parliament Hill that was erected as a symbol of the unresolved grievances many Indigenous people have as the country is set to celebrate its 150th anniversary.

The teepee was moved Thursday night, with the help of the RCMP, from a spot on the edge of the parliamentary lawn to a more prominent location next to the main stage in front of Centre Block.

Mid-afternoon, other activists tried to build a second structure next to the teepee but were stopped by police, who confiscated their tent poles and stopped them from lighting a sacred fire on the grounds.

"Why won't they let us put up our community structure on Parliament? Anxiety? That's what it is: settler anxiety; because settlers know this is Indigenous land,"  Freddy Stoneypoint, one of the organizers, said after police stepped in.

"Indigenous nationhood was here before, and it's here right now."

The demonstrators are quite upset that their tent polls are being confiscated. <a href="https://t.co/D6ihRAcZFl">pic.twitter.com/D6ihRAcZFl</a>

Members of the Bawaating Water Protectors, who came to the capital from Sault Ste. Marie, Ont. to build the teepee, have said they are not engaging in protest, but rather a "reoccupation" of Parliament Hill, which is situated on the traditional territory of the Algonquin people.

These activists, like many other Indigenous people, say they have little reason to celebrate the country's history of colonialization, marked by land dispossession, Indian residential schools and forced assimilation.

Earlier Friday, Trudeau was seen wearing a jean jacket with the words "150 years young" emblazoned on the back as he entered the teepee. He was accompanied by his wife, Sophie Grégoire Trudeau.

The prime minister spent some 40 minutes with a handful of activists and left without speaking to media, saying only that his visit was "a message of respect and reconciliation."

"I'm overwhelmed right now," Candace Day Neveau, a spokeswoman for the water protectors, said after the meeting. "We let Justin know that we want to hold him accountable [on his promises]. We'll be coming back if we don't feel like we're being honoured, and we'll be exerting our inherent right to be here as Indigenous people."

Water protectors figure prominently in First Nations culture, and have been at the forefront of protests against natural resources development in this country.

Video from inside the teepee

Neveau later posted a nine-minute video of the conversation with the prime minister on her Facebook page.

She made it clear to Trudeau that their principal concerns are the continued imposition of the Indian Act on First Nations peoples and mismanagement at the department of Indigenous Affairs.

For decades, this document has dictated relations between the federal government and Indigenous peoples, while also setting parameters on who can register as a status Indian.

Trudeau told the activists that he is prepared to move Canada beyond "colonial structures." 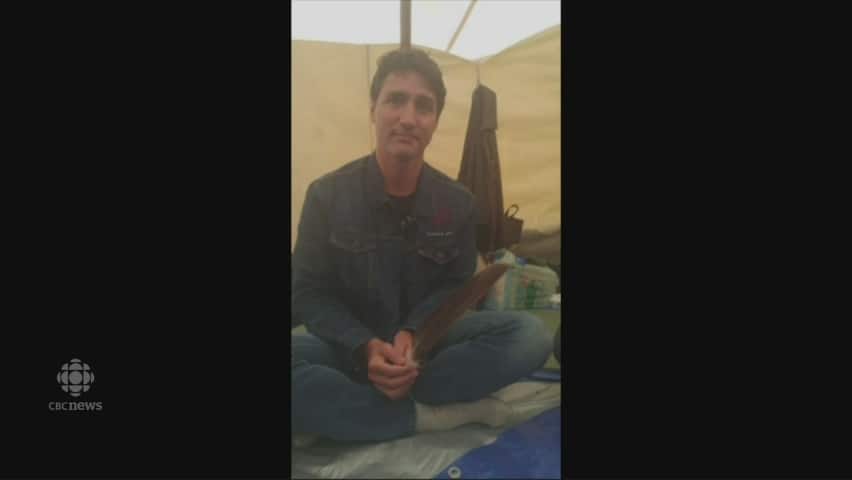 Video from Trudeau inside 'reoccupation' teepee

4 years agoVideo
2:32
Prime Minister Justin Trudeau told the activists that he is prepared to move Canada beyond "colonial structures" like the Indian Act. 2:32

'We are glad that he did come'

Trudeau also thanked the activists for "being these strong voices, for being courageous," while reiterating he was pleased that they could find a way to keep the teepee in place.

"We need to have a space for you," he said. "This is very visible, very present, and a counter balance to the narrative [of the 150 celebrations]."

"There was not a lot that he could promise outright," Ashley Courchene, a member of Sagkeeng First Nation, said of the talks.

"[But] I think that we are glad that he did come and say that what we did [building the teepee] is very, very important. He did bring up a good point that, at no time in the past have prime ministers met with somebody who is doing this. I commend the prime minister for coming and doing that."

On Thursday, when asked about the "reoccupiers," Trudeau said it was understandable that not all are celebrating equally.

"We recognize that over the past decades, generations, indeed centuries, Canada has failed Indigenous peoples," Trudeau said.

The group intends to perform Indigenous ceremonies all weekend, and will be at the centre of celebrations that are expected to draw some 500,000 people to Ottawa's downtown core.

RCMP officers searched the teepee before the prime minister entered.

Inside the tent, Trudeau thanked activists for understanding the role security forces have to play in protecting the Canada Day festivities. 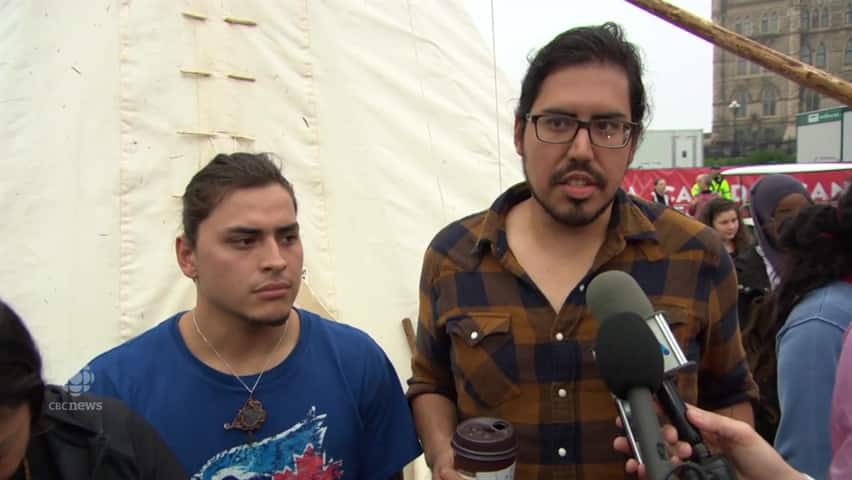 'We want to hold him accountable,' Indigenous activists say after meeting PM