Prime Minister Justin Trudeau has delivered a thinly veiled rebuke to the Trump administration and Israel over their opposition to the Iran nuclear deal, setting the stage for a divisive G7 summit next month.

Prime Minister Justin Trudeau has delivered a thinly veiled rebuke to the Trump administration and Israel over their opposition to the Iran nuclear deal, setting the stage for a divisive G7 summit next month.

Trudeau said he regrets President Donald Trump's decision to withdraw the United States from the 2015 agreement that was negotiated by the world's major powers.

"We will respect the capacity of individual countries to make their decisions about foreign policy," Trudeau said Wednesday.

"But for Canada's purpose, we make our decisions around foreign policy here in Ottawa, not in Washington, not elsewhere." 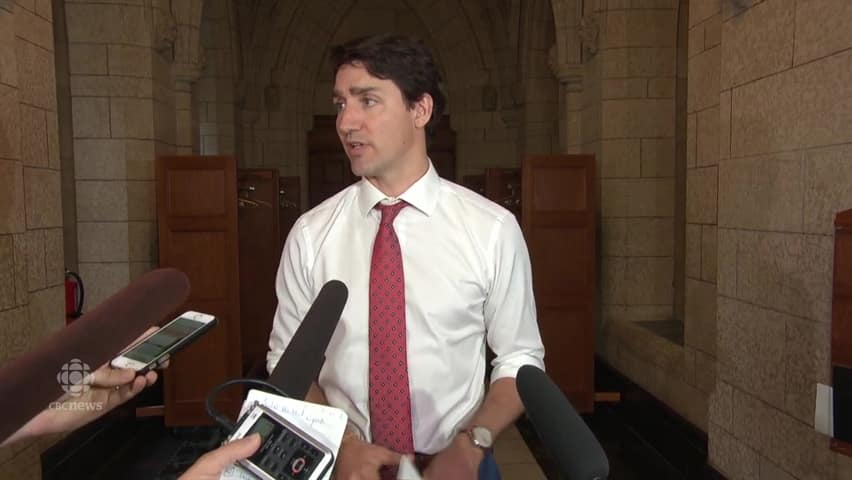 3 years agoVideo
1:09
The Prime Minister spoke to reporters Wednesday as he arrived for his weekly caucus meeting 1:09

Last week, a senior Israeli intelligence official was in Ottawa to garner support for his government's opposition to the Iran agreement.

Chagai Tzuriel, director general of Israel's Ministry of Intelligence, told The Canadian Press that he was seeking support from Canada and Western countries for either cancelling or strengthening a deal that his government views as flawed and ultimately ineffective in stopping Iran's pursuit of nuclear weapons.

There was no direct evidence in Netanyahu's presentation that Iran violated the deal after signing it.

On Wednesday, Trudeau said the Iran nuclear deal wasn't perfect, but it helped prevent that country from developing a nuclear weapon.

Trudeau also stressed Canada is firmly aligned with most countries, including other NATO allies in supporting the deal, formally known as the Joint Comprehensive Plan of Action.

"We know that standing firmly in support of the JPCOA with our NATO allies and others is extremely important."

Upcoming discussions at the G7

The prime minister said he expects the Iran decision to be a topic of discussion when he hosts Trump and their G7 counterparts in Quebec at their annual summit next month.

It is clearly shaping up as a discussion that will expose a major cleavage between the U.S. and its G7 partners.

The major European countries, China and Russia are all continuing to express their support for the agreement following Trump's decision to end U.S participation and restore sanctions against Iran.

German Chancellor Angela Merkel says the decision underscores the need for Europe to take increasing responsibility for peace and security, similar to the message she delivered after Trump's debut at last year's G7 summit.

Six countries, including the U.S. negotiated the deal: the five permanent members of the United Nations Security Council —the U.S., Britain, France, China and Russia — as well as Germany.

Merkel said in a speech that Germany remains committed to the agreement and will try to do everything it can to ensure Iran fulfills its future commitments.

British Foreign Secretary Boris Johnson told his Parliament that Britain will continue to respect the deal as long as international inspectors can verify Iran's compliance.

EU Commission President Jean-Claude Juncker said in a speech to a Belgian regional parliament that Trump's decision shows the U.S. "no longer wants to co-operate with other parts in the world."

"At this point, we have to replace the United States, which as an international actor has lost vigour, and because of it, in the long term, influence," he said.

The EU is also a full-fledged G7 member.