Asked about Trump, Trudeau promises to stand for feminism and diversity

While maintaining that his priority in dealing with the Donald Trump administration will be the Canadian economy, Prime Minister Justin Trudeau told an audience on Thursday night that he would never shy away from proclaiming himself a feminist, defending immigration or extolling the contribution of Muslim Canadians.

On cross-Canada tour, PM maintains focus on economic ties but notes his own principles

While maintaining that his priority in dealing with the Donald Trump administration will be the Canadian economy, Prime Minister Justin Trudeau said Thursday night he would never shy away from proclaiming himself a feminist, defending immigration or extolling the contribution of Muslim Canadians.

During a town hall forum in Belleville, Ont., Trudeau was asked about how a Trump presidency would impact Canada's relations with the United States. Trudeau joked that everyone in the audience leaned forward when the question was asked.

As he has in the past, Trudeau focused first on the economic ties between the two countries. He said the Liberal government emphasized those links in their initial discussions with the new administration.

"Canadians expect their government to have a constructive working relationship with the incoming American administration, and that's exactly what we're going to do," he said.

"We're going to make sure that we are fighting for Canadian jobs, Canadian economic growth, for opportunities for Canadians as it regards both our relations with the United States and indeed with the world."

But Trudeau also enumerated his own principles.

"At the same time, Canada is a separate country from the United States and there are things that we hold dear that the Americans haven't prioritized," he said.

'Immigration is a source of strength'

"And I'm never going to shy away from standing up for what I believe in — whether it's proclaiming loudly to the world that I am a feminist, whether it's understanding that immigration is a source of strength for us and Muslim Canadians are an essential part of the success of our country today and into the future." 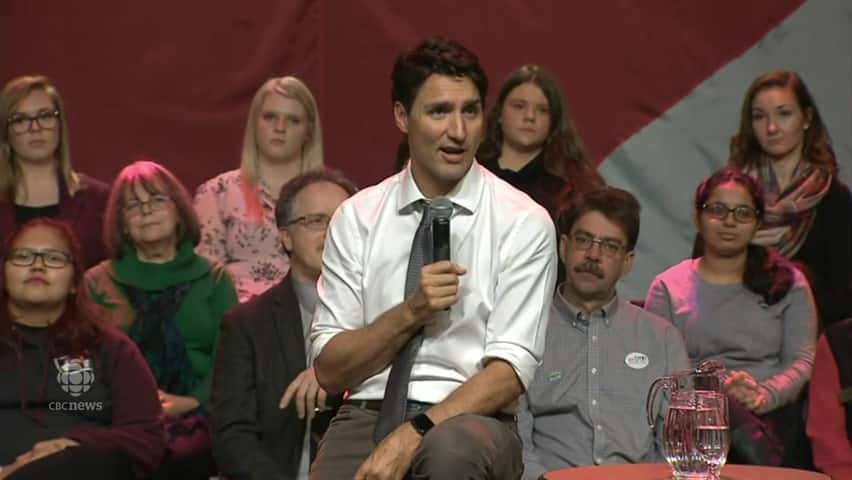 4 years ago
1:25
"I'm never going to shy away from standing up for what I believe in," Trudeau tells Belleville town hall. 1:25

Trump has been criticized for his comments regarding women and once suggested a ban on Muslim immigration to the United States.

Trudeau followed those comments by returning to his economic focus.

"But these are issues that are things we can have discussions on and respectful disagreements on with our neighbours to the south, if indeed we have to have disagreements on them," he said.

"But every step of the way our focus is on making sure that Canadian businesses, Canadians and their families have good jobs, have economic growth, have opportunities."

The prime minister said his government would work with Trump in a "thoughtful and constructive way" and stress the economic benefits for both countries when they work well together.