Trudeau government will insist on ultimate authority over fate of pipeline in B.C.-Alberta spat: source

As the governments of Alberta and British Columbia clash over oil and wine, federal officials are carrying a forceful message in their discussions with the two provinces.

Liberals seek to 'bring the temperature down' as B.C. move against bitumen prompts Alberta ban on B.C. wine

As the governments of Alberta and British Columbia clash over oil and wine, federal officials are carrying a forceful message in their discussions with the two provinces.

"The key message [is] that we want to help bring the temperature down," a senior Liberal, speaking on condition of anonymity, told CBC News, "but ultimately the federal government will not allow any province to impinge on its jurisdiction over the national interest. Full stop."

"The appropriate departments are working with both provinces to find solutions," Infrastructure Minister Amarjeet Sohi, who represents an Edmonton riding, told reporters on Wednesday.

What might solve this stand-off remains to be seen, but Trudeau has already said that building the Trans Mountain pipeline is in the national interest.

"We have a federal government to look out for the national interest above various disagreements within the provinces and we did exactly that on the Trans Mountain pipeline," he said in an interview last week with CBC Radio's Edmonton AM.

"We're just going to reiterate that the decision we made was in the national interest and we're going to move forward with that decision, which means we're going to get the Trans Mountain pipeline built."

Trudeau repeated that position during a town-hall forum in Nanaimo, B.C. last week. 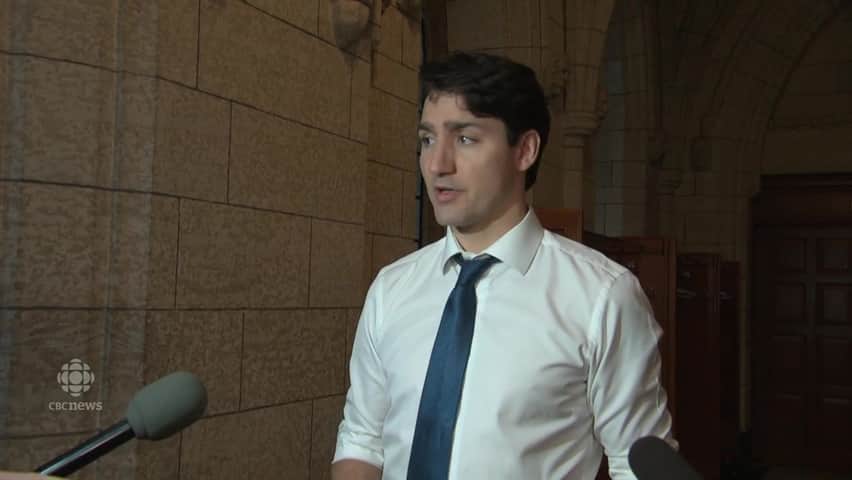 3 years agoVideo
1:07
Justin Trudeau says he will continue to engage with Alberta and B.C. in their spat over the Trans Mountain pipeline expansion. 1:07

A fight over bitumen and wine

The current escalation of tensions between the NDP premiers of Alberta and B.C. began when Horgan's government announced that it would restrict shipments of diluted bitumen — the "dillbit" oil that would be transported from Alberta via the Trans Mountain pipeline — until an independent advisory panel could study the possible impacts of a spill.

With the pipeline already approved by federal regulators, Alberta's Notley accused Horgan of "grasping at straws" in an attempt to obstruct the project. She responded first by suspending negotiations to purchase hydro power from British Columbia. Then, on Tuesday, Notley went further, announcing that her government would block the import of B.C. wines into Alberta.

Eric Adams, a law professor at the University of Alberta, says a move by B.C. to restrict the shipment of diluted bitumen could be found by a court to be unconstitutional.

Though the B.C. government has the right to enact environmental regulations within its provincial jurisdiction, a court would be able to consider whether the restriction was intended to obstruct a federal project. A court could also find that the Trans Mountain pipeline, as an inter-provincial project under federal jurisdiction, can be excluded from provincial law. 3 years agoVideo
1:21
Conservative Leader Andrew Scheer says PM Justin Trudeau has let the pipeline battle between Alberta and BC go on too long. Scheer says that while NAFTA is important, Trudeau should return from his trip to the U-S to fix the mess. 1:21

For now though, the federal Liberals are not looking to refer the matter to the courts. The Trudeau government believes that in the absence of a draft regulation from the B.C. government, a judicial reference would be unlikely to produce a clear ruling.

Speaking to reporters in Victoria, Horgan said his government has the right to "consult with British Columbians about putting in place protections for our environment and our economy."

But Adams also believes that Alberta's ban on B.C. wine could be an unconstitutional limit on the "free flow of trade" between provinces.

"We have been a strong advocate for freer trade across Canada in all goods, including alcohol," Innovation Minister Navdeep Bains said in a statement on Thursday. "We urge governments to avoid taking steps that diminish trade and call on parties to work quickly to resolve this issue.‎"

Federal Conservative leader Andrew Scheer blamed Trudeau for the situation and called on the Prime Minister to cancel his visit to the United States this week.

"This is not a disagreement between two provinces. This is about a lack of leadership by the federal government," Scheer told reporters on Parliament Hill.

"I'm calling on Justin Trudeau to take control of the situation, to come back to Canada, instead of being in the United States this week, as this crisis develops."

Trudeau is visiting Chicago, San Francisco and Los Angeles this week to promote Canada's position on NAFTA and meet with American investors.

NDP leader Jagmeet Singh said the premiers, both New Democrats, are doing exactly what they promised to do in defending their provinces' interests. Like Scheer, Singh blamed Trudeau, suggesting that if Trans Mountain had been submitted to a reform process for environmental assessment, the current dispute would have been avoided. 3 years agoVideo
8:14
Alberta Premier Rachel Notley says the B.C. NDP can represent their folks by objecting to the Trans Mountain pipeline project within the rule of law - not by "flagrantly thumbing" its nose at it. 8:14
CBC's Journalistic Standards and Practices|About CBC News