Prime Minister Justin Trudeau swings into Quebec City for the second leg of his cross-country town hall tour, fielding questions on the state of Canada's immigration system and how to combat racism as members of a far-right group look on.

Prime Minister Justin Trudeau swung into Quebec City for the second leg of his cross-country town hall tour Thursday, fielding questions on the state of Canada's immigration system and how to combat racism as members of a far-right group looked on.

In the crowd at École secondaire De Rochebelle were about 10 members of the Storm Alliance — a group that identifies as "ultranationalist" but which claims to eschew ties to far-right white nationalists.

Members of the group have staged a series of protests across Quebec in recent months against the Liberal government's immigration policies, raising concerns about an influx of Muslims.

Storm Alliance, and other far-right groups, have said the federal government is too tolerant of the cultural practices of minorities and that they consider multiculturalism to be "collective suicide."

Roughly seven members of the RCMP stood between the Storm Alliance, who positioned themselves at the back of the room, and other members of the audience who sat around the prime minister.

Dave Tregget, the group's leader, was seen snapping a selfie before the event began. The group wore black hoodies with the initials "SA" on their chests and matching toques. The group watched the town hall peacefully as Trudeau studiously avoided picking them for a question.

Trudeau was briefly interrupted by a heckler — the same man who had also disrupted, and was removed from, his town hall in London, Ont. last week. He unfurled a Canadian flag that was defaced with Nazi symbolism and the words "evil empire" and "fig leaf."

The man was quickly escorted out of the room by police officers. There was no apparent connection between the disruption and Storm Alliance.

Trudeau, tongue planted firmly in cheek, said "Nice to see you again," as the man was hauled off.

One woman in the audience, troubled by the sight of the swastika symbol, asked the prime minister what more can be done to fight racism.

Trudeau said he remembers being in the same city a year ago this month, in the wake of the Ste-Foy mosque shooting, when he saw thousands of Quebecers take to the streets to oppose such an act of hate. He said Quebecers are open and generous people.

"We must show, in a tangible way, that our country's success is even greater if we embrace our diversity, and that's a lesson that the world has to learn if we're going to get through the 21st century," he said.

"I think people are concerned about their identity, about the security of our country. Overall I thought the answers were pretty good. There were a few different opinions, but I think the prime minister was able to juggle the different opinions and bring consensus," she said.

But someone else in the crowd was looking for more. Juan Carlos Higuerey-Custodio told Trudeau that since his family arrived in Quebec from Venezuela, they haven't been able to get work. He asked the prime minister what's being done to help newcomers get hired.

"He didn't actually answer it. He just said, 'Oh yeah, we're working on that. There are opportunities, you just need to wait. They're gonna come,'" Higuerey-Custodio told CBC after the event. "I see my mom struggling, my dad struggling, my sister struggling. It's important for me to feel supported by the prime minister, knowing that he was actually doing something at the moment to know that there's a problem and he needs to fix it. That would give me some hope." 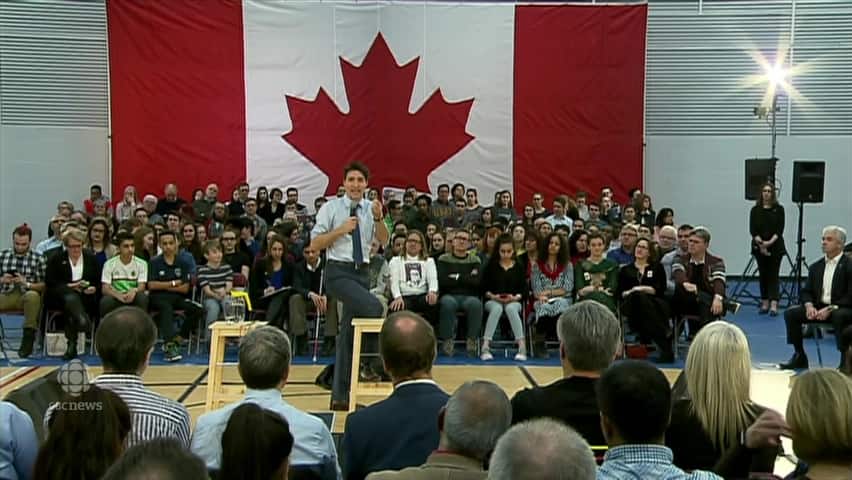 3 years agoVideo
1:21
Prime Minister Justin Trudeau explains why he does not want to reopen the constitution while fielding questions at a town hall event in Quebec. 1:21

One woman asked Trudeau if he thought it was time to finally secure Quebec's signature on the Canadian Constitution, an old sticking point in a province that rebuffed Prime Minister Pierre Trudeau's overtures in 1982. She asked if it was time to put the "debate to bed" after some 35 years, and jump-start constitutional negotiations.

Trudeau, who has previously said he has no intention of holding such talks during his mandate, again rejected the suggestion.

"The political energy that would have to be deployed and the conversations to which this would lead and all of the constitutional debates that would absorb all of the political oxygen within our system for several years, from my point of view… perhaps it's better to take that same energy and oxygen and deploy it to deal with issues that are of concern to citizens on a daily basis rather than deal with the Canadian constitution," he said in French.

Halfway through the event, the prime minister fielded a question from a Syrian refugee, who came to Canada under the Liberal government's resettlement program. While grateful to be in his new country, the man said he strongly opposes the country's embrace of medical-assistance in dying. Others asked about local issues, including repairs to the Pont de Quebec and layoffs at the Davie Shipyard.

Other questions were similar to those asked at stops in English Canada, including pleas for the prime minister to do more to help immigrants with foreign credentials find work in their field in Canada. 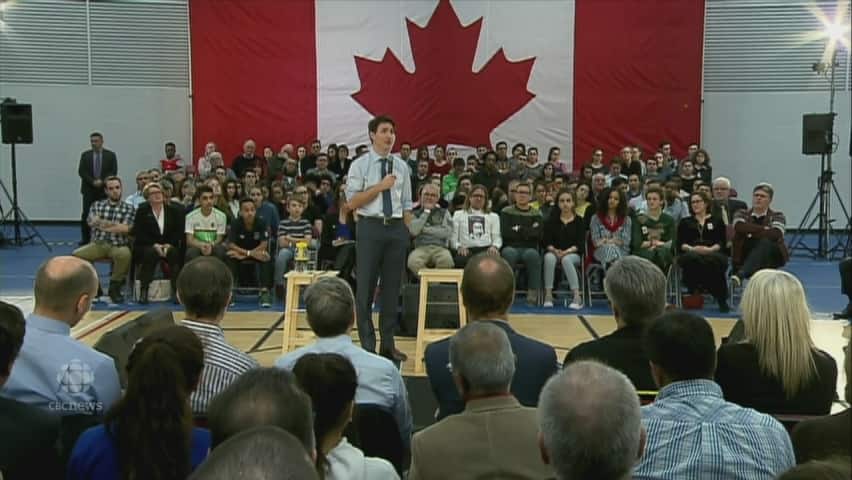 Another questioner, a public servant at Environment and Climate Change Canada, asked the prime minister to do more to help fix the disastrous Phoenix pay system that has mangled the paychques of tens of thousands of federal government workers. Trudeau said the former Conservative government was to blame for the system's sorry state, but pledged more money to resolve the nearly two-year old problem.

The prime minister was also forced to defend his record on electoral reform. Trudeau said he couldn't agree to a proportional representation system — one of his key campaign promises in 2015 — as he feared it would be bad the for the country, fostering small, one-issue parties on the federal scene who would wield too much power to the detriment of big tent, national parties.

Trudeau embarked on a similar tour last year in an effort to leave the "Ottawa bubble" — a nickname often assigned to the parliamentary precinct that is populated by politicians, the media, lobbyists and other stakeholder groups — and hear what concerns regular Canadians as the Liberal government readies for the last two years of its mandate.

While Liberal organizers have touted the event as a chance to talk about the economy, a friendly subject for the prime minister as Canada enjoys a booming economy with low unemployment rates not seen in a generation, questions have been wide-ranging including a number about Indigenous affairs, the $10.5 million payment to Omar Khadr, concerns about the state of Canada's immigration system, and how best to support women in the workforce.

The events have been interrupted by hecklers, some concerned about the Khadr payment, with others worried about the passage of M-103, a non-binding motion passed by the Commons last year that condemns Islamophobia, and the return of ISIS fighters.

Trudeau made a stop in Quebec last year — in the bilingual Eastern Townships — but he answered only nine French questions. Quebec City is overwhelmingly francophone and typically returns federalist politicians; it is an area where the Liberals made major inroads in the last election to the detriment of the Conservatives and NDP. All of the questions Thursday evening were in French, and simultaneous translation was provided.

Trudeau will also make stops in Winnipeg and Edmonton later this month before parliament's return on Jan. 29.

With files from the CBC's Angelica Montgomery