Prime Minister Justin Trudeau kicked off a tour to connect with Canadians as controversies brew over political fundraising and a vacation at the Bahamian island property of the Aga Khan.

Prime Minister Justin Trudeau kicked off a cross-country tour on Thursday to connect with Canadians as controversies brew over so-called cash-for-access political fundraising and a vacation at the Bahamian island property of the Aga Khan.

His campaign-style trip began in eastern Ontario, with stops at a restaurant in Manotick, an aquarium in Brockville and a highway rest stop in Mallorytown.

At each stop, he shook hands, chatted and posed for photos. While in transit, he called a radio station in Kingston and requested a song by the Tragically Hip.

​At a forum attended by approximately 250 people in Kingston in the afternoon, there was no mention of the ethics controversies that have followed Trudeau's government, but he was challenged on several fronts.

In the space of an hour, Trudeau took questions about the welfare of Indigenous Canadians, military exports, subsidies for the fossil-fuel industry, real-estate regulation and support for the manufacturing sector.

Asked about electoral reform, Trudeau acknowledged he has taken the position that a ranked ballot is the best option for Canada, but, he added, "I have showed consistently that I'm open to a broad range of perspectives and views."

An Indigenous woman became emotional while asking the prime minister to protect Canadian waters from environmental harm. "Please, from the bottom of my heart, and my grandchildren, please keep our water clean," she said.

Another woman seemed to choke up as she criticized the Liberal government's handling of benefits for veterans.

"You promised the injured veterans you would restore the lifetime disability pension," she said. "So when are you going to be restoring these lifelong disability pensions for our injured? And stop pursuing this in court as [you promised]?" she asked.

"We're going to continue to work on keeping not just an electoral promise we made to Canadians, but a promise and commitment that every government makes to the parents and the families of young men and women who sign up for our forces."

The woman later stood up and complained the prime minister had not answered her questions. 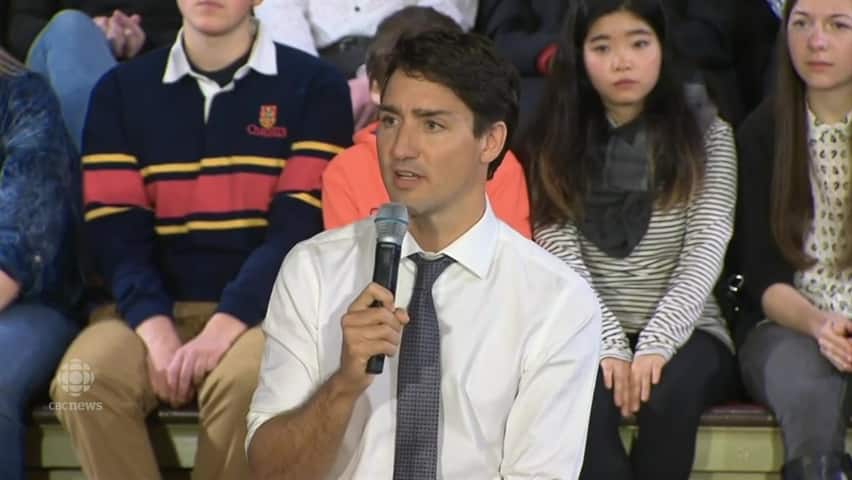 4 years ago
2:11
While in Kingston, Ontario, PM Justin Trudeau is asked when he is going to honour his promise to restore the lifelong disability pensions for injured veterans. 2:11

Public concerns were sometimes loudly expressed. Two people who said they were members of the civil service complained to the prime minister about the Phoenix pay system that is leaving some people unpaid.

"We're being told that it could take up to three years to fix this problem and no offence, that's not acceptable," said a corrections worker. "If a private corporation were doing this on the scale that this is happening, the government would have taken action by now. This is not right."

Trudeau said he agreed that the payroll problems were "unacceptable."

"I'll admit it: this government, in everything that we were doing in the first months, didn't pay proper attention to the real — didn't pay enough attention — to the warning signs that were coming on the transition [to Phoenix] that we were overseeing," Trudeau said.

"We are working extremely hard to try and fix this. We're down to 8,000 cases that are still 8,000 cases too many," Trudeau said, but he was later challenged on that number by one of the civil servants, who called it a "lie by misdirection" and noted it only represents the backlog of cases registered before July 1. 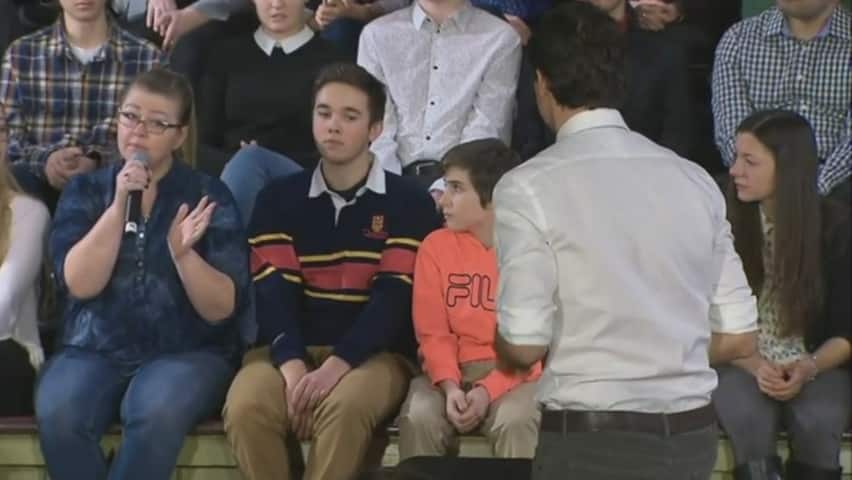 4 years ago
3:45
PM Justin Trudeau is asked about the problems with the government's Phoenix pay system, then corrected on his answer about the remaining cases. 3:45

Later, in Belleville, the prime minister took another dozen questions from a crowd of several hundred. Topics included the impending U.S. presidency of Donald Trump.

The Ontario swing continues Friday and ends in London.

The prime minister will continue to other provinces afterwards and then join his cabinet for meetings in Calgary.

"Part of this tour is demonstrating a level of openness and accessibility that I campaigned on and that Canadians want to see from their government. We are listening to everyone," Trudeau told reporters after the forum in Kingston, responding to a question about the fundraising controversy. "And that is what Canadians expect."

Public invited to RSVP, not required

Liberal MPs invited those wishing to attend to RSVP through the MPs' websites, raising questions about whether the information would be used by the Liberal party for political purposes.

But a spokesman for the prime minister said signing up on the websites was not required in order to attend, and was intended to ensure attendees received any updates with details of the events.

"We wanted to ensure that attendance at these events would not be simply be limited to partisans or Liberals. In order to do so, MPs took the opportunity to reach out to all their constituents — regardless of political affiliation — and share information on upcoming events," Cameron Ahmad told CBC.

Notice of one event was posted on the Liberal party's website, but a party spokesman later said that was a mistake and the posting had been deleted.

Trudeau has recently faced a barrage of questions and criticism over "cash-for-access" fundraising events, where wealthy donors were given access to the prime minister at exclusive events.

A new ethics controversy involves Trudeau's family vacation to the Bahamas, where he stayed at the Bell Island home of the Aga Khan, whose foundation receives millions of dollars in federal funding for development projects.

Speaking to reporters, Trudeau said he flew to the island in the Aga Khan's private helicopter, raising new questions about the event. 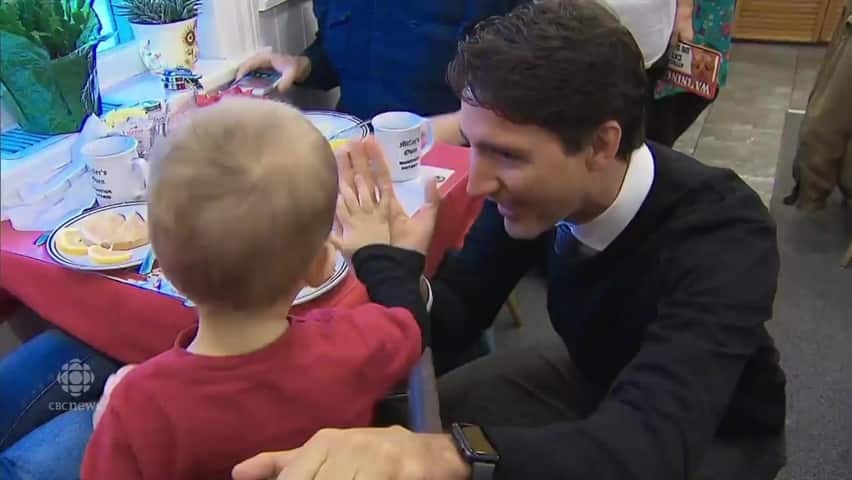 4 years ago
3:09
PM Justin Trudeau began a cross country tour to meet and listen to ordinary Canadians with a stop at Miller's Oven in Manotick, just outside of Ottawa. 3:09
CBC's Journalistic Standards and Practices|About CBC News