The grim shadow of world events descended over a UN conference on refugees on Monday as Prime Minister Justin Trudeau and other world leaders gathered to make new commitments to victims of a historic migration crisis.

The grim shadow of world events descended over a UN conference on refugees on Monday as Prime Minister Justin Trudeau and other world leaders gathered to make new commitments to victims of a historic migration crisis.

News crept in from nearby and abroad to underscore the oft-stated point at the summit that work on refugees remains a task in progress. As the prime minister spoke, word filtered out about a bombing ending Syria's ceasefire.

While the war made new victims, the debate closer to the New York conference revolved around whether to show them any hospitality. A series of attempted bombings in the city added new fuel to a combustible U.S. election debate on Muslim migration.

Trudeau got applause from delegates to the United Nations conference when he mentioned Canada's acceptance of almost 31,000 refugees. A CNN anchor moderating another event quoted Trudeau welcoming refugees at the airport. He didn't let the applause linger long.

'Must not stop at resettlement'

"While that is a great story, I don't want to lose sight of the fact that Canada's engagement must not stop at resettlement," Trudeau said.

"Now is the time for each of us to consider what more we can contribute. So, in Canada, we're looking at our options." 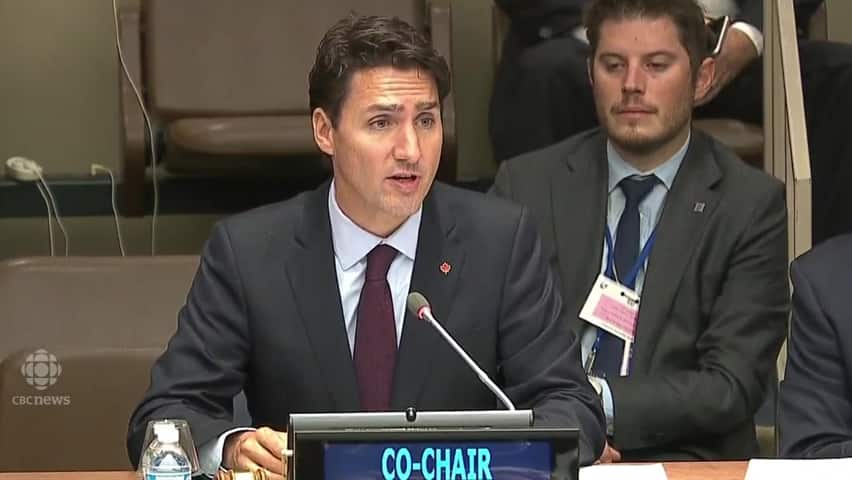 4 years ago
1:47
Prime Minister Justin Trudeau co-chaired the UN meeting on refugees and migrants while the Government of Canada announces that it will increase humanitarian assistance this fiscal year by 10 percent. 1:47

He announced Canada would spend an additional $64.5 million over the next several years to support people affected by humanitarian crises around the world, and increase its foreign-aid budget by 10 per cent to help displaced children get back to school.

The challenge was illustrated by the woman seated beside him. In Jordan, the unofficial population count is now almost 10 per cent Syrian refugees: "Will we leave refugees to languish in camps ... and slums?" said Queen Rania, who co-chaired one of the discussion sessions with Trudeau.

She said the goodwill presently exhibited by countries is no match for the task.

Continents away, the sound of explosions echoed the point that Syria's five-year civil war will produce more casualties. An NBC News crew reported hearing more than 100 thuds, bangs and blasts around Aleppo, which has become the focal point of a conflict that has killed an estimated 470,000 people and sent almost five million fleeing abroad.

Other reports described an aid convoy being obliterated by missiles.

The world's wealthiest country has taken in fewer refugees than most western nations — 10,000 so far.

However, her opponent savaged the idea Monday.

Donald Trump responded to the latest news from a New York bomb plot by turning to the refugee issue. An Afghan-born immigrant was arrested Monday after a firefight with police, suspected of planting bombs in New York and New Jersey over the weekend.

Trump wants to halt migration from Muslim countries. That includes refugees from Syria. He said the country had shown weakness by letting in thousands of people — and vowed to stop it.

He likened it to a tumour.

"This is cancer from within," Trump told Fox News. "We can't let any more people come into this country... This is gonna be like the Trojan horse. ... And you know they stay together. They keep plotting."

Trump appeared to call for racial profiling in that interview, saluting Israel for doing it. He also promised to get tougher to end the fight against the Islamic State of Iraq and Syria (ISIS) — although he offered no specifics when repeatedly pressed.

Some refugees described their experiences in a Washington think-tank event last week. One described Lebanon as a failing state, buckling under the pressure of dealing with a refugee influx that has almost doubled its population.

Rouba Mhaissen said refugees are suffering in different ways. She said children aren't going to school, teens in camps are grappling with suicidal thoughts, women are being abused by men who haven't worked in years and don't have legal permission to do so.

"We're not able to love or live normally," she told the Wilson Center event.

Another woman at the event had to stop speaking as she described a city whose population is now zero. Her voice quivering, Maria Al Abdeh said the last residents to evacuate made one final stop on the way out: at the cemetery, to say goodbye to their dead.