Trudeau's challenge to Singh on Quebec's Bill 21 has risks

Trudeau's debate gambit stirred echoes of a pivotal break between the Liberals and NDP in 2015 — and put new pressure on Singh to defend his own stance. But the exchange on Monday night also underlined how much more complicated things are for Trudeau in 2019.

How Monday night's debate echoed the niqab dispute of 2015

Going into Monday night's debate, there was a small, but potentially significant, difference between Liberal leader Justin Trudeau and NDP leader Jagmeet Singh on the question of what, if anything, the federal government should do about Quebec's Bill 21, legislation that bans the wearing of religious clothing by members of the province's public service.

But there was no small amount of risk in Trudeau deciding to put that to Singh directly and publicly on the federal campaign's grandest stage.

Trudeau's debate gambit stirred echoes of a pivotal break between the Liberals and NDP in 2015 — and put rare pressure on Singh to defend one of his own positions.

But the exchange on Monday night also underlined how much more complicated things are for Trudeau in 2019.

"Mr. Singh, you have spoken very eloquently about discrimination and fought against it all your life," Trudeau said on Monday when the time arrived for him and the NDP leader to discuss the Quebec bill. "And that's why it's so surprising to have heard you say, like every other leader on this stage, that a federal government under you would not intervene in the question of Bill 21 in Quebec."

Singh has, at least, not shown much interest in the possibility of intervening.

In an interview with CBC's Power & Politics last month, for instance, the NDP leader emphasized a desire to persuade Quebecers through his presence and outreach.

Under repeated questioning during his Face to Face session with the CBC News's Rosemary Barton, Singh eventually allowed that federal court action was "always going to be an option that remains open," but added that he did not want to "interfere" in the existing legal challenges at Quebec's Superior Court.

The federal government's options for getting involved are limited. In the most likely scenario, the federal Department of Justice would ask a court to grant it intervenor status in an existing case, allowing federal lawyers to present arguments against Bill 21. 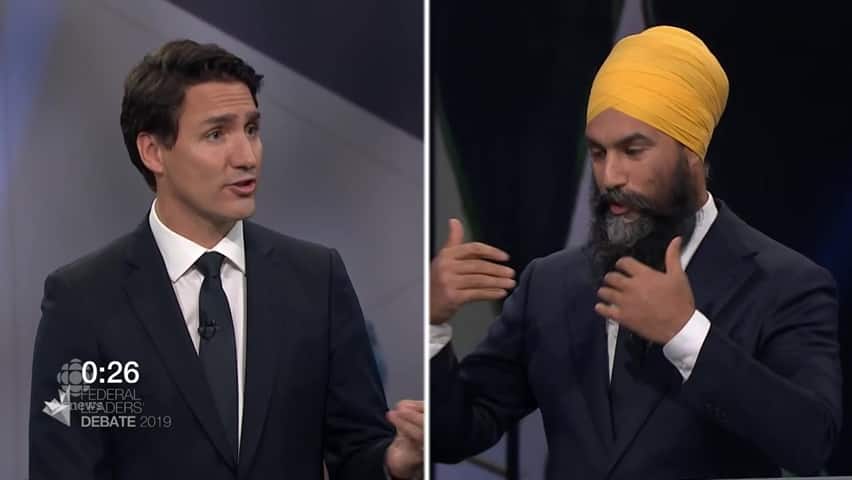 Trudeau to Singh: Why close the door to intervention on Bill 21?

That might mean he believes it would be better to let Quebecers deal with the matter amongst themselves at this stage, keeping in mind that quick federal involvement might only exacerbate tensions in Quebec.

A clearer moment to intervene might appear if the case advances to another level of the judicial system.

"It's a question where, yes, it's awkward politically because ... it's very popular," Trudeau continued. "But I'm the only one on this stage who has said, yes, a federal government might have to intervene on this."

"Might" is a wobbly word on which to build a principled stand. But Trudeau was giving it a shot.

Simply suggesting that he might do something isn't a lot. But it is slightly more than the competing proposals to refrain from any action.

"So why not act on your convictions and leave the door open to challenging it?" Trudeau asked.

This could have gone much worse for Trudeau.

Consider that Trudeau was challenging Singh, the first visible-minority leader of a federal party, on a question of rights and discrimination just three weeks after apologizing for having dressed up in blackface. 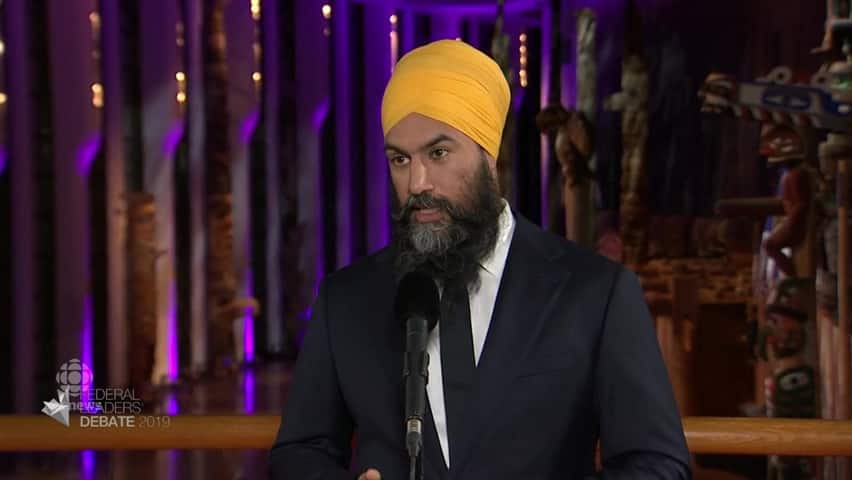 1 year agoVideo
1:09
Taking questions from reporters Monday following the English language debate, NDP Leader Jagmeet Singh said that if he’s elected prime minister, he'll have to get involved in the debate over Bill 21 if it makes it all the way up to the Supreme Court. 1:09

Singh could have aggressively put that right back to Trudeau. In boxing terms, Trudeau's chin was exposed. But Singh didn't take the opportunity.

By Tuesday morning, Singh had found a tougher response — "I don't take any lesson from someone who's got a track record like Mr. Trudeau when it comes to fighting discrimination" — but by then reporters were more interested in asking Singh about his own position.

Immediately after the debate on Monday night, Singh seemed to adjust his position when he told reporters that if the case reached the Supreme Court of Canada, the prime minister would have to look at it — though Singh seemed to think this was somehow a given.

On Tuesday, he was more keen to emphasize that he would not "interfere" in the current challenge — a verb he consistently uses to describe the possibility of the federal government getting involved.

Four years ago — and several months before the 2015 campaign began — Trudeau came out strongly against the Harper government's attempt to ban the niqab from being worn during the swearing of the citizenship oath. At the time, that seemed a risky choice — however much that ban might've trampled individual rights and demonized religious adherents, it was popular.

But then, a Federal Court of Appeal ruling against the ban landed in the middle of the federal campaign. Trudeau was prepared with a definitive position. Tom Mulcair's NDP struggled with its response and then seemed to lose support in Quebec when Mulcair did condemn the ban.

Trudeau's stand on the niqab became a pivotal piece of his political story and the debate seemed to crystallize a sense that the Liberals were seizing the moment while the New Democrats were stumbling.

Fear of losing further support in Quebec might explain why Singh hasn't at least matched Trudeau's openness to intervening, or gone even further. But there is not much support left for the NDP to lose in Quebec and so this might have been like exactly the right time to take a more aggressive tack. 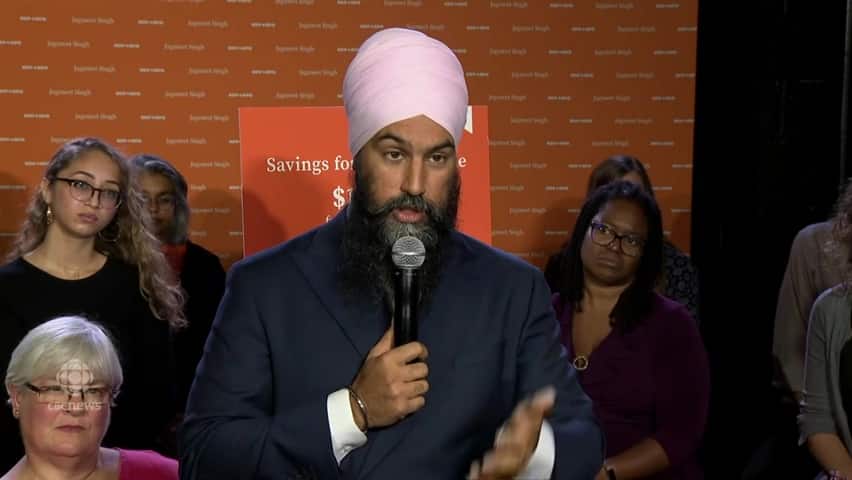 On Tuesday, Singh appealed to a desire to win the "hearts and minds" of Quebecers on this issue. That suggests a long game that might be worth playing — with Singh using his own example to break down barriers and reduce fears.

But there might also be moments when it behooves the federal government to show national leadership, not simply by appealing to everyone's better angels, but by actively fighting for individual rights.

Monday night's exchange between Trudeau and Singh could come down to the difference between a Liberal party that championed the Clarity Act and an NDP that opted instead for the conciliatory Sherbrooke Declaration, between Trudeaupian federalism and asymmetrical federalism.

But Justin Trudeau's stand in 2015 was more easily taken — it was the federal government that was trying to ban the niqab, it is a Quebec government that is pushing Bill 21.

He is also not the politician he was in 2015. As it turns out, he'd already dressed up in blackface in 2001. But that was still unknown when he was comparing the Harper government's exploitation of the niqab to some of the most infamous examples of prejudice in Canadian history.

In the fall of 2019, Trudeau is a flawed messenger trying to deliver a more nuanced message.

Those flaws might've made Monday night's move rather daring in its own right. But the mistakes of 2001 might limit how much further he can press his case.