'Not up to the federal government' to challenge Quebec's religious neutrality law: Trudeau

Prime Minister Justin Trudeau spoke for the first time about Quebec's controversial religious neutrality legislation Thursday saying it's not up to his government to challenge the law but that he would "always defend" people's rights under the charter.

'I believe fundamentally in rights, in the Charter of Rights and Freedoms, and I will always defend that'

Prime Minister Justin Trudeau spoke for the first time about Quebec's controversial religious neutrality legislation today, saying it's not up to his government to challenge the law but that he would "always defend" people's rights under the charter.

Trudeau made the comments in Roberval, Que., where he was campaigning for Richard Hébert, the outgoing mayor of Dolbeau-Mistassini, who is running in Monday's byelection.

"It's not up to the federal government to challenge this, but we will certainly be looking at how this will unfold with full respect for the National Assembly," Trudeau said in French.

"The federal government has an obligation to accept the fact that the provinces have a right to pass their own legislation, but as you know full well, as a Liberal, at the federal level, I believe fundamentally in rights, in the Charter of Rights and Freedoms, and I will always defend that," Trudeau said, adding: "And that applies to everyone in Canada."

The law prohibits public workers — including doctors, teachers and daycare employees — as well as those receiving a service from the government, from covering their faces.

It was extended to municipal services, including public transit, in an amendment made in August. 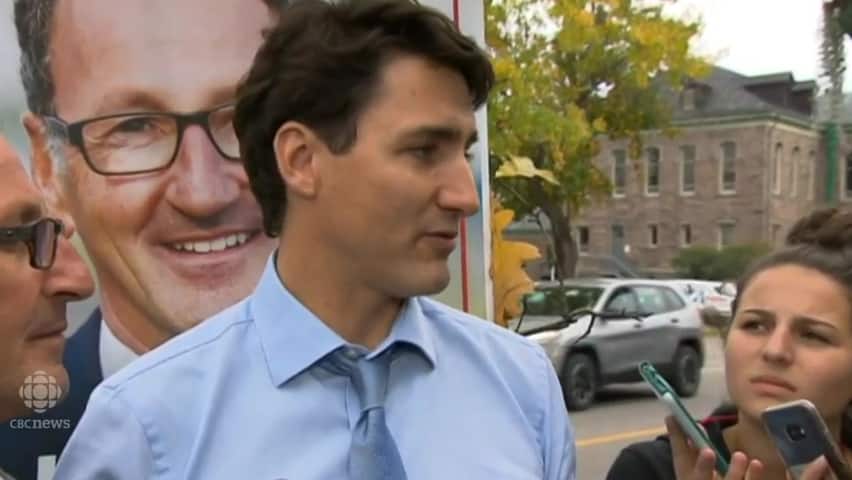 3 years agoVideo
0:38
Justin Trudeau says he respects that Quebec's National Assembly has taken a position on face coverings, but there's still a debate over how best to protect rights. 0:38

The Liberals, who hold a majority in Quebec's National Assembly, voted in favour of the bill, while all the other parties voted against.

Opposition to the bill

NDP Leader Jagmeet Singh was quick to condemn the bill upon its passing.

"I'm completely opposed to the bill, but I am completely confident in the existing protections that are in place in Quebec that will protect human rights," Singh said, adding he believes the law violates human rights.

"Fundamentally, we can't have the state telling people what to wear, what not to wear."

Singh's predecessor, Tom Mulcair, acknowledged that the NDP's support for a women's right to wear a niqab contributed significantly to the party's crashing fortunes in Quebec during the 2015 election, where a large number of voters backed the Conservative Party's pledge to ban face coverings at citizenship ceremonies.

"Ultimately, it's up to Quebecers to pass judgment on this legislation. The Conservative Party believes every Canadian has the right to express themselves and practice their religion, not just in private but in public too," said Jake Enwright, director of communications for Conservative Leader Andrew Scheer.

With files from Benjamin Shingler and Catharine Tunney