Campaigners from Greenpeace UK — a group that has staunchly opposed the expansion project in Canada — built a fake pipeline around the building, which sits next to the iconic Trafalgar Square in the city centre.

The pipeline was labelled "Crudeau Oil," a play on the prime minister's name and the crude oil that is expected to flow through the $7.4-billion pipeline project from Alberta to B.C. 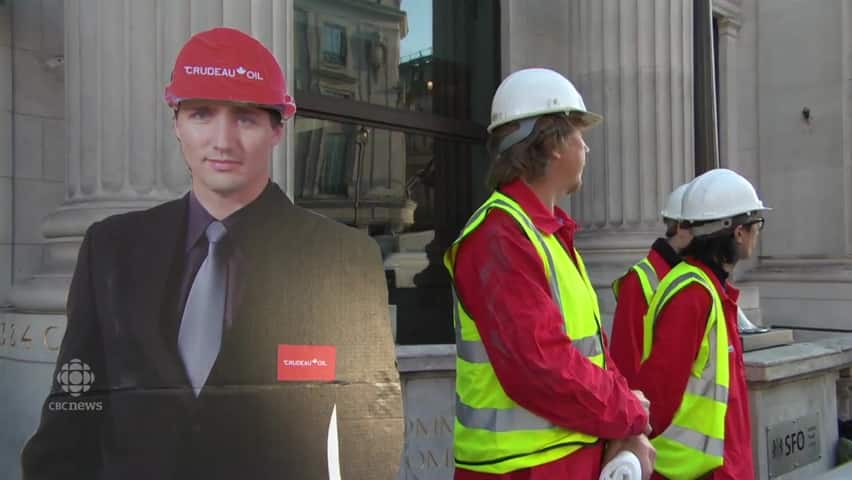 Rappellers also scaled two of the diplomatic mission's Greek-style pillars and unfurled large banners bearing the same message as British police and high commission staff stood passively on the sidewalk below and watched.

The 30 activists had hoped simply to deliver their message with Trudeau in town, but they actually saw him — for only a few seconds — when he left for a women's rights event at city hall.

"Thanks for coming out," Trudeau said to the protesters as he hopped into a waiting vehicle.

The pipeline, which will expand an existing line and significantly increase capacity, has been a political headache in recent weeks for the federal Liberal government. The proponent, Kinder Morgan, has stopped all non-essential spending on the project in response to entrenched opposition from the B.C. NDP government. The Liberal government approved the expansion project in November 2016.

Trudeau met the Queen in private

Trudeau also met with Queen Elizabeth for the third time on Wednesday.

Trudeau's audience with the Queen took place at Buckingham Palace. While the first few moments of their discussion were captured, cameras were not permitted into the Queen's apartment to record the entire conversation.

Trudeau's first meeting with the monarch took place at Buckingham Palace shortly after Trudeau took office in 2015. His second private meeting was at the Palace of Holyroodhouse in Edinburgh, the Queen's official Scottish residence. Trudeau meets with the Queen at Buckingham Palace

3 years ago
0:29
The Prime Minister is in London for the Commonwealth Heads of Government meeting 0:29

Earlier in the day, Trudeau sat down with U.K. Prime Minister Theresa May for a conversation that focused on trade and the United Kingdom's pending post-Brexit departure from the European Union.

Officials said Trudeau sought to reassure U.K. businesses that the Canadian government is prioritizing a free trade agreement with Britain.

Officials said Canada is willing to open formal trade negotiations with the U.K. the "day after" Brexit closes next March.

A statement from May's office confirmed the two discussed moving quickly on a trade agreement post-Brexit.

"Prime Minister Trudeau said he believed that, post-Brexit, the UK and Canada Governments would be able to move in rapid fashion towards a new trade deal," the statement reads.

The Canadian government plans to use the Comprehensive Economic and Trade Agreement (CETA) with Europe as the blueprint for any new deal between Canada the U.K.

"What Prime Minister Trudeau will be doing [in the U.K.] is emphasizing that this is really in our mutual interest to pursue these discussions and make sure our companies can continue to work together," Canada's International Trade Minister François-Philippe Champagne said in an interview with CBC News.

"We will continue to work to make sure [CETA] would be the basis of our discussions. Today we have a free trade agreement, things are going well, and we want that to continue with them."

May and Trudeau also discussed the recent military strikes in Syria and ramped-up diplomatic tensions with Russia, according to the statement from May's office.

Canada expelled four Russian diplomats and rejected the credentials of three others in response to a nerve gas agent attack in Salisbury, U.K. that has been widely blamed on the Russians.

"Prime Minister May thanked Prime Minister Trudeau for Canada's strong support for the UK in response to the use of a nerve agent on the streets of Salisbury," the statement reads.

Trudeau also reaffirmed his support for the decision by the U.K., in tandem with the U.S. and France, to bomb targets in Syria over the Assad regime's alleged use of chemical weapons, according to the statement.

Trudeau visited London City Hall Wednesday morning, where he met with Mayor Sadiq Khan. Trudeau took part in a discussion with youth from a local high school and marked the centenary of women obtaining the right to vote in the U.K.

Later in the day, Trudeau and May met with the prime ministers of Australia and New Zealand to discuss the most pressing security issues they are facing.

The four countries, along with the United States, make up the Five Eyes intelligence-sharing alliance.

Topping the list of issues discussed were cyberattacks, particularly those carried out by Russia.

Earlier this week, the U.S. and U.K. issued a warning that Russia has been involved in an unprecedented level of cyber-infiltration and attacks.

"So the importance of like-minded friends and partners like us four to stand together provides a response and a solidarity that is a clear message to those around the world who do not play by the same rules."

On Thursday, Trudeau will attend the Commonwealth Heads of Government (CHOGM) summit. The 53 Commonwealth nations meet every two years. This year's discussions will centre on four themes: fairness, prosperity, security and sustainability.

With files from The Canadian Press, CBC's John Paul Tasker