Prime Minister Justin Trudeau faces off with a room of angry protesters venting their frustration over everything from pipelines to the failed federal payroll system. 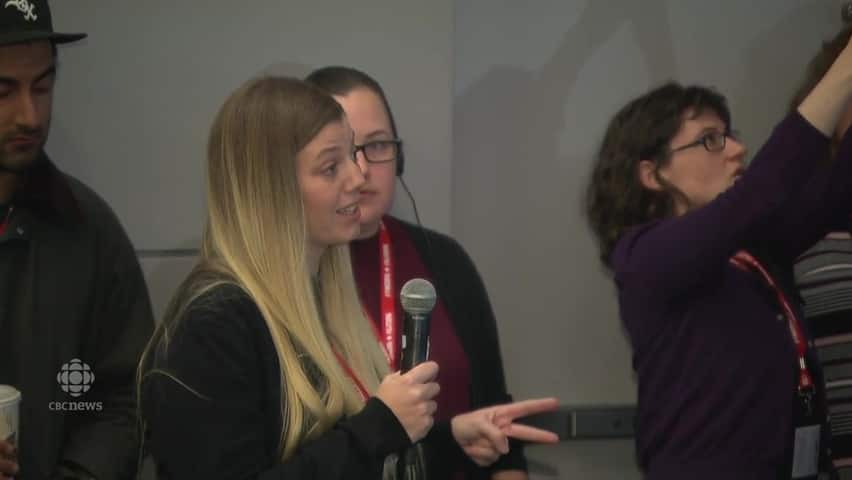 4 years agoVideo
2:40
Prime Minister Justin Trudeau responds to a question on the Phoenix pay system from one frustrated woman at the Canadian Labour Congress National Young Workers Summit in Ottawa. 2:40

Prime Minister Justin Trudeau faced off with a room of angry protesters today who were venting their frustrations over everything from pipelines to the failed federal payroll system.

Some of the participants turned their backs on Trudeau in protest during the "armchair discussion" event at the Canadian Labour Congress National Young Workers Summit in Ottawa.

"Honour your promises!" hollered some in the crowd, as event moderators tried to keep the peace.

"We don't have dialogue with liars!"

Trudeau attempted to keep calm and urged people to engage in conversation rather than a war of words that "reflects poorly" on the crowd. CLC youth say PM has turned back on them

4 years agoVideo
1:57
Delegates at the Canadian Labour Congress National Young Workers Summit discuss their fristartions with the Trudeau government which prompted their protest of the Prime Minister. 1:57

"I will tell you, it is a little bit frustrating for me to come in, sit down and look forward to hearing from you and talking with you, and seeing a room full of people who are standing in a way that shows they are not listening to me, that you don't want to engage," he said.

Some of the audience members heckled remarks about Indigenous rights and the Kinder Morgan pipeline. One placard read: "What will you commit to today?"

A woman, who identified herself as a young worker representative for the Public Service Alliance of Canada and a member of the union's bargaining team, grilled Trudeau on the failed Phoenix payroll system.

"And why are we sticking with the Conservative mandate? I'm just so confused."

After the event, one participant explained that some in the group turned their backs on the prime minister as a "deliberate message," because they believe he has turned his back on them.

"I am disappointed that they felt they could bring the prime minister to this event and expect a group of young workers who they've spent the last two days telling us to be empowered, telling us to stand up, telling us to speak truth to power," said Jessica Sikora.

"Then they put power in front of us and they expect us to sit quietly? That was never in the cards."

Erin Warman said she is upset by the "broken promises."

"Trudeau was elected to get some of these things done, electoral reform is a huge one," she said. 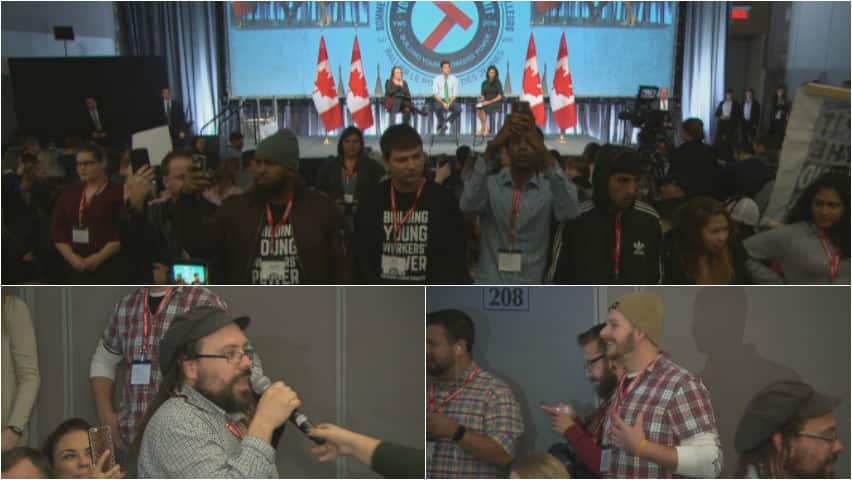 Hassan Yussuff, president of the Canadian Labour Congress, reminded the audience that the labour movement is a "respectful movement."

"The reality is, we can only have constructive dialogue to make this country a better one if we hear each other," he said. "The prime minister came here this morning as our guest. We spent 10 horrible years experiencing the worst government."

'Thank you for challenging me'

Before the 30-minute session wrapped up, Trudeau thanked the crowd and left with a thumbs up and a promise to return next year.

"Thank you for your openness, to actually hearing my answers, thank you for challenging me," he said, his words drowned out by people yelling, "Keep your promises!"

Back on Parliament Hill, opposition politicians seized on the event as evidence Trudeau's popularity is waning.

"A lot of young people are starting to be disappointed with what they're actually getting from the Trudeau government," said NDP Leader Tom Mulcair. "Because beyond the photo ops and the easy sentences and the phrases that are cooked up here on the third floor, young people are insulted when the finance minister tells them their lot in life is going to be lousy, low-paid part-time jobs."

But longtime Liberal MP Wayne Easter insisted it's just a healthy sign of people expressing their difference of opinion.

"That's fine. That happens in a democracy," he said.