Prime Minister Justin Trudeau raised a Pride flag on Parliament Hill today for the first time in the country's history, in recognition of the people who have "fought a long time" to secure equal rights for LGBT Canadians.

Prime Minister Justin Trudeau raised a Pride flag on Parliament Hill today for the first time in the country's history, in recognition of the people who have "fought a long time" to secure equal rights for LGBT Canadians.

The multi-colour rainbow flag — widely recognized as a symbol of the gay, lesbian, bisexual and trans community — will be flown on a temporary flag pole in front of Centre Block to mark the beginning of Pride Month, a time to celebrate sexual and gender diversity.

Many members of the Liberal caucus were in attendance at the event, including openly gay MPs Randy Boissonnault, Seamus O'Regan, Rob Oliphant and Treasury Board President Scott Brison.

"This is a great day for Canada and it's part of a long series of milestones this country has hit over the years. It hasn't been easy, it hasn't been automatic, a lot of people fought for a long time for this day to happen," Trudeau said.

"Canada is united in its defence of rights and it's standing up for LGBTQ rights," he said, noting it was not only Liberal MPs in attendance, but politicians from all the parliamentary parties. "And quite frankly … we still have more work to do," Trudeau said, adding that his government is pushing a transgender rights bill to extend protections to trans Canadians. 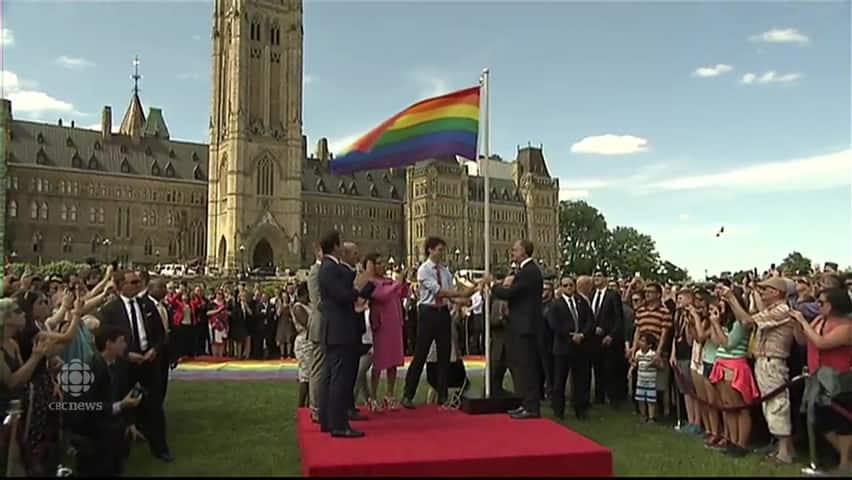 The flag gesture comes after the party announced that Trudeau would march in Toronto's Pride parade, the first sitting prime minister to take part in the festivities. "It's not going to be my first time," Trudeau said to laughs from the crowd.

Trudeau has been something of a regular at Pride in years past: he launched his election last August at Vancouver's parade, and marched alongside NDP Leader Tom Mulcair and the Bloc Québécois's then leader Gilles Duceppe later that month at Montreal's celebration.

Boissonnault said flying the Pride flag on Parliament Hill is significant both "symbolically and substantively."

Longtime LGBT rights activist — and Liberal MP — Hedy Fry agreed with that sentiment saying the flag gives validation to those in the community who have "remained hidden and in the closet for so long."

"We've seen such progress in our lifetime," Brison added. "The fact is that there is a broad consensus across party lines today — that I've never seen exist before. People know that LGBTQ rights are human rights and this is a strong sense of who we are as Canadians, and that's a wonderful step forward.

"I was born in 1967. Homosexuality was decriminalized in '68 …  I was part of a cabinet that brought equal marriage to Canada in 2005, which enabled me to get married in 2007. This has all happened in my lifetime, and now the government moving forward on trans rights. This is very exciting, and I feel very fortunate as a Canadian to have been able to live during such a period of remarkable social progress."

Bill C-16 would update the Canadian Human Rights Act and the Criminal Code to include the terms gender identity and gender expression.

If passed, the legislation would make it illegal to discriminate on the basis of gender identity or expression. It would also extend hate speech laws to include the two terms.