Prime Minister Justin Trudeau's bilateral talks with Mexican President Enrique Pena Nieto have yielded 'concrete results': Canada will lift its visa requirements for Mexican travellers as of Dec. 1, while Mexico will fully reopen its market to Canadian beef in October.

4 years ago
2:16
PM Justin Trudeau announces a number of agreements with Mexico, including lifting the Mexican visa requirements on December 1st, 2016. 2:16

Prime Minister Justin Trudeau announced a number of measures intended to reset Canada's relationship with Mexico during a two-day state visit by President Enrique Pena Nieto, including the lifting of a contentious visa requirement for Mexican travellers starting Dec.1.

"This move will make it easier for our Mexican friends to visit Canada, while growing our local economies and strengthening our communities," Trudeau said on Parliament Hill after what he said was a productive bilateral meeting with Mexico's president.

"Since 2009, this barrier has been set, but today thanks to a great political will, we are bringing it down," Pena Nieto said in Spanish.

The policy had been imposed by the previous Conservative government to stem the flow of asylum claims from Mexico, which nearly tripled from 2005 to 2008, when Mexicans accounted for more than 25 per cent of all refugee claims filed in Canada.

"I'm also happy to announce that Mexico has agreed to open their domestic market to all Canadian beef products. This is a move that will support Canadian farmers and Canadian families," Trudeau said of the ban that will end in October.

Canada's beef industry welcomed the lifting of the decade-long ban imposed by Mexico in 2003 over fears of mad cow disease.

"We share more than just a continent. We share values, goals and ambitions. Not only for our respective citizens, but for all members of our global community," Trudeau said.

"And we're prepared to take action in ways that will make a real difference in people's lives."

"One specific initiative will give Indigenous people, especially women, greater access to education, with the ultimate goal of stimulating innovation and entrepreneurship locally."

In a joint statement, the two leaders said they agreed to work together on a number of other fronts, including the environment, security and defence.

Other areas of agreement include:

The state visit by the Mexican president comes ahead of Wednesday's North American Leaders Summit with U.S. President Barack Obama, a gathering otherwise known as the Three Amigos.

Trudeau's decision to ease the travel requirements for Mexican nationals comes amid a warning from bureaucrats that the move comes with significant risks.

"Trudeau has disregarded expert analysis and evidence, and taken a political decision that puts the security of Canadians at risk," Rempel said in a written statement Tuesday.

"The decision to lift the visa appears to be a completely political quid pro quo, rather than a decision based on evidence and Canada's national interests." 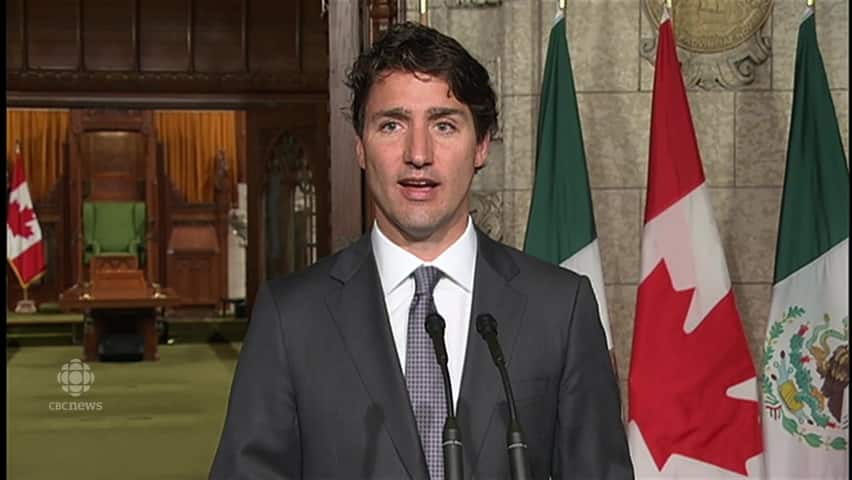 Trudeau weighs in on Human Rights concerns in Mexico

4 years ago
0:49
Trudeau weighs in on Human Rights concerns in Mexico 0:49

Tuesday's announcement also comes four days after the Canadian government updated its travel advisory warning against non-essential travel to northern and western states in Mexico due to protests.

According to the latest travel advisory, Canadian travellers to Mexico "should exercise a high degree of caution due to violence in those parts of the country experiencing a deteriorating security situation.… High levels of criminal activity, as well as demonstrations, protests and occasional illegal roadblocks, remain a concern throughout the country."

Mexican teachers opposed to the government's education reforms have clashed with police in recent days as authorities investigate whether law enforcement officials are responsible for civilian deaths earlier this month.

Trudeau waded into the issue after a reporter from Mexico asked Pena Nieto about it during the joint news conference earlier in the day.

"As a teacher, I had a good conversation with the president on this — on the concerns around the troubling incidents, but also the need to engage in constructive dialogue and ensure a strengthening of the rule of law.

"Canada, as always, will be a strong and firm partner to Mexico as it deals with the outcome of these tragedies and these conflicts," Trudeau said, adding that "it is important that we move forward towards greater respect and defence of human rights. That's part of the thing that friends work together on well."

Following the joint press conference, Trudeau and Pena Nieto took questions from students during a town hall at a nearby museum. 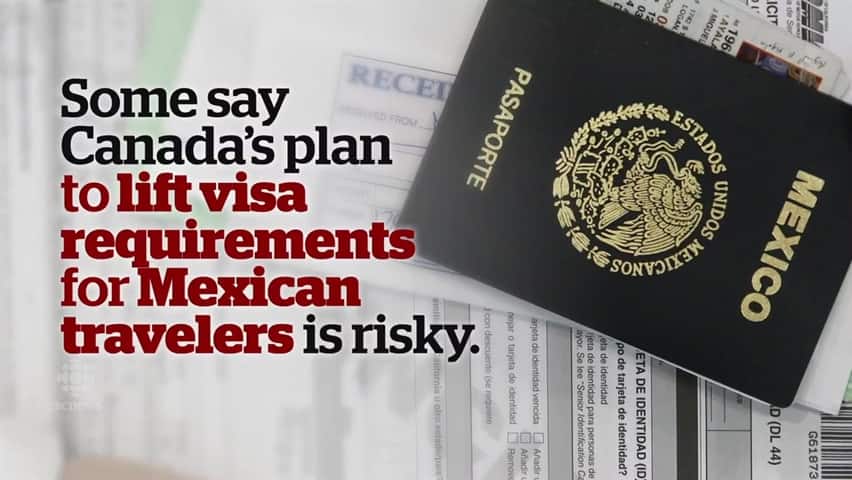 4 years ago
1:35
Some say Canada's plan to lift visa requirements for Mexicans is risky. 1:35

Trudeau and Pena Nieto began the day with a morning run, crossing the provincial boundary from Ontario to Quebec across the Ottawa River on the Alexandra Bridge.

The two leaders spoke as they ran side by side on the wooden boards of the span's footpath into Gatineau, Que.

The guests at the state dinner were drawn from a wide cross-section of Canadian society and includes cabinet ministers, parliamentarians, Indigenous leaders, heads of Canadian industry and entrepreneurs, heads of cultural agencies, educators, researchers, along with other members of civil society and members of the Mexican community in Canada.

Pena Nieto was treated to a dinner that featured a range of items meant to reflect different parts of Canada, including caribou loin from Rankin Inlet, Niagara prosciutto and other delicacies.

After Wednesday's meeting with Obama, the Mexican president will travel to Chile for a meeting of the Pacific Alliance. 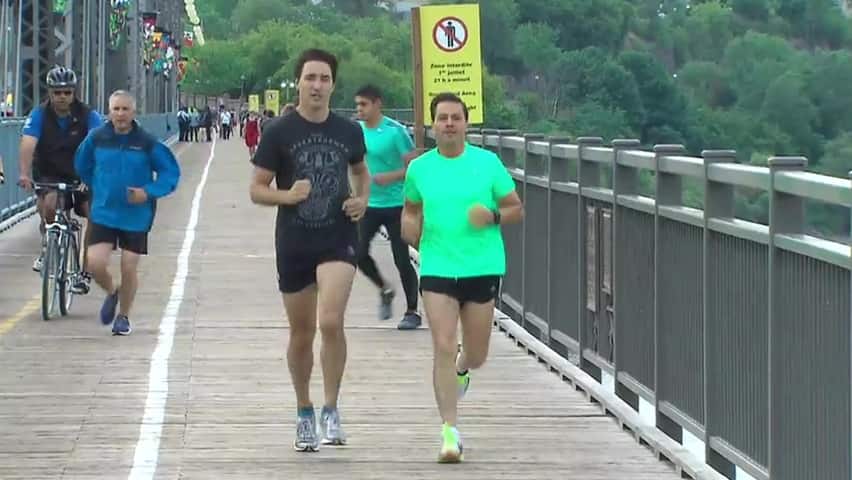 Trudeau and Pena Nieto: World leaders who run together...