When Prime Minister Justin Trudeau spoke before thousands of students assembled for convocation at Yankee Stadium on Wednesday, he did his best to inspire. But there's a shadow hanging over the PM's 16th official trip to the United States: the future of NAFTA.

When Prime Minister Justin Trudeau spoke before thousands of students assembled for convocation at Yankee Stadium on Wednesday, he did his best to inspire.

But there's a shadow hanging over the PM's 16th official trip to the United States: the future of NAFTA.

The clock is about to run out on an unofficial NAFTA deadline, smack in the middle of Trudeau's three-day U.S. visit. Congress has told American negotiators it needs a signed NAFTA agreement by May 17; otherwise it won't be able to pass the deal during the current sitting.

After that date, Mexico's election — followed by U.S. midterm elections — will add new political uncertainty to the renegotiation process. If a new NAFTA deal is going to happen at all in 2018, it may be now or never.

Trudeau undoubtedly will continue to sing the praises of open trade and the importance of the Canada-U.S. relationship during this trip. He'll meet again with business leaders and regional politicians to enlist their help in pushing for a renegotiated NAFTA.

By actively pursuing that strategy as the clock runs out, Trudeau might blunt some of the criticism he can expect if he fails to land a deal this year. But the question remains whether he can offer anything more concrete than words at this point.

Trudeau said Tuesday that he remains optimistic about the NAFTA talks.

"There is very much an imminently achievable outcome that will be good for the United States, good for Canada, good for Mexico. And we're very close," Trudeau told reporters in Calgary.

A speech at Yankee Stadium — followed by a pitch

The very first item on Trudeau's itinerary was an address to thousands of students and their families at Yankee Stadium in a commencement address for New York University. He also received an honorary doctorate of laws.

Trudeau urged graduates to challenge their own views, and the views of others, by always keeping an open mind instead of "cocooning" in an intellectual bubble.

"As you go forward from this place, I would like you to make a point of reaching out to people whose beliefs and values differ from your own. I would like you to listen to them, to truly listen, and try to understand them, and find that common ground." 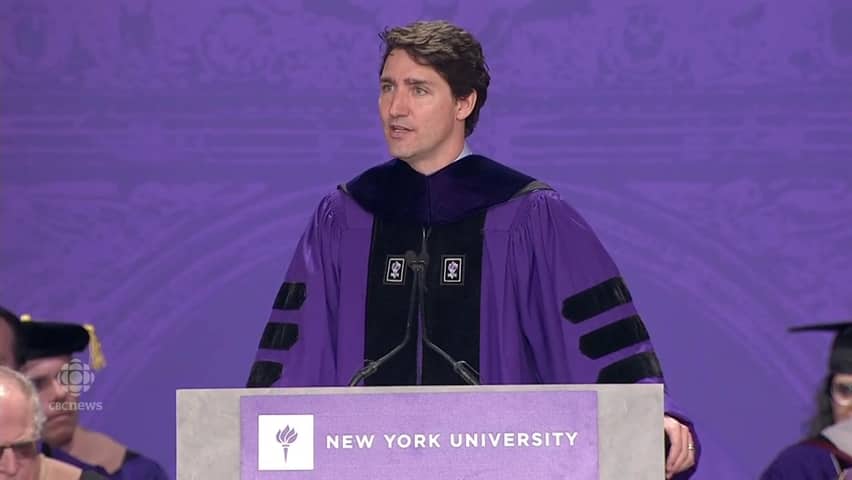 Trudeau said conversations should be based on a genuine exchange of ideas rather than winning a debate or scoring points.

"It's far too easy, with social media shaping our interactions, to engage only with people with whom we already agree. Members of our tribe. This world is bigger than that," he said.

In an era of divisive politics and protectionist policies, Trudeau said the world needs leadership that brings diverse people together for a common cause.

"This is the antithesis of the polarization, the aggressive nationalism, the identity politics that have grown so common of late," he said.

Trudeau will spend Wednesday and Thursday meeting with business leaders and talking about the benefits of investing in Canada. On Thursday — the day Congress's unofficial NAFTA renegotiation deadline passes — he'll take part in armchair discussion at the Economic Club of New York. Chances are he'll face some pointed questions about the trade talks.

Trudeau's trip wraps up Friday after he headlines a plenary session at the Solve at MIT conference in Cambridge, Mass.

The three-day annual event brings together people from the world of business, politics and academia "to discuss some of the world's most pressing problems," according to the university. Other prominent speakers include acclaimed cellist Yo-Yo Ma and Eric Schmidt, former executive chairman of Google and Google's parent company Alphabet Inc.

Trudeau will be speaking at a session focused on the trials and tribulations of creating a start-up, alongside a diverse group that includes the president of MIT, an Olympic athlete from Tonga best known for appearing oily and shirtless at the opening ceremonies and the chief technology correspondent for media outlet Axios.