'We're going to get through this together': Trudeau calls for unity after mass killing

Prime Minister Justin Trudeau urged Canadians to come together to support Nova Scotia in wake of one of the most terrible mass homicides in Canadian history.

Prime Minister Justin Trudeau urged Canadians to come together to support Nova Scotia in wake of one of the most terrible mass homicides in Canadian history.

At least 19 people are dead in Nova Scotia after a man went on a rampage across northern Nova Scotia starting Saturday night. Police said Sunday night the suspected shooter, 51-year-old Gabriel Wortman — who at one point during the attack wore a police uniform and drove a mock-up police cruiser — was killed after being intercepted by officers in Enfield, N.S.

"We're going to get through this together," Trudeau said during his daily briefing on Monday, which he dedicated entirely to the tragedy.

"How could this happen? We may never know why. But we do know this — no one man's action can build a wall between us and a better day, no matter how evil, how thoughtless or how destructive.

"Canadians are kind and generous. We are there for each other and we look out for one another. As families grieve the loss of a loved one, all Canadians are standing with them." 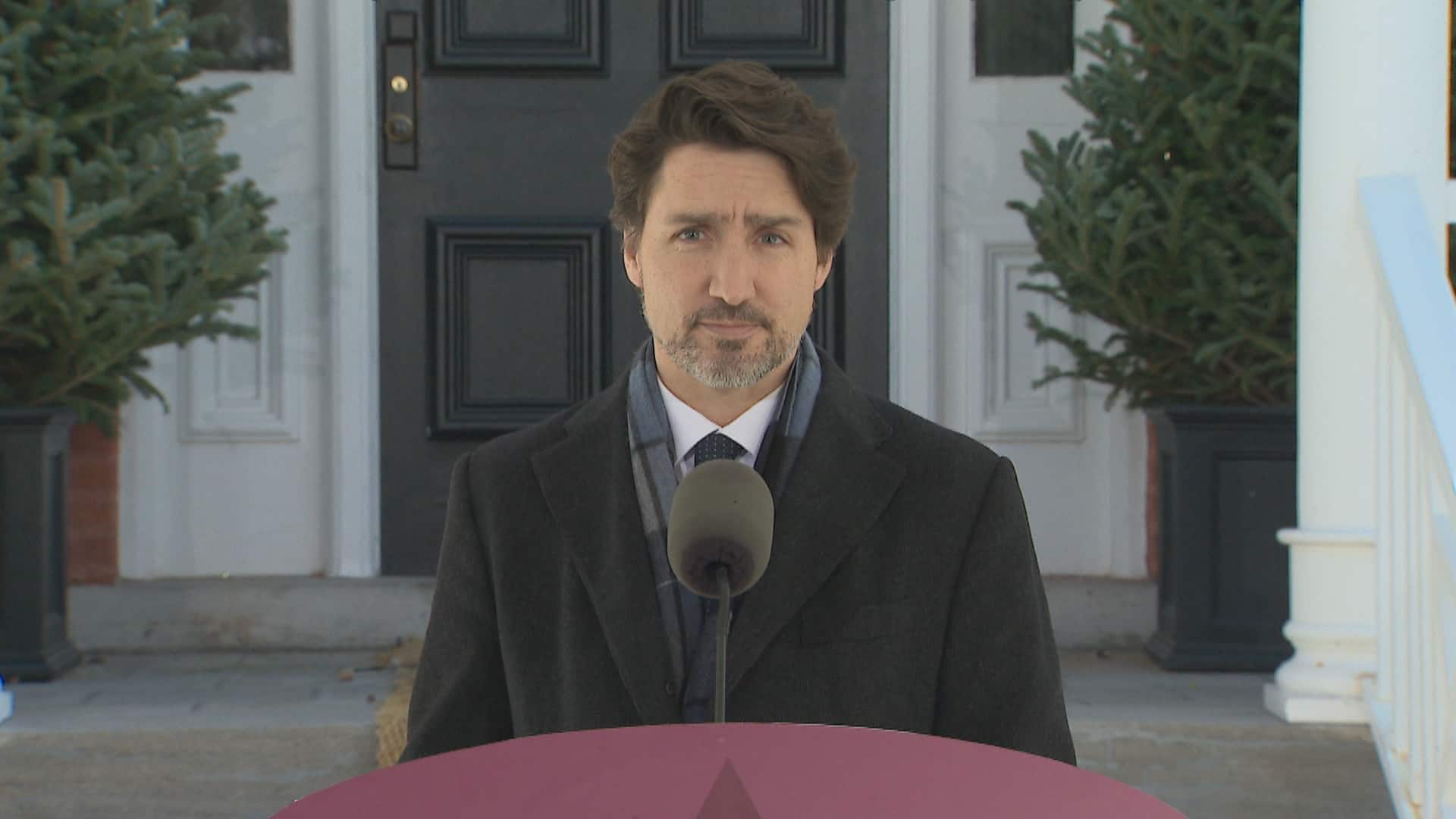 'We stand with you and we grieve with you': Trudeau

6 months ago
6:14
Prime Minister Justin Trudeau offers his condolences after a mass killing in Nova Scotia.     6:14

A virtual vigil is set for 7 p.m. AT Friday through the Facebook group Colchester Supporting our Community.

Trudeau also offered his condolences to all the victims, including RCMP Const. Heidi Stevenson, a 23-year member of the force and mother of two.

"This tragedy is a painful reminder of the risks our first responders take to keep us safe, of the sacrifices they make every single day to protect our communities. Paramedics, doctors, nurses, police officers, firefighters – they are always here for us," he said.

"Many of you are already working overtime because of this pandemic. Our communities need you now more than ever and I know that can weigh on you at times. These are exceptional circumstances and yet, you did what you always do. You ran towards danger. Without pause, without hesitation, you put your life on the line." 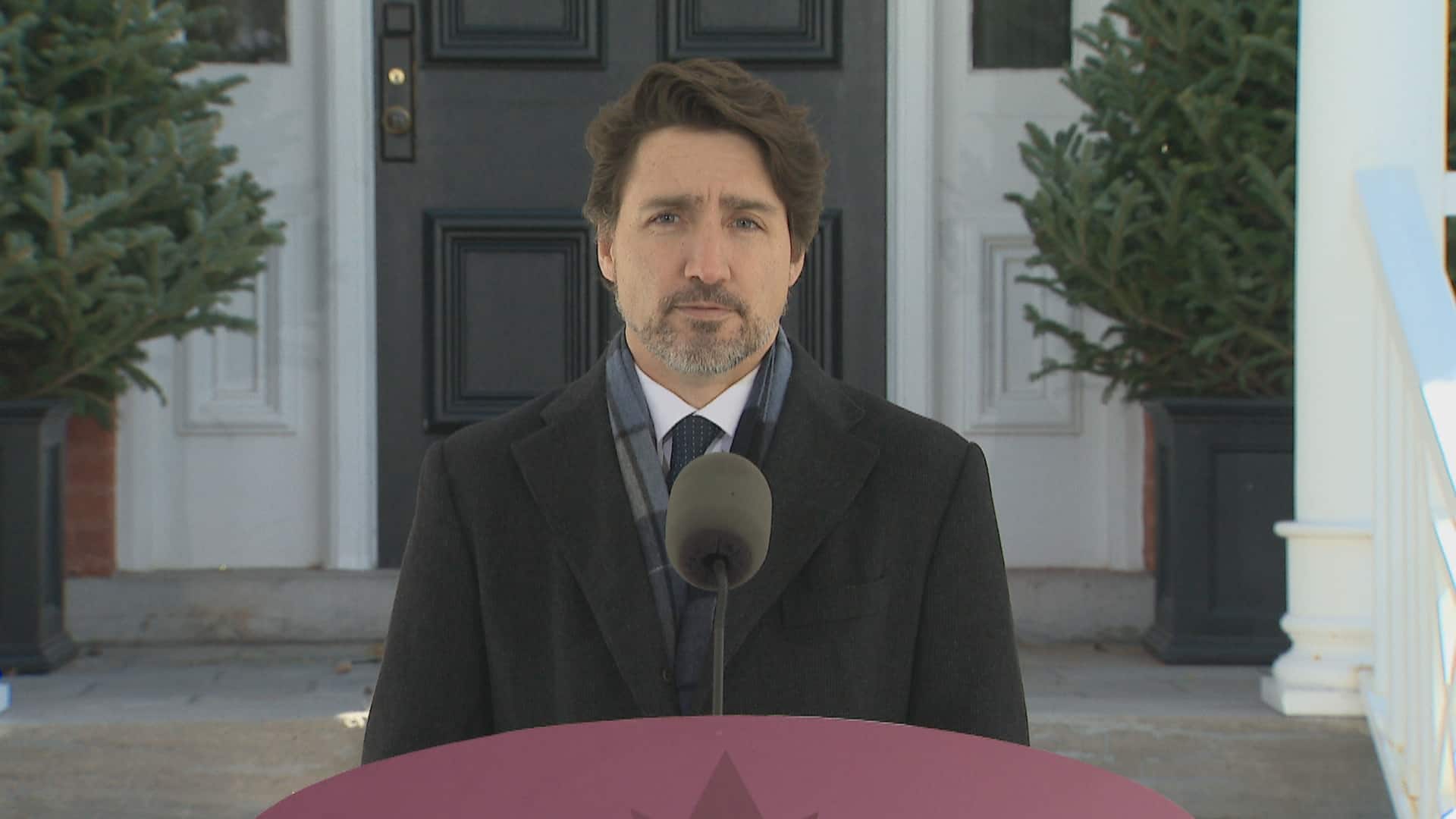 Trudeau said his government is looking at moving ahead with stricter gun control measures as Parliament returns for some regular sittings during the pandemic.

"This is very much an ongoing investigation that is in its early stages in Nova Scotia right now. So I don't want to jump to conclusions," he said.

"I can say we were on the verge of introducing legislation to ban assault-style weapons across the country. It was interrupted when the pandemic caused Parliament to be suspended. We have every intention of moving forward on that measure, and potentially other measures, when Parliament returns."

Later in the House of Commons, MPs in an an almost-empty Commons chamber stood for a minute of silence after question period to remember the victims of the shooting.

Watch: Prime Minister Justin Trudeau spoke in the House of Commons on Monday: 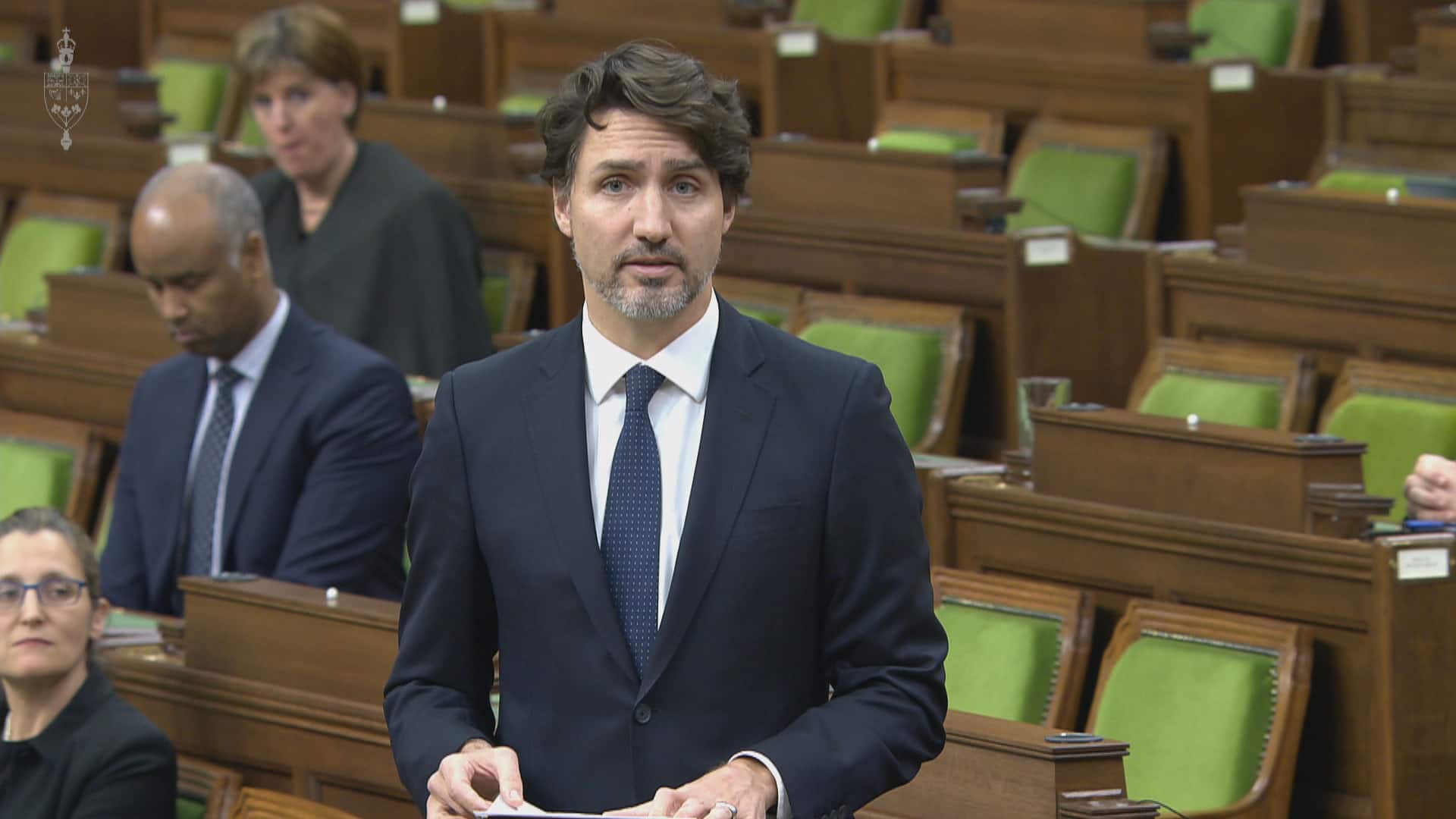 6 months ago
6:05
Prime Minister Justin Trudeau spoke in the House of Commons on Monday. 6:05

Trudeau said that Canadians are having trouble coming to grips with the fact that this happened in a rural community, where neighbours rely on one another and rarely even lock their doors.

"Everyone knows each other, everyone is in shock," he said. "This horrific tragedy happened at a time when Canadians from coast to coast to coast were making sacrifices to keep each other safe. At a time where they're making the right choices every single day to prevent more heartbreak and more tragedy.

"When we awoke yesterday to horrific reports coming out of Nova Scotia, many of us probably asked ourselves, "Just how much more can we take?"

The Liberals committed during the fall election campaign to outlawing military-style assault rifles, including the semi-automatic AR-15, and said they planned to empower provinces and cities to take steps to manage the storage and use of handguns within their own jurisdictions.

Before the pandemic struck, Public Safety Minister Bill Blair had been developing a list of prohibited weapons that will include specific makes, models and descriptions.

It's not clear yet what kind of weapon Wortman was using.

"I am very much open to moving forward with our gun control legislation. I think there is always going to be questions of when is the right moment to do that," Trudeau said.

Watch: Conservative Leader Andrew Scheer offers his condolences to victims of the shooting: 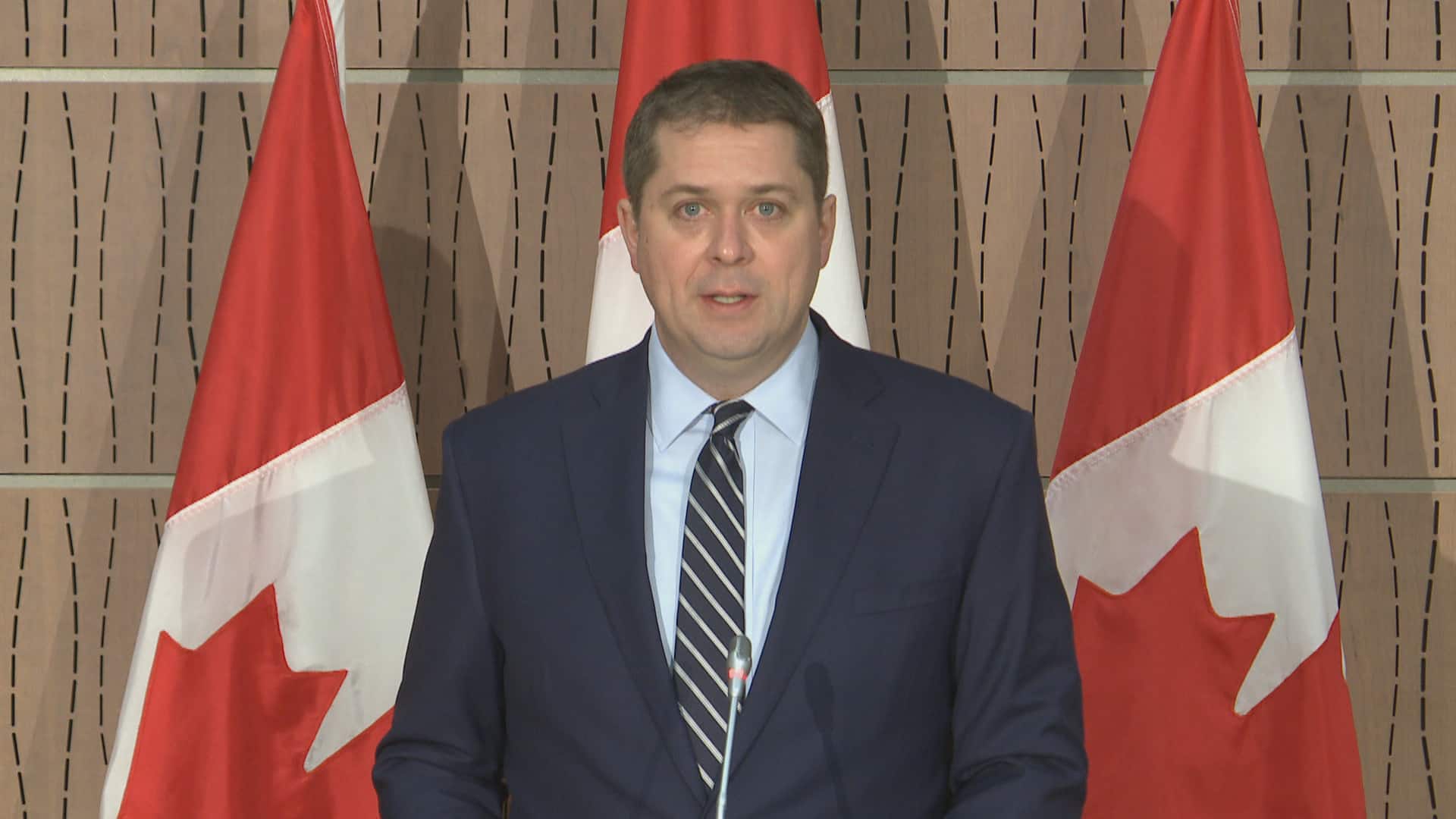 Conservative Leader Andrew Scheer also offered his condolences as the country waits for more details about the investigation.

"First and foremost I would like to send our support to the victims and we are going to wait until we have all the details on this issue. We need to have all the facts and then we will be able to make decisions on that," he said earlier this morning.

"My condolences and sincere sympathies go out to the victims and their families. I cannot imagine the devastation that the families feel."

In the House of Commons Conservative deputy leader Leona Alleslev said the shooting was "a reminder of the risk all our first responders take to keep Canadians safe. As they put on their uniforms and brave the unknown, Canadians rest easy knowing that they are protected in their communities." 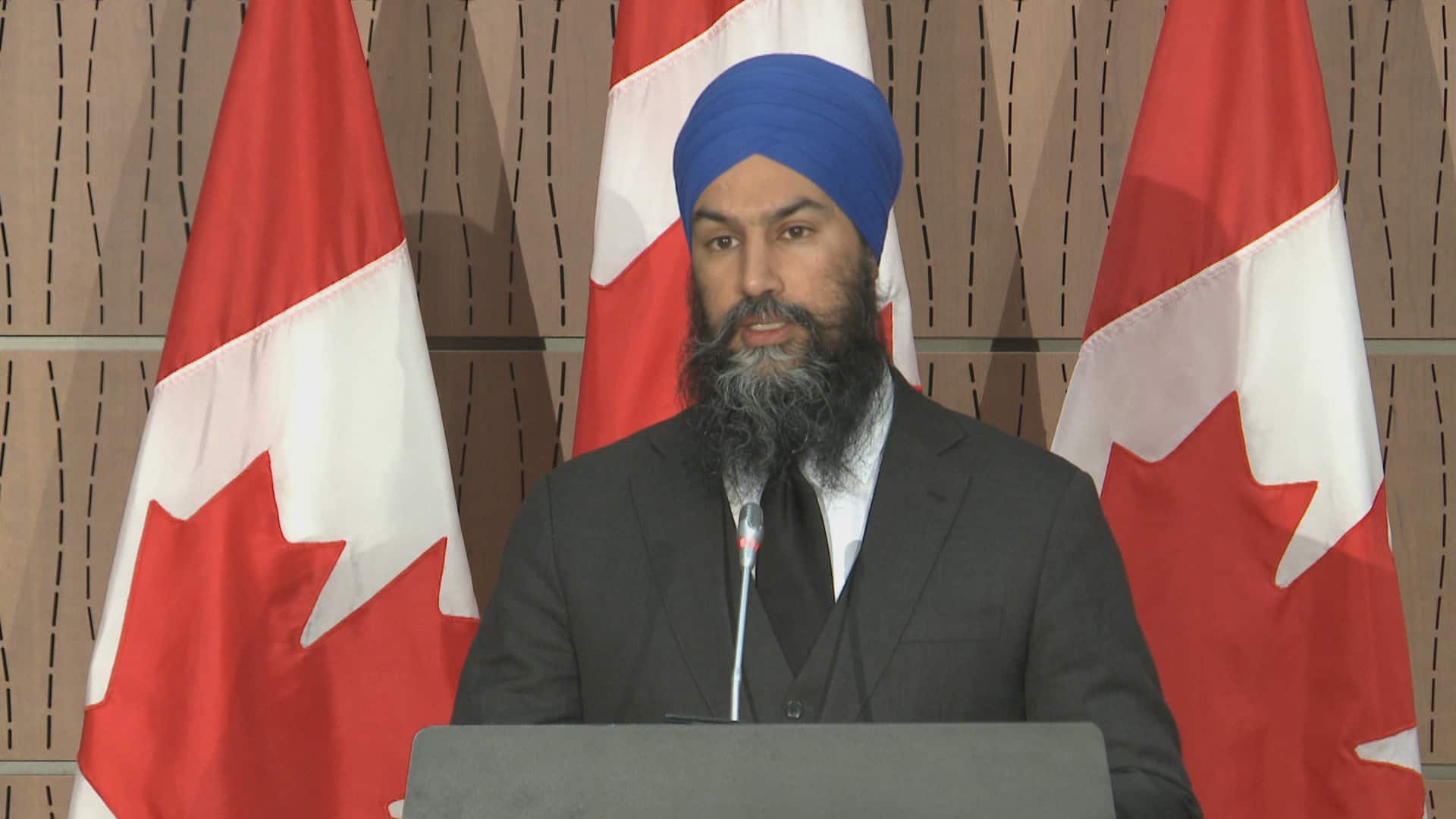 NDP Leader Jagmeet Singh said the tragedy is made worse by the fact the families won't be able to gather and mourn in person because of the ongoing pandemic.

"I want to acknowledge the bravery and the loss of RCMP officer Heidi Stevenson," he said.

"I also want to acknowledge that, given the safety measures we are taking because of the COVID-19 crisis, people will not be able to come together and mourn the usual way, making this horrible, senseless violence and tragic event even more painful."

"Each and every one of the victims represents an immense lost to their family and community. We remember the RCMP officer Heidi Stevenson who lost her life while attempting to protect others."

Watch: Opposition Parties speak in the Commons about the Nova Scotia shootings:

Opposition Parties speak in the Commons about the Nova Scotia shootings

Later in the House of Commons, Singh praised the bravery and resolve of first responders.

"The past several weeks, we've seen the courage of first responders in the face of COVID-19, those who are running to harm's way to keep us safe. And now we've got an example of an RCMP constable who did exactly that — ran towards the fire, ran towards harm to save the lives of others, and in saving the lives of others lost hers," he said.

Bloc Québécois Leader Yves-François Blanchet stood in the Commons to note that Quebec is no stranger to such senseless brutality.

"Anyone capable of compassion will be feeling that pain."