Prime Minister Justin Trudeau has confirmed he will attend a meeting of NATO heads of state and government in Warsaw, Poland, on July 8 and 9 and will also make his first official visit to Ukraine on July 11 and 12.

Prime Minister Justin Trudeau has confirmed he will attend a meeting of NATO heads of state and government in Warsaw, Poland, on July 8 and 9 and will also make his first official visit to Ukraine on July 11 and 12.

A statement released by the Prime Minister's Office said Trudeau would travel to the site of the former Auschwitz-Birkenau concentration camp after the NATO summit to remember the "six million Jews and the millions of other victims who were brutally murdered by the Nazis during the Holocaust."

Auschwitz-Birkenau, which was built by the Nazis in what was then German-occupied Poland, is now the site of a memorial and museum.

Among the issues NATO leaders are expected to address is countering Russian aggression in eastern Ukraine and the surrounding region.

Trudeau announced his upcoming visit to Ukraine while speaking at the Canada-Ukraine business forum in Toronto Monday, where he also pledged Canada's support for the former Soviet state.

"Canada will continue to defend Ukraine's sovereignty in response to Russia's illegal annexation of Crimea as well as its support to insurgents in eastern Ukraine," he said.

"And we will continue to stand firmly beside Ukraine as you lead important reform efforts in your country, including directly supporting efforts to strengthen democracy, respect the rule of law, and encourage economic growth," Trudeau added. 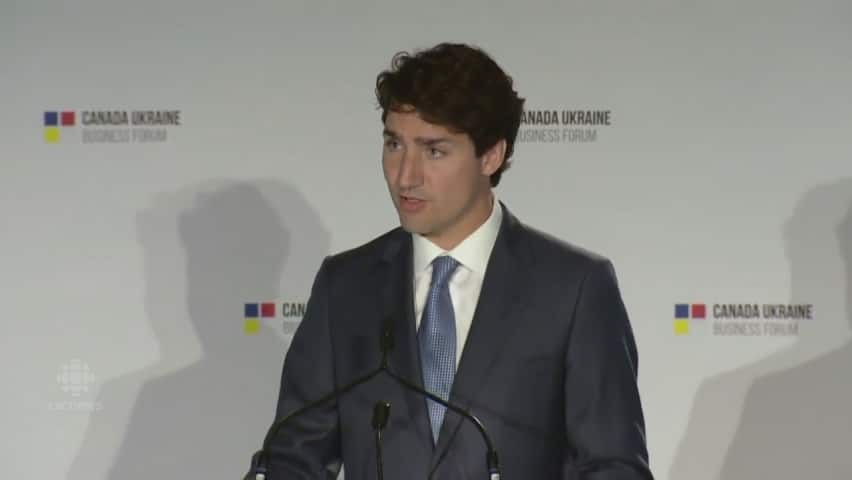 But the prime minister also spoke about the "people to people" ties between Canada and the Ukraine, and the need to help the middle class in Ukraine to grow and thrive economically.

"Our government has made the signing of the Canada-Ukraine free trade agreement a top priority," Trudeau said.

The deal, however, was not formally signed at that time.

Now that the legal scrubbing and translation of the deal is complete, a signing ceremony is expected during Trudeau's visit. Legislation to implement the deal would follow next fall.