Prime Minister Justin Trudeau and Finance Minister Bill Morneau are out selling their pre-election budget to the country — but they're also using the opportunity to blast Ontario's Ford government as obstructionist and committed to faulty economic logic.

Prime Minister Justin Trudeau and Finance Minister Bill Morneau are out selling their pre-election budget to the country — but they're also using the opportunity to blast Ontario's Ford government as obstructionist and committed to faulty economic logic.

At a Thursday funding announcement in Mississauga, Ont., Trudeau directly called out the government of Premier Doug Ford for what he called its sluggish response to an offer of federal infrastructure funding.

"That's not fair. Here in Ontario it's been over a year since we signed an agreement with the fund, with the province, for more than $11 billion in federal funding and we still haven't received a single project for approval," the prime minister said.

"This province and a couple of others have been unwilling to move forward in partnership with the federal government on infrastructure investments."

"This certainly was an election budget ... with endless deficits," Fedeli said.

Ford's Progressive Conservatives are set to table their first budget on April 11, and early indications are that the provincial government will chart a path back to balanced books.

In the months since they took office, the PCs have been accused of worsening Ontario's fiscal situation by billions of dollars by killing the province's cap-and-trade carbon pricing program.

But getting a government's balance sheet back to black in the short term isn't always the right call, Morneau said.

"Austerity in cuts" doesn't benefit Canadians, Bill Morneau told host Chris Hall on CBC Radio's The House when asked how the federal Liberals felt about being pitted against the Ford government. He added he thinks federal and provincial Conservatives are completely off-base with their fiscal plans.

"I don't frankly think that there's any economic argument behind what they're saying." 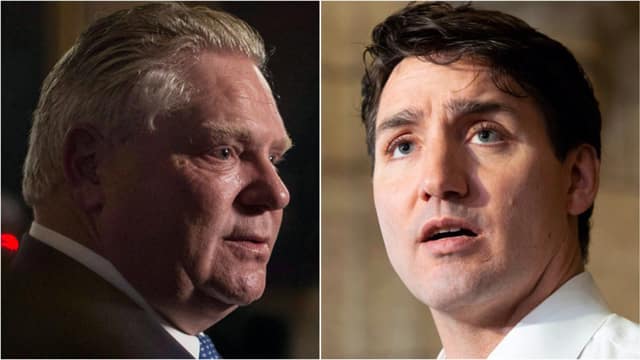 2 years ago
7:37
Doug Ford's Ontario government unveiled its plan to combat climate change this week, prompting criticism from the federal environment minister, who said the province 'wants to go back in time.' 7:37

Morneau also called out the federal Conservative Party, accusing it of being far too rigid about balanced books and arguing that there are times when running a deficit is the right call.

"The Conservatives — and I will make that a larger Conservative because it includes (federal Conservative Leader) Andrew Scheer ... (are) arguing that we should do the exact same thing they were proposing in 2015," he said, taking a shot at former prime minister Stephen Harper's funding cuts while in office.

"So why should we think that their results would be any different than what they left us with?"

Harper's last budget left the federal government with a surplus of a $1.9 billion. The Trudeau government's latest budget says the deficit is sitting at at $14.9 billion. The Liberals promised when elected in 2015 that the budget would be balanced by this year.

Both the federal Liberals and Conservatives see Ontario as a key election battleground and hope to pick up votes by attacking the reputations of provincial leaders.

Scheer compared Trudeau and his government's "free spending" to the Ontario Liberal governments of Dalton McGuinty and Kathleen Wynne that preceded Ford.

In the nine months since Ford was elected premier, he and Trudeau have clashed over the carbon tax plan, provincial cuts to bilingual services, the federal plan to deal with irregular border-crossers and possible cuts to Ontario's kindergarten services.