'No plans to double our defence budget,' Trudeau says

Prime Minister Justin Trudeau set himself on a political collision course with U.S. President Donald Trump Tuesday by laying out unequivocally that Canada will not meet NATO's benchmark for defence spending.

Canada spends 1.23% of GDP on military spending, according to new NATO figures

Prime Minister Justin Trudeau set himself on a political collision course with U.S. President Donald Trump Tuesday by laying out unequivocally that Canada will not meet NATO's benchmark for defence spending.

"There are no plans to double our defence budget," Trudeau told reporters at the end of a bilateral visit to Latvia, where he announced Canadian troops would remain until 2023.

NATO asks its members to set aside the equivalent of two per cent of their gross domestic product for military spending.

New figures released Tuesday by the military alliance show Canada only hits 1.23 per cent of GDP.

Demanding allies meet the two per cent metric has been an often-repeated mantra for Trump ahead of this week's leaders summit in Brussels.

In a whirlwind tour of the NATO base at Adazi, where he met with troops from eight countries, Trudeau used the composition of the multinational battle group, which Canada leads, as an illustration that membership in NATO is more than just dollars and cents.

"What we are demonstrating here with this battle group is that NATO is not just a relic of the past, but as an essential element as we build a future based on our shared values," he told soldiers assembled at an outdoor ball hockey rink. 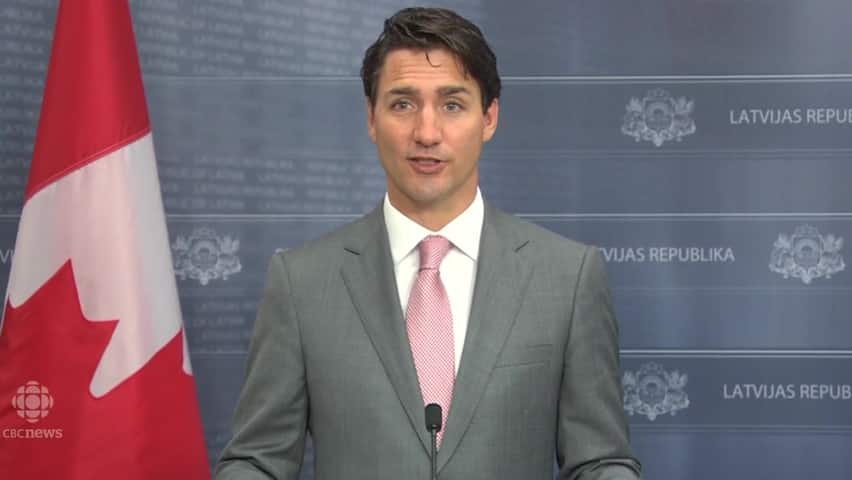 3 years agoVideo
1:38
PM Justin Trudeau announces a 4 year extension of Canada's military mission to Latvia, as well as an increase in troops that will serve there. 1:38

"We are training together, learning together and developing a level of interoperability that goes beyond military tactics and abilities. It goes to how we understand each other, how we learn from each other and how we grow together. That as a demonstration of our shared values and convictions as an alliance is as strong as any other indication we can show with the amount of tanks or the amount of firepower."

Trump says they'll 'work something out'

The two per cent benchmark was originally set at the 2002 Prague Summit, but leaders of the western alliance signed a pledge in 2014 saying they would work towards that goal by 2024.

Trump, in a series of speeches recently, has vowed to force allies to pay up, although he sounded somewhat conciliatory on departing Washington on Tuesday.

"NATO has not treated us fairly, but I think we'll work something out," he told reporters.

"We pay far too much and they pay far too little. But we will work it out and all countries will be happy."

The fact Canada has no intention of raising defence spending to two per cent was laid out in the Liberal government's defence policy last year. It forecast hitting 1.4 percent of GDP by 2024.

Several times on Tuesday, Trudeau outlined the spending his government plans, including the expected purchase of 88 new fighters for the air force and 15 frigates for the navy.

He described the NATO target as "easy shorthand" and a "limited tool" and said Canada is always focused on having the capacity to respond when called upon.

The argument is not dissimilar to one the former Conservative government made when it faced pressure to ramp up defence spending prior to 2015.

Trudeau received some political backing from Latvian Prime Minister Maris Kucinskis, whose country meets the benchmark and has openly said it is prepared to spend more.

He said the percentage doesn't matter and it's all about capability.

Kucinskis seemed happy to have Canada's commitment to continue to lead one of the three NATO battle groups in the Baltics.

"Today all of us are a little bit Canadian," he told troops at Adazi. "And we see and we feel that all of the Canadians have become a little bit Latvian."

In addition to announcing the extension, Trudeau revealed that the army will deploy an extra 85 soldiers, many of them logisticians and engineers to help run the battle group.

The additional commitment will play well at NATO, which is in the process of organizing a division headquarters to co-ordinate the operations in the Baltics.