Prime Minister Justin Trudeau pledged Thursday to do what it takes to make sure the Kinder Morgan pipeline from Alberta to British Columbia is built.

Prime Minister Justin Trudeau pledged Thursday to do whatever it takes to get the Kinder Morgan pipeline from Alberta to British Columbia built.

"We're going to ensure that pipeline gets built because it is in the national interest," Trudeau told reporters in San Francisco, California during the second day of his Western U.S. tour.

"We've moved forward on a plan that demonstrates that the economy and the environment must go together … and we're going to get our resources to market safely and securely."

Trudeau is in California as part of a four day tour of the U.S.

On Wednesday Trudeau was in Chicago, where he met with business and political leaders before giving a speech to students at the University of Chicago.

Jason Kenney, the leader of Alberta's United Conservative Party, was in Ottawa on Thursday to react to the federal government's revamping of the environmental assessment process for natural resources projects.

Kenney described the plan as a way to ensure no such projects are built before accusing the Trudeau government of not doing enough to ensure the Kinder Morgan pipeline is built in the face of social and political opposition in B.C.

"Already we have a serious attack on our energy industry by the NDP government in British Columbia," Kenney said.

"The Trudeau government is failing to act in defending Canada's economic union, free trade and federal jurisdiction, which they could do by easily challenging, in court, B.C.'s attack on our energy industry." 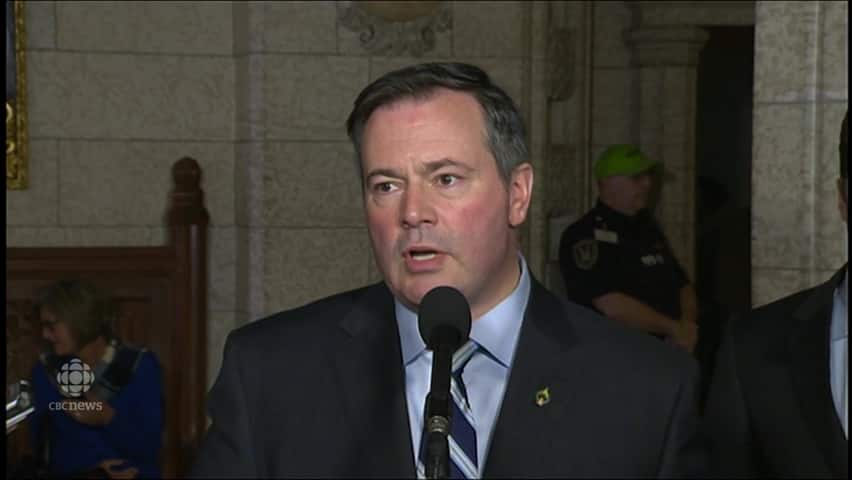 Asked if he intends to take the B.C. provincial government to court in order to overturn its efforts to prevent the expansion of the pipeline, Trudeau brushed off the suggestion — at least for the time being.

"B.C. has not taken any action that we can take them to court over right now. They have only made statements," Trudeau said.

"We are intending to, and going to, be following through on building that pipeline."

Last week, B.C. Premier John Horgan's NDP government said it is looking at rules to limit any increase in imports into the province of diluted bitumen until an independent panel can determine whether the system is safe and whether authorities can deal adequately with a spill disaster.

That decision has been criticized by advocates of the pipeline as little more than a move that could delay construction on the federally-approved Kinder Morgan pipeline expansion project.

"This action will harm the B.C. wine industry," Notley said. "Alberta will not stand by and be the only province impacted by another province's refusal to play by the rules."

In response, Horgan said he won't be escalating the conflict.

"I'm not responding in any way other than saying I'll defend our wine industry. I'm here for B.C., not for Alberta," he said.