Justice Minister Jody Wilson-Raybould has introduced major changes to the country's impaired driving laws, including provisions that will allow for mandatory roadside alcohol screening and new criminal offences for driving while high.

The legislation, introduced concurrently with the government's cannabis legalization bill, will allow police to demand a driver provide an "oral fluid sample" — saliva — if they suspect a driver is drug impaired. A positive reading could lead to further testing, including a blood test, to determine whether a criminal offence has been committed.

Three new drug-related offences will be also be created for drivers who have consumed drugs within two hours of driving. A driver who is found to have two nanograms but less than five nanograms of THC per millilitre of blood could face a maximum fine of up to $1,000 (THC is the primary psychoactive found in cannabis).

A driver who has a blood level of more than five nanograms of THC, or has been drinking alcohol and smoking pot at the same time, will face a fine and the possibility of jail time. In more serious cases, a drug-impaired driver could face up to 10 years if convicted.

The government did not specify which drug testing device it would recommend police use for enforcement, but other jurisdictions use the DrugWipe system, which can detect traces of cannabis, opiates, cocaine, amphetamine, methamphetamines (MDMA, ecstasy), benzodiazepines and ketamine.

"Impaired driving is the leading cause of criminal death and injury in Canada," Liberal MP Bill Blair, the government's pot legalization czar, said Thursday in announcing the legislation. "In order to further protect Canadians, our government has committed to creating new and stronger laws to punish more severely those who drive while impaired by cannabis, alcohol and other drugs."

"This bill, if its passes, will be one of strongest impaired-driving pieces of legislation in the world and I'm very proud of that," Wilson-Raybould added. 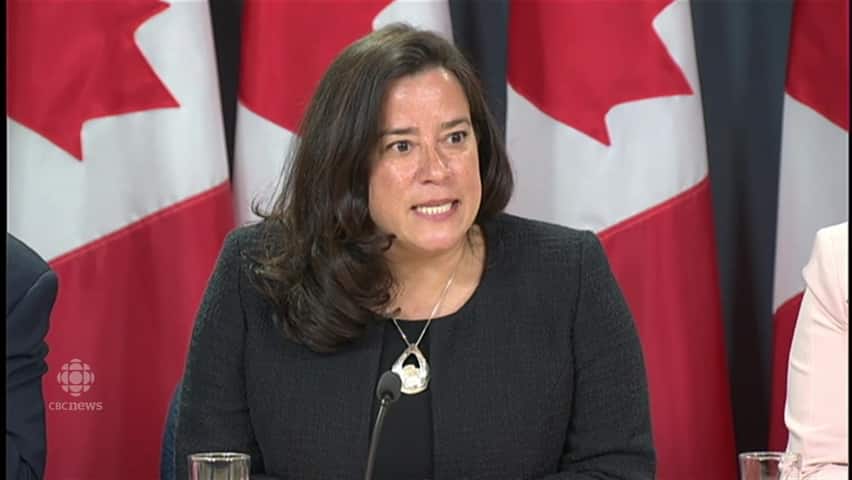 4 years ago
1:47
The federal justice minister says mandatory drug and alcohol tests for drivers will pass the Charter test 1:47

However, by comparison, the European Union has a limit of just one nanogram of THC, and the United Kingdom has a limit of two nanograms. Australia and many U.S. states have zero tolerance, which effectively criminalizes driving with any detectable level of prohibited drugs in one's body.

Some researchers, including those at the U.S.-based National Institute on Drug Abuse, have suggested there is simply no adequate way to measure THC levels, or to determine just how drugged a person is in a roadside test.

Those concerns were shared by Conservative leadership contender Erin O'Toole.

"Public safety officials at all levels of government have outstanding concerns about how to implement marijuana legislation and how to manage the costs associated with it. Of great concern, [Prime Minister Justin] Trudeau has not addressed the fact that there are no proven, reliable tests yet available for determining impairment from marijuana use," he said in a statement.

Police officers will also now be able to demand a breathalyzer sample from any driver they lawfully stop. Previously, a test could only be administered if an officer had "reasonable suspicion" that a driver was impaired by alcohol.

The government is making this change because its research shows many impaired drivers are able to escape detection at check stops. It is also aimed at reducing legal action over whether an officer actually had "reasonable suspicion" to ask a driver to blow on a device for a blood alcohol content reading.

I am confident of constitutionality of mandatory roadside testing.- Justice Minister Jody Wilson-Raybould

The changes are part of the government's efforts to "repeal and replace" all transportation-related offences in the Criminal Code, with "a modern, simplified and coherent structure," according to literature provided by Health Canada.

"I will, as I do with all justice pieces of legislation, be tabling a charter statement. I am confident of constitutionality of mandatory roadside testing," Wilson-Raybould said. "This is not a device or a tool that doesn't exist in other places in the world. In fact, mandatory roadside testing in many countries has significantly reduced the number of deaths on highways. I think that is of paramount concern," she said.

Loopholes to be closed

Currently, drivers can avoid fines or a criminal conviction by claiming they consumed alcohol just before or during driving, and thus were not over the legal limit at the time they were driving because the alcohol was not yet fully absorbed. They can claim it was only later, at the time of testing, that they reached an illegal blood alcohol concentration.

The government said, in a background document distributed to reporters, that it would close that loophole by changing the timeframe for blowing "over 80" from "at the time of driving" to within two hours of driving.

Over 80 refers to a blood alcohol limit of 80 milligrams of alcohol per 100 millilitre of blood, or as it is commonly known, .08 blood alcohol concentration.

The justice minister also announced changes to the provincial interlock programs, a system of in-car alcohol breath screening devices that prevent a vehicle from starting if alcohol is detected.

Currently, a first-time offender has to wait a year before being admitted to an ignition interlock program in order to be able to drive again.

The proposed legislation would reduce the time offenders must wait before they can return to driving; there would be no wait for a first offence, three months for a second offence and six months for a subsequent offence.